As Tinubu Lights Up Warri for Campaign… 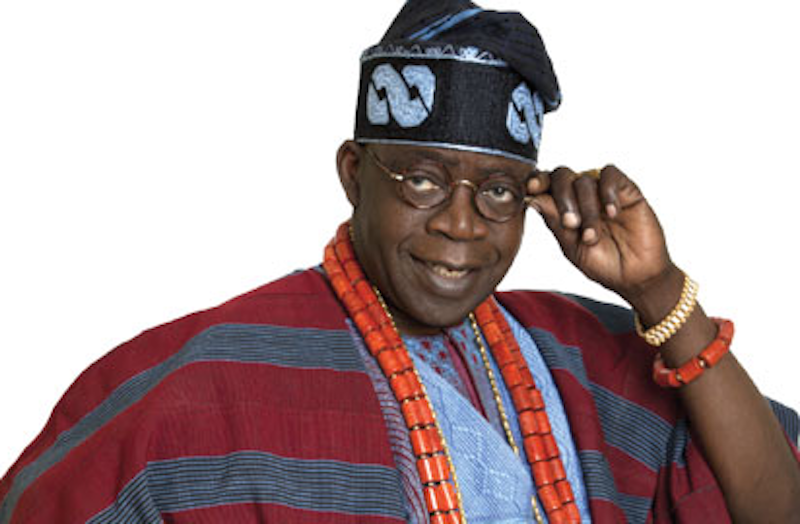 The presidential candidate of the All Progressives Congress, Asiwaju Bola Tinubu, has moved his campaign train to Warri, Delta State, with a pledge to turn the fortune of the oil-rich state around if elected president next year. Omon-Julius Onabu reports

In continuation of his nation-wide visit to the 36 states of the federation and the Federal CapitalTerritory, the campaign train of the  presidential candidate of the  ruling All Progressives Congress (APC), Asiwaju Bola Tinubu, last Saturday stopped over at the oil city of Warri, for the flagoff of the campaign in Delta State.

Whatever informed the selection of the venue over Asaba, the state capital, is clouded in mystery but the choice was justified by large turnout of party faithful and spectators at the Warri Township Stadium.

As it turned out, the visit certainly lived up to the hype or billing as a political visit of note. However, the reasons for such expectation are not far-fetched. Delta State is strategic not only as an oil producing state, it has remained in the firm grip of the Peoples Democratic (PDP), a rival party to the APC, since the commencement of the Fourth Republic in 1999.

It stands to reason, therefore, that a glance at Delta would make the APC to salivate especially in this season of politicking in the country. Put differently, Delta is one state that the party would do all within its power to “capture” or bring into the fold of APC-controlled states in the country.

Aside the economic importance of Delta even beyond oil – it has more than 163-kilometer coastline – the state has a sizeable population, and is ranked among the top ten states with the highest number of residents with permanent voter’s cards (PVCs), coming only next to Rivers State among the states of the South-South geo-political zone of the country in terms of eligible voters, going by the latest publication by the Independent National Electoral Commission (INEC).

Another reason for the attraction of Delta State to the APC and other political parties is the fact that it has a relatively sophisticated electorate, partly due to the high level of education among the residents. Delta is home to notable personages and captains of the financial and industrial sectors, including the Governor of the Central Bank of Nigeria (CBN), Godwin Emefiele.

Moreover, a notable member of the APC and Deputy President of the Senate, Senator Ovie Omo-Agege, is the candidate of the APC for the 2023 governorship election in Delta State. And, the incumbent, who hitherto served in the Senate of Nigeria, Dr Ifeanyi Okowa, is not only the Chairman of the forum of governors of the South-South geopolitical zone, he is also the Vice-presidential Candidate of the PDP, being running mate of former vice-president, Atiku Abubakar. Securing the state for Omo-Agege is a huge task the party is seeking to accomplish; and, the fact that the performance of the state’s gubernatorial candidate will definitely rub off on the polling fortunes of Candidate Tinubu.

It was, therefore, not unexpected that APC presidential candidate, Bola Tinubu, Delta gubernatorial standard-bearer, Senator Omo-Agege and other leaders of the party would direct their political hostilities and missiles at Governor Okowa, Atiku Abubakar and the PDP at both the state and national levels. As a matter of fact, speaker after speaker underscored the reason why Delta citizens or residents should accept and vote APC in 2023, with an outpouring of invectives on everyone and everything that is PDP.

All the déjà vu brickbats and promises

The presidential candidate of the APC, Tinubu, who promised to ensure an ecomically viable, stable and united Nigeria if elected president in 2023, took a swipe at his PDP counterpart, Abubakar, claiming that since the former Nigerian customs officer was disloyal to then president Olusegun Obasanjo, under whom he (Abubakar) was deputy, the PDP candidate should not be trusted with power as the number-one citizen of the country.

Tinubu who witnessed the inauguration of the Delta State APC governorship campaign, promised better days for Deltans with him as president and Omo-Agege as the governor.

He however observed that the level of development in Delta was not commensurate with the amount of money coming into the state from the Federation Account and sundry financial support from the Federal Government especially under President Muhammadu Buhari.

Tinubu, who also promised  to revive the gas and industrial sector as well as the local ports in the state, added that Delta could rank with Lagos State, where he (Tinubu) was governor over 15 years ago, if the people voted the APC and do away with the PDP.

The former two-time governor of Lagos state said, “I will fulfil promises to you (referring to Nigerian youth). You are the future of this country. Your dreams will be realised for a stable and united Nigeria.

“Warri is going down. They don’t know the way; they don’t have the vision, the brain, the knowledge, the road to prosperity. Go to Lagos and see development and records of beautiful people. Hope is here, development is here, progress is here, Omo-Agege is here and prosperity is here.

“These people year after year; election after election, lie to you. They borrow money and celebrate market stalls. Where is the housing industry? Where is the opportunity to create jobs? They don’t have shame!

“When Atiku was there, he was fighting his boss in public. They were telling us how they spent PTF money to buy cars for their girlfriends. Do they have shame?

“Delta is among Nigeria’s largest oil and gas producing states. Revenue from oil and gas has historically been the backbone of government revenue and foreign exchange earnings.

“As such, your state and other oil producers have made a one-of-a-kind financial contribution to the building of modern Nigeria. The nation is thankful to you.

“Our government will further re-activate the multi-billion dollar gas revolution industrial park project. President Buhari’s administration has made great strides in revisiting this project. We will complete it.

“Gas will become a national priority. I envision fertiliser and petrochemical plants, aluminium smelters and methanol plants, all creating jobs for the unemployed, while producing goods that bolster farming, construction and other industries.”

On the state’s infrastructure development, Tinubu said, “We will help develop the infrastructure of your state. The deep seaport project and the Omadino-Escravos Road project will be revisited. We will rehabilitate Warri, Koko, Sapele and Burutu ports, creating yet more jobs in the state.”

Nonetheless, Tinubu, who was in company of his wife, Senator Oluremi, the APC vice-presidential candidate, Kassim Shettima, the Senate President, Ahmed Lawan and some state governors, however, lashed out at the PDP presidential candidate, describing him as a migrant politician who spends more time in Dubai in United Arab Emirates, while also alleging that Governor Okowa was allowing him (Abubakar) to use Delta’s Treasury as the ATM for his 2023 presidential campaign.

“Your son (Omo-Agege) has gone to Abuja as you wanted him to, and he has done so remarkably well. He is someone who can work with anyone, he has worked with us. I have been working with him and I can tell you that if you vote him as the governor of Delta in 2023, this state will be competing with Lagos state and Yobe.

“Today, the Warri-Itakpe rail line is functioning. You are being given tertiary institutions in Delta state by the federal government and so many other projects,” the Senate President said.

In the same vein, the Deputy President of the Senate, and Delta APC governorship candidate, Omo-Agege carpeted Governor Okowa, liking his alleged betrayal of Southern Nigeria to the action of the biblical Judas Iscariot, who betrayed his master, Jesus.

“We don’t tolerate traitors. We don’t like treachery and we don’t like traitors,” he asserted, describing Okowa’s vice-presidential ambition as ill-timed and bound to fail.

Nevertheless, the Delta State Government has dismissed the litany of allegations levelled against Governor Okowa, the PDP and its presidential candidate, describing the APC as a party of lies and failed promises, which should be rejected by all well-meaning Nigerians in 2023.

Spokesman for the Atiku Abukakar/Ifeanyi Okowa campaign organisation, Mr Charles Aniagwu, told THISDAY in Asaba that everyone in the country was aware that the APC-led Federal Government was “responsible for the hardship and hunger as well as pervasive insecurity in the land today”, wondering why the APC presidential candidate could only refer to Lagos, a former seat of government in Nigeria whereas there are many other states currently controlled by the APC but where people were openly praying for restoration of power to the PDP.

Aniagwu reminded Tinubu and the APC that the road to Warri Stadium and the other deplorable roads across the state, including the Ughelli-Asaba dual-carriage way that the Okowa administration is presently constructing, are all federal roads.

According to him,  the people of the state were generally appreciative of the development strides of the governor since the inception of the administration, adding that Delta State could not be compared to Lagos State which a single man, Senator Bola Tinubu, had pocketed and made an extension of his private estate.

Aniagwu said, “Need we remind Nigerians that the man talking about integrity is somebody whose identity is still unknown, still shrouded in secrecy?Those close to him should advise him to first go and clear himself; when and where he was born, the schools he attended and other records about him so we can know who we are talking about or responding to.

“Somebody whose records are still in doubt cannot be the one talking. Our state cannot be in his pocket the way he did Lagos. Delta is not Lagos and our people cannot be deceived by such a person.”

Similarly, the Chief Press Secretary to the governor, Mr Olisa Ifeajika, described as baseless allegations that Governor Okowa had mismanaged funds that had accrued to Delta, stressing that Okowa has been acknowledged the world over as a prudent administrator and manager of the state economy.

“Without sounding immodest, I must say we have a lot of infrastructure on ground to show for all the money that accrued to the state, ranging from roads to bridges, schools and human capital development. Indeed, some of these projects were inaugurated by very high-ranking federal government functionaries who are also members of the APC. And, that is aside from the fact that Delta has about the largest workforce in the country.”