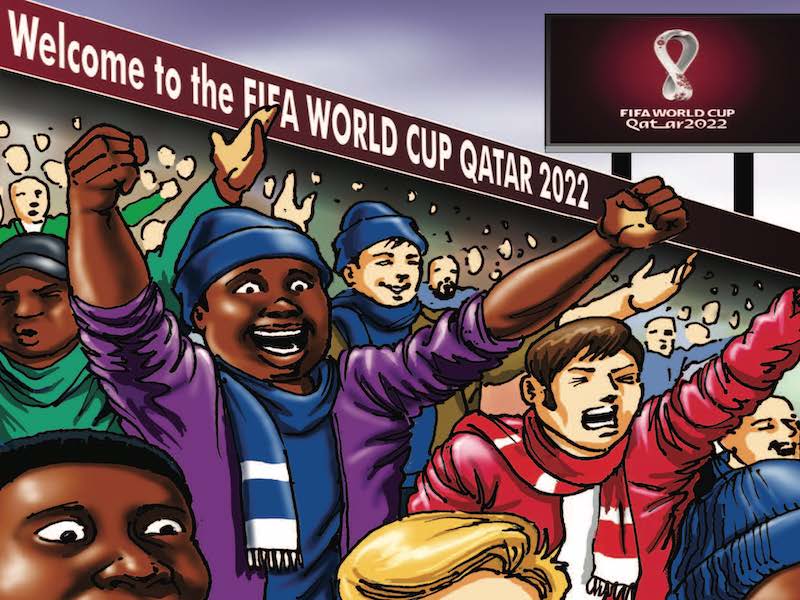 The 22nd edition of the FIFA men’s World Cup tournament is scheduled to kick off today in Doha, Qatar. In every ramification, this edition is quite different from any that has been held since the 1930 inaugural tournament in Uruguay. It is the first time this global football showpiece will be taking place in the Middle East and the Arab world. For the first time also, the World Cup will be played during the Northern Hemisphere mild winter months of November–December outside the usual June-July schedule. With the farthest venue barely 20 minutes away from the city centre, the tournament will last only 29 days, making it one of the shortest in more than four decades. The final of the tournament will be played on 18th December with 32 countries competing across 64 matches.

Meanwhile, Qatar got the hosting rights in 2010 after beating off stiff competition from the United States and Australia. The gulf nation, of less than three million people has spent over $200 billion in providing the eight match venues, hotels, roads and other supporting state of the art infrastructure that will ensure the success of the quadrennial tournament.  But Qatar 2022 has been a polarising choice with many openly questioning the propriety of hosting the World Cup in the Persian peninsular. For several years, the decision has been criticised by football stakeholders across all divides. Corruption allegations were heaped against FIFA executives in the award of the tournament to Qatar. That is aside the country’s human rights record and the treatment of the 30,000 migrant labourers, who endured difficult conditions to build the stadia.

The logic of playing 64 matches in venues separated by a maximum radius of 46 miles and in a country that is less than one-sixth of Niger State in Nigeria in landmass has been questioned. It has already disrupted the international football calendar and forced many leagues in Europe to reschedule many fixtures in order to accommodate the tournament. In order to lessen the effects of the soaring heat on the spectators and teams, all the venues have been fitted with air conditioning and cooling technology. But there is the challenge of accommodation in a small country.

However, whatever the backlash against the choice of Qatar, it still does not take the shine off the World Cup as the most coveted football tournament in the modern era. FIFA president, Gianni Infantino has written to all 32 competing nations, urging them to “let football take the stage” in Qatar. From today, that’ will be the reality. Countries derive absolute pride in qualifying for the event while winning the World Cup is considered the ultimate benchmark to measure nationalism. Eight countries; Uruguay, Brazil, Italy, England, Germany, France, Argentina and Spain have lifted the trophy since inception. Of the pack Brazil is the most successful nation having lifted the trophy on five different occasions while Germany has four victories.

Coming home, missing out of the global showpiece is a real blow for Nigeria, which failed to secure its seventh qualification for the World Cup after it failed to secure one of Africa’s five slots, following defeat by perennial rivals, the Black Stars of Ghana. Indeed, the Super Eagles non-qualification for Qatar 2022 makes it the first time the three-time Africa champions will be missing on the world’s biggest stage since the 2010 edition in South Africa. In monetary terms, Nigeria will not be getting a share of the $440 million windfall in prize money given by FIFA for the 2022 World Cup in Qatar. The Eagles will also miss the participation fee of $1.5million paid to every participating country and $13 million they stand to receive if they advance into the round of 16.

While the setback may be a disappointment for the country, the current situation is an opportunity for our football administrators to reset the cue button and develop our football. Indeed, this is the time for us to commence preparations for the 2026 World Cup to be jointly hosted by the United States, Mexico and Canada.