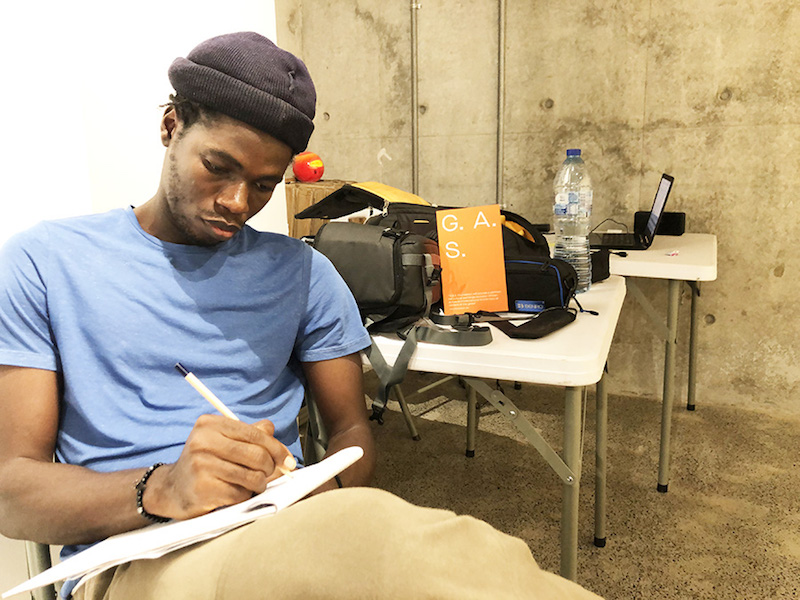 An alumnus of the G.A.S. Foundation, Lagos residency programme, Ofem Ubi, launches himself on the cusp of a promising creative career with the publication of a poetry collection and a solo exhibition. Okechukwu Uwaezuoke writes

From as far back as Ofem Ubi could recall, loss—or rather the sense of it—has always stalked him. In a sequence of experiences dredged up from his 26 years of earthly life so far, they flared before his mind’s eye, steeped in their familiar dread and sadness. He had once nearly lost an eye, lost both of his parents in quick succession, had blood loss after having his head pulled from between decorative bricks, and so on. Then there’s also the gnawing dread of encounters with the law-enforcement officers that could lead to his losing his braided hair, which he describes as “a forest sitting on my head,” among other things.

This sense of loss, which spawned his soliloquies about grief, has now been transformed into his recently published, 45-page poetic musings, lavishly illustrated with his photographs. “I reckon that grief is a universal feeling and we all have our bouts of gloom,” he says. “Sometimes we need a kick-starter, something to set the table for these kinds of conversations to be had. Grief is [as] light as it is heavy; it embodies all the characters you could ever think of, and I tried to personify it in my book.”

Ubi is gratified by the fact that the collection, titled The Last Time I Called, the First Thing I Heard Was “As-Salamu Alaykum,” and published by DeftTouch Publishers in Ibadan, has so far done better than he had hoped for. “My losses are a mirror from where the readers reflect and find a semblance of their own,” he continues. “I believe that the exercise of introspection through my ordeals makes it less scary and approachable for anyone. The reactions have been a dream, and having people share with me what it has done to them is a blessing I’m utterly grateful for.”

A lifelong predilection for the fluidity of language has been the theme song of this Cross River State native’s creative odyssey. This is a trait that would later manifest itself through his passion for literature, which peaked in his secondary school years. It was indeed at a young age that he realised that he was more drawn to history, literature, or any other subject that inspired him to write than he was to the sciences. Besides, the idea that words are repositories of meaning captivated his receptive young mind and sparked his interest in literature. After graduating from secondary school in 2012, it was just a matter of time until he moved on from reading poetry books to penning down his own poems.

Back in Senior Secondary 2 at the Hope Waddell Training Institute in Calabar, he recalls calling out to the literature in English teacher, a female corps member, to read from George Bernard Shaw’s Arms and the Man before the class. “I love how you read,” the highly impressed teacher told him, and her commendation became the catalyst for a future literary career.

This literary career, nourished by the love of poetry, continued to blossom as more opportunities, one of which was his feature on a local radio station, offered themselves to him. “I love how it gives you the avenue to unpack. When you read and begin to decipher each line, you’ll discover that each line has a meaning of its own. It’s a very engaging art form in itself.”

Ubi’s artistic work currently pivots on a tripod made up of poetry, photography, and video. His poems are frequently incorporated into his videos as voiceovers, embodying the story and direction of the moving pictures. As for the still images, he creates them on film sets in the most cost-effective way possible to maximise his resources. “Poetry became that infrastructure, aiding me to converse with myself and confront the things I had always wanted to but didn’t have the right tool for. Photography on the other hand had always been a form I admired, a form I would go on to use as a visual aid for my poems in my early writings. I had begun to explore the concept of documentation in poetry during the lockdown, but I also wanted to do that through other means respectively. My photography erupted from my penchant for the perseverance of memory. I began to take still images during that time¬¬- pictures of home and the bodies that occupied it, that ultimately led to my exploration of moving image.”

Ultimately, he discerns a relationship between all the art forms. And he means that in the sense that they all have something to say. “I find the confluence between poetry and photography in how they complement each other at evoking comprehension. A poem is a literal image, an image is a visual poem. When you put these two together, I think what it does is that it drives the idea further and farther.”

The 2019 Cross River State University mass communication graduate is currently working on larger projects and determining how to allow each art form to breathe as a stand-alone medium capable of carrying the artist’s message without one art form scaffolding on from another. He’s also dabbled in prose, which he says allows a writer to narrate to his or her heart’s content.

Alongside Hava Aslam, Femi Johnson, Emma Prempeh, and Uzor Ugoala, he flagged off Yinka Shonibare’s G.A.S. Foundation’s inaugural residency programme. A friend, whom he simply identified as Ekemini, had shared the application form for the Foundation’s residency programme with him over WhatsApp. “According to him, I was the first that came to mind immediately; he set his eyes on the opportunity, and he thought I would benefit from it if I got in. I got in!”

During this residency programme, Ubi savoured the freedom to explore, experiment and express. “G.A.S. provides you with the mental scaffolding to be yourself, and that ease ensures the possibility of anything. If I ever felt any pressure, it was self-induced. It is a fantastic and warm space in the way it lets you bloom as a creative person, and I’m glad I got to be a part of its tremendous artist programme. Of course, the fruits of my residency are evident, so it was a huge period for me—not just in creating but in learning more about myself, my work, and my creative reaction to spaces of that nature.”

His first-ever solo exhibition at the G.A.S. Foundation in Lagos, whose private viewing was on Wednesday, September 7, became the crowning point of his career’s highlights so far. That was also the day he published his first collection of poems. “Seeing the work of your hands in tangible form and up in lights is as big as it gets at this point, at least for me,” he reminisces. “What starts as a seed in your mind becomes something you finally get to bring to life, talk about, and have people listen to, appreciate, and contribute to—that is huge.”

The fact that Ubi first looks to his experiences, accomplishments, and self for inspiration is evident in the fact that most of the works he has ever produced were drawn from memories of stories and experiences that either belong to him or to which he can relate. “My familiarity with them guides in the audacity and starkness I employ in telling them. So, me first and then everything else. I think it is imperative that we find a connection to the stories we tell, it makes us more inclined to tell them honestly because we see ourselves in there somewhere.”

Nonetheless, he greatly admires such art personalities as Caleb Femi, Jolade Olusanya, Shade Joseph, Theresa Lola, Helen Salomao, Yomi Sode, George Mpanga, Tyler Mitchell, and Sean Tucker, among others, because of their multifaceted art forms and the fact they challenge him with each new work, which inspires and spurs him to diversify and test new territories. “I’m specifically astounded with how they continually shift the boundaries of their art forms and open new worlds for me,” he adds.

As for his typical day, he spends his time making sure that each day is as productive as possible. And this depends on what he has on his to-do list. He is content to live each day as it comes and is unconcerned about where his career will take him in the future. “I do not wish to perturb myself with the ache of foresight,” he explains. “I just want to be consistent and better at this – at this God-given chance of making meaning with my time on here. The good thing is that one can never go wrong with consistency, so I’m certain the future is a good place. I’m more concerned with my now, it is all I have and I must nurse it with all I’ve got.

“I’m continually open to newer artistic landscapes and the possibility of making work through them because I believe in the beauty that emanates from multi-disciplinary endeavours. And if I can do that, why not?”