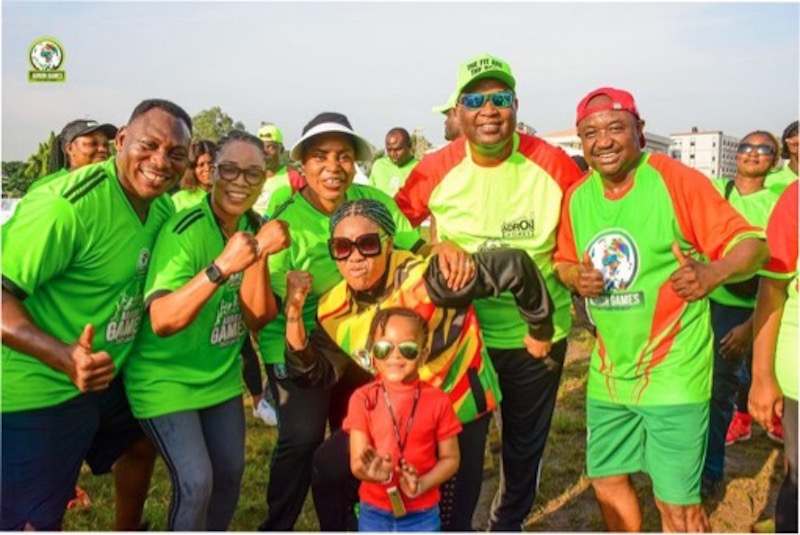 Gateway Region has emerged winners of 2022 Adron Games which took place at the Yaba College of Technology, Lagos from Thursday, November 10 to Saturday 12, 2022, carting home six gold medals, three silver and three bronze medals, after sterling performances in a series of track and field events.

In what could easily have passed as a Corporate Olympic Games, the regions of the real estate company, Adron Homes and Properties Limited in the country converged in Lagos for the games, and were engaged in different sporting events to mark the 6th edition of the annual games.

Speaking at the opening of the games, Group Managing Director and Chief Executive Officer of the company, Dr. Adetola EmmanuelKing pointed out the importance of sports within the corporate world saying it was the key to building a better future.

According to him, “The importance of Sports is universally upheld. It is the key to building a better future, hence its relevance even within the corporate space cannot be overemphasized. We often take sports and leisure for granted. Yet millions of people around the world do not have access to sports, or are actively denied their right to participate. We all admire the athletes and achievements on display during every global sporting event.”

Speaking further on the rationale behind the games, EmmanuelKing averred, “The 2022 Adron Games is even more pertinent in this period of when there is an increasing global focus on mental health wellbeing, our Adron Games aimed at the promotion of physical fitness and indeed mental wellbeing could not have come at a better time”.

Usually, a big and inspirational part of the event each year, different sports icons in the country are honored by the GMD/CEO of Adron Homes in recognition of their contribution to the sporting glory of the nation, who can also serve as role models influencing good and healthy living by encouraging sporting exercises in the corporate world as a win-win strategy for ultimate effective productivity. The Ambassadors of 2022 Adron Games, Daniel Amokachi, Tijani Babangida and Chioma Ajunwa were present throughout the 3-day games.

A football match between Ex Super Eagles Internationals and Adron Contractors which ended in a one-all draw saw Daniel Amokachi re-enact his goal- scoring dance which sent the spectators in a cheering frenzy. Among the ex-Nigerian internationals apart from Dan Amokachi and Tijani Babangida were Victor Aghali, Willie Opara, Wasiu Ipaye, among a few others.

Speaking on the effect of the games, Babangida said, “It’s a laudable concept and the GMD/CEO is trying to make his workers wake up to the importance of sports to health and productivity. So, he does this mini-festival to bring all his workers together each year for bonding; some are runners, some footballers, cyclers and so on which is very good.”

There was also another exhibition match between Lotus Bank who are one of the partners of the games and Adron All Stars.

Of the value they bring to the games, Amokachi said, “Well, it is also an opportunity for many people who have been seeing us from afar to get to meet us and it has some measure of value because when you talk about sports, you always need an icon around at least to speak.”

Ex Nigeria track and field queen Ajunwa was full praise for the Adron Homes CEO for such rare passion in adding value to lives.

“Honestly, I thought it was just workers coming together just to keep fit but I’m speechless because even some states cannot do what an individual is doing. Look at what happened today; some boys danced, school children danced and he gave them plots of land. If our sports administrators had this kind of passion, I tell you Nigeria would always be the country to beat.

“He’s the sort of person we need in the sports ministry, you can see the passion; a person who wants to improve, who wants to give so that lives can be transformed. It’s not because he has too much. I must say I am deeply touched because that is what sports is all about.”

The games ended in a crescendo with the GMD/CEO taking to the dance floor with his ever-supportive better half, Olori Aderonke EmmanuelKing as well as other acts and final games, dancing competition and raffle draw to which medals and several other awards including cash and lands were doled out to various winners by sports celebrities,  Ajunwa, Amokachi, Babangida as well as other Executive Directors , Oluwakemi Olaniyan and Barrister Ademola Koko and the GMD/CEO, who also gave the vote of thanks to mark the end of the games.