2023: Tinubu Absent as Atiku, Obi, Kwankwaso, Others Sign Peace Accord 14 hours ago

Buhari to Judges: Be Impartial Arbiters in Election Matters 14 hours ago 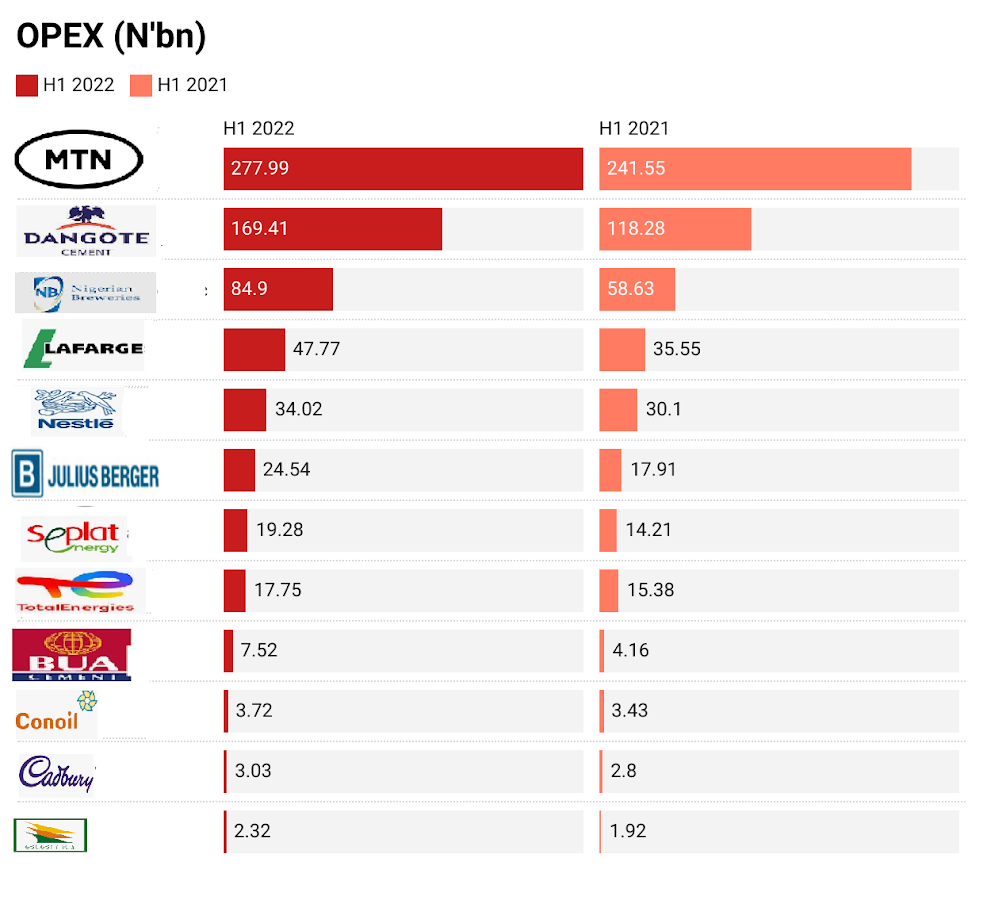 On the back of rising inflation rate and shortage of foreign exchange (FX) in Nigeria, Dangote Cement Plc, MTN Nigeria Plc and 12 other companies incurred a whopping sum of N2.25 trillion as operational costs in half year (H1) ended June 30, 2022, representing an increase of 27.3 per cent from N1.77 trillion reported in half year of 2021.

Inflation rate in Nigeria hit 18.6 per cent as at H1 2022 from 15.6 per cent the National Bureau of Statistics (NBS) reported in January.

The Bureau on Monday reported further hike in inflation rate to 19.64 per cent, highest in over 17-year.

Latest results released by companies listed on the Nigerian Exchange Limited (NGX) reveal that rising cost of goods and services is eating into profit at levels not seen since 2017.

A cursory review of some of the H1 2022 results published by some of Nigeria’s largest companies reveals higher input and operational cost on a year-on-year basis.

Despite hike in cost of sales and operating expenses (OPEX), most of these companies recorded contraction performance across construction, manufacturing, petroleum marketing and Fast-Moving Consumer Goods (FCMGs).

These companies spent heavily on power, and raw materials in H1 2022 as cost of energy surged significantly across most countries in the world. Notably, cost of diesel sold as high as N850 per litre in some areas of the country, while some firms had to cut down on working hours in order to manage costs.

The Chief Executive Officer, Dangote Cement, Michel Puchercos, in a statement said,  “Despite the elevated inflation due to a very volatile global environment, the first half of 2022 has been positive.

Puchercos explained further that significant increase in energy and Automotive Gas Oil (AGO) costs are impacting negatively on production and supply of cement products.

According to MTN Nigeria, “OPEX increased by 15.1per cent due to the effects of Naira depreciation and higher dollar Consumer Price Index (CPI) on lease rental costs, the acceleration in our site rollout and rising energy costs. The escalation of diesel prices in Nigeria contributed to the 12.2per cent increase in direct network operating costs with a 0.3pp EBITDA margin impact.”

In the same vein, Nigeria Breweries, the country’s largest brewer also recorded a significant spike in cost of sales and operating expenses during the year.

According to analysts at the Economist Intelligence, prices of global commodities, including energy, are rising rapidly and fuelling runaway inflation and instability in much of Africa including its most populous nation, Nigeria.

They added that the cost of living crisis is being exacerbated by the Russia-Ukraine conflict which have resulted in sanctions, airspace bans and security aggravating pandemic-related supply-chain difficulties.

Besides inflationary pressure, the marginal increase in Naira against Dollar exchange rate in the official market also resulted in the hike in general prices of goods and services in the first three months under review.

Commenting, the CEO, Centre for Promotion of Private Enterprise (CPPE), Dr Muda Yusuf, said inflationary pressures remain a key concern in the Nigerian economy, both for businesses and the citizens.

He highlighted that implications of high inflation rate include escalation of production and operating costs for businesses, leading to erosion of profit margins, drop in sales, decline in turnover and weak manufacturing capacity utilization, high food prices which impacts adversely on citizens welfare and aggravates poverty.

He explained that the major drivers of inflation and cost in the economy include exchange rate depreciation, which has a significant impact on headline inflation, “especially the core sub index and liquidity challenges in the foreign exchange market impacting adversely on manufacturing output.”

To tame the current inflationary pressure, he urged government to reform the foreign exchange market to stabilize the exchange rate and reduce volatility and address foreign exchange liquidity issues through appropriate policy measures.

On his part, analyst at PAC Holdings, Mr. Wole Adeyeye said that the operational cost of most companies increased significantly in H1 2022, driven mainly by higher input costs.

According to him: “The upsurge was witnessed in inputs sourced locally (especially raw materials & consumables, fuel and power consumed, distribution expenses, among others). In addition, most listed companies complained about the depreciation of Naira as it raised cost of imported raw materials during the period.”