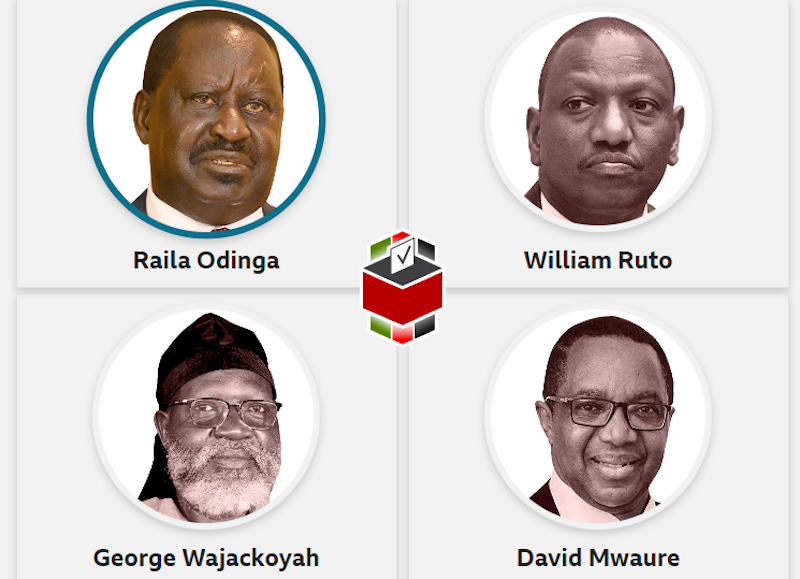 With more than a third of the results from Kenya’s presidential election now confirmed, the two main candidates are running neck and neck.

The head of the electoral commission, Mr. Wafula Chebukati has admitted that announcing the result of Tuesday’s election is too slow.

The verification of results has been stopped several times after complaints by supporters of the main candidates.

Odinga’s supporters have disrupted the result verification process several times and accosted some of the electoral officials, accusing them of tampering with the vote.

Riot police have been deployed inside the building to reinforce security. The results of 113 of the 292 constituencies have now been officially verified.

Previously, media organisations have been releasing provisional tallies using official data from the 46,000 polling stations. They also show a tight race between the two candidates.

About 14 million votes were cast – a turnout of 65 percent.

The electoral commission has until Tuesday 16 August to declare the winner.

“We have to make adjustments” to quicken the process of verifying results, Chebukati said in his latest briefing yesterday.

“It’s taking three to four hours” to process the result from a single constituency, he said. “Some of our returning officers have stayed here for three days sitting on chairs which is totally unacceptable.”

“We believe that this will fasten the process and we should be able to dispose of the returning officers in the course of today,” Chebubati said.

Extra police officers have also been drafted in.

Media tallies of results from more than 46,000 polling stations – posted on the electoral commission’s website – have also caused some confusion in the country because the counts didn’t match.

Officials denied claims on social media that fake results had been posted after the system hosting the results was hacked.

“Nothing like that has happened. It is misinformation,” said the electoral commission’s CEO Marjan Hussein Marjan.

Based at a cultural centre called Bomas in the capital, Nairobi, officials from the Independent Electoral and Boundaries Commission (IEBC) are busy verifying results.

Security has been enhanced at the venue and access to the compound limited. Electoral officials are comparing photographs of result forms from the polling stations to physical forms that officials have brought to the centre to ensure the results match.

This painstaking effort has seen Chebukati accuse agents from the main parties, who are witnessing the process, of turning a straightforward exercise into a “forensic” one.

There is a sense of anxiety in the country as disputed elections in the past have led to violence or the whole process being cancelled.

In 2017, huge logistical errors led the Supreme Court to annul the result and order the presidential poll to be re-run.

Officials are under pressure to get things right this time.

The country often grinds to a halt during elections, activities across the country have slowed and schools remain closed at least until next week on Monday. In Nairobi’s central business district, the usually busy streets are mostly deserted.

Allegations of election rigging are as old as the country. It was part of politics even before multiparty elections were re-introduced in the 1990s, but the push for free and fair elections has never faltered.

After the violence that followed the 2007 election, political parties and activists argued for the use of technology instead of physical registers, which could be easily manipulated, to verify voters.

This year’s election is the third time technology has been used but it has yet to deliver an election that has not been challenged in the courts.