Buhari: Nigerians Owe Our Military Debt of Gratitude as Remaining 23 Train  Victims Are Freed 1 hour ago

Oshiomhole: I Can’t Speak on Tinubu’s Health Because I’m Not a Nurse or Doctor 5 hours ago 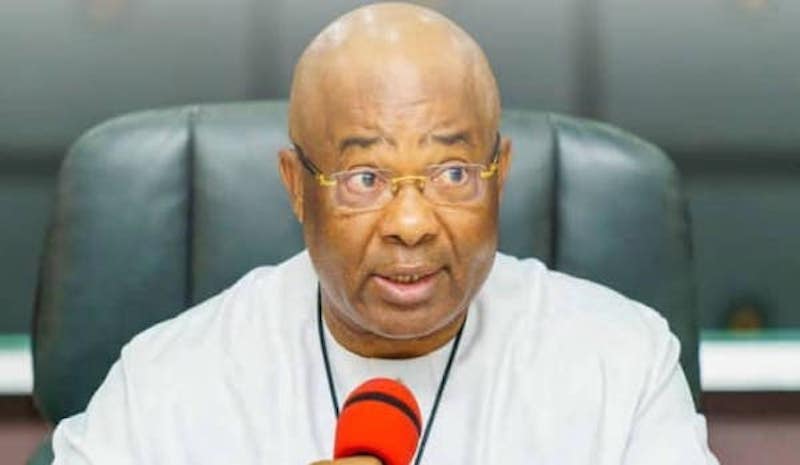 Imo State Governor, Senator Hope Uzodinma, yesterday lent his voice to the current issues in the nation’s polity saying the recurring incidents of insecurity and crude oil theft across the country are more challenging to the nation’s survival than the all Muslim presidential ticket of the ruling All Progressives Congress (APC).

The governor also took a swipe at the World Bank for its prediction that the nation will in a matter of time break up.

Answering reporters’ questions after a meeting with President Muhammadu Buhari at the State House, Abuja, Uzodinma stressed that the current insecurity as well oil theft which he described as anti-national interest, were more pressing than the controversy over the one faith presidential ticket of the APC.

He said, “I want to use this opportunity to invite you people to prioritise our area of interest. First, the mood of the country today is not about who the candidates are. The mood of the country is that two or three years ago, we were producing 2.1 million barrels of crude oil every day. For over 12 years, that has been our main source of foreign exchange. Suddenly, because of the activities of those who are anti-national interest, we’ve lost over a million barrels and barely managing to produce 1 million.

“I think we should rise in unison to condemn the activities of crude oil theft by anti-Nigerian interest groups and bring back the economy of the country. Because you have to have a country first before you have a president.

“Look at the quantum of banditry going on in Nigeria today. To the extent that bandits are courageously even coming into the capital city. We should rise in unison and condemn these activities.

“The primary purpose of government is for the security of lives and property and the welfare of our citizens. To what extent have we supported federal government in achieving this primary purpose? Those are things that should occupy our minds now. But if you throw Nigeria into a situation where religious dichotomy, ethnic jingoism will be at the front burner, it means you are working against Nigeria.

“So let us allow political parties who have chosen their candidates, no matter the religion where they come from, to go out and do their campaign. It is left for the electorate to reject the ticket by not voting for them. Or accept the ticket by voting for them. But if we continue to make these things headlines, you are heating up our polity unnecessarily. I want to beg you in the name of God, let us save our country.”

On second hand, you will recall that Alvan Ikoku College of Education prior to 2015 was taken over by federal government. The process started under the regime of the late President Yar’Adua, completed by President Goodluck Jonathan and in 2015, it was placed on hold.

“Now that the school has met with all the requirements expected of them, I have come to plead with Mr. President to direct that the hold be lifted, so that Alvan Ikoku College of Education will become Federal University of Education Owerri. I am so excited that Mr. President gave me assurances that these two requests will be approved.”

Commenting on the prediction by the World Bank that Nigeria will break into pieces, Uzodinma said this will not be the first time such prediction will be made by the bank saying it made similar predictions some 25 years ago.

He said the World Bank was free to come up with any indices on Nigeria’s economy adding however that the Central Bank of Nigeria is better place to know more about the nation’s economy than the World Bank.

He said, “Even 25 years ago, before 1999, World Bank has always said Nigeria will break into pieces and today Nigeria has not been broken into a half piece. This country is loved by God and our faith in God has been keeping this country.

We have had friendly enemies as partners, both internationally and nationally, but yet Nigeria continues to exist. There is nowhere in the world you will go and the gas stations you will see are not Shell, ExxonMobil, Texaco (Overseas), all the major oil producing companies. It is only in Nigeria that you will hear languages like independent market, Okafor & Sons Filling Station and all that. What is the World Bank saying about that?

“A refinery is a process plant that requires just routine maintenance and cleaning, but here we spend billions of dollars to do what they call turnaround maintenance. If you have been to the United States, Texas in particular, where crude oil production is heavy, when you are arriving Houston Airport, look at the environment; they plant vegetables, farmers live there, an environment where they produce crude oil.

“So, they are making a mockery of us and if we don’t rise up and address our challenges, nobody, I repeat, nobody, will do it for us. We have to define our country, we have to identify, collectively, our national interest so we can also collectively defend it.

“Our own bank is Central Bank of Nigeria and we are going to look up to them to come up with policies that will protect and secure our economy.”