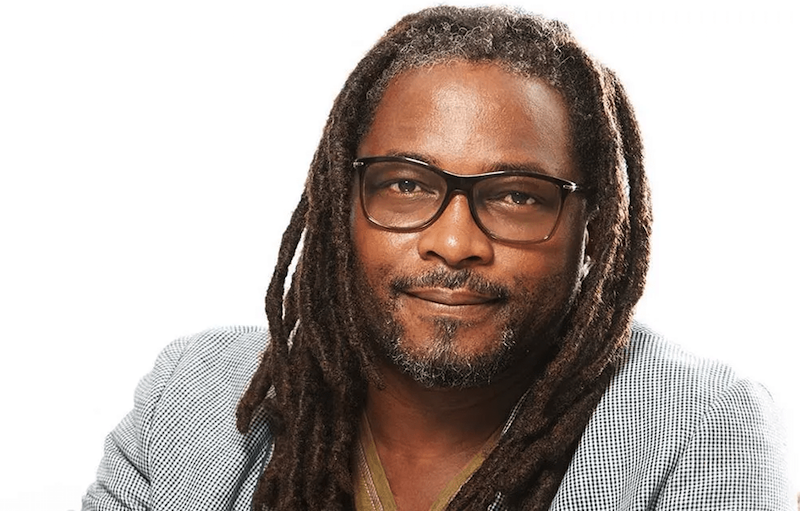 It was in 2013 at Bogobiri Hotel in Ikoyi, Lagos that this reporter had the privilege to interview the late cerebral storyteller Biyi Bandele alongside the then Glitterati editor Nseobong Okon-Ekong. The interview was facilitated by his publicist at the time, Adeoye Bobo Omotayo.

Bandele painted the picture of a rock star with his long locs and boots as he sat cross-legged on one of the sofas. We did not hesitate to ask him if people often get that impression of him when they first encountered him. He laughed gently and said:

“Quite a few people get to think that I’m a musician. But you know, I’m an artist and I live the life. But I still choose to write and direct.”

And he did that till he passed on Sunday, August 7 as relayed by his family. By the time the news broke on Monday night, not a few people penned down lovely thoughts and memories about Bandele, who is famed for many literary and motion picture works.

“I am still speechless,” said Odugbemi in a recent chat.  “We live in very confounding times indeed. He was a special talent and really one of those generations of storytellers whose talent had the depth to excel in literature, theatre, documentary and cinema. He was a keen social observer who created culturally inspiring narratives that deepened meaning in the nuances of the human journey.”

Bandele grew up surrounded by tales of war. His father who was in the army regaled them with second world war stories, particularly the famous Burma expedition with the British army. Those tales were like guiding light, leading Bandele to write a fiction story ‘Burma Boy’.

Born in Kafanchan, Kaduna State, on October 13 1967, Bandele studied Dramatic arts at the University of Ife and during his studies won the BBC Playwriting Competition. He moved on to London and worked at the Royal Court Theatre where the likes of Wole Soyinka built his career. There he met with a famous director Danny Boyle, who was back then just a stagehand. He started writing before the age of 12.

His film career was notable for works such as the film adaptation of Chimamanda Adichie’s novel on the Nigerian Civil War ‘Half of a Yellow Sun.’ He also directed the MTV Base lifestyle TV drama series ‘Shuga’ and worked with Mo Abudu on some EbonyLife Films productions such as ‘Fifty’ and the latest Elesin Oba: The King’s Horseman’, an adaptation of Wole Soyinka’s classic ‘Death and the King’s Horseman’. The latter will premiere at the Toronto International Film Festival (TIFF) in September.

Award-winning screenwriter James Amuta who worked with him in ‘Elesin Oba: The King’s Horseman’ is still grappling with the news of his death.

“It’s particularly sad for me, because the last time we saw, he hand-delivered an autographed copy of his book ‘The King’s Rifle’, and wanted to adapt it for the screen. He reached out and wanted me to read the book. This was after we had done ‘The King’s Horseman.’ He wanted to do a lot more work in Nigeria,’ he said.

Bandele was a notable writer with books such as ‘The Sympathetic Undertaker’. Amuta disclosed that part of his last conversation with the deceased included books.

“We spoke about the books we loved, especially from the African Writers Series and how great it would be to adapt some of those stories for the screen. We had mutual respect for each other’s work. My first book, an anthology of poems ‘Enigma: Beyond the Poet’ also came up during the discussions we had. So there we were two creative minds who have come from the literary world into the world of film, plotting and planning on what we could do to elevate the art of African storytelling. His demise is a very serious blow…because I know what he was about to unleash to global audiences.”

Recalling one of their encounters on the set of ‘Blood Sisters’, another production of EbonyLife Films, Amuta said: “We had worked very closely to achieve the opening scene of ‘Blood Sisters’. I remember he had come to me, requesting a very culturally authentic location that would give that scene its energy and element of danger…and he wanted to be very ambitious with the way the scene was captured, and that night, I saw how brilliant his mind was – how he incorporated actual passersby into the scene, integrating them with our extras – and that scene came alive.”

“Biyi had an eye for a story, was always passionate about his work, and had a great love for Yoruba culture.”

contribute to the industry in Nigeria.”

For him, his film adaptations will “stand tall as flashpoints in his career that will inspire future generations in Nollywood. That’s a man who understood his responsibility to give back to Nigeria and to represent her stories with global best practices. It is good news that he left behind such a body of work that is a proud legacy for any storyteller.”