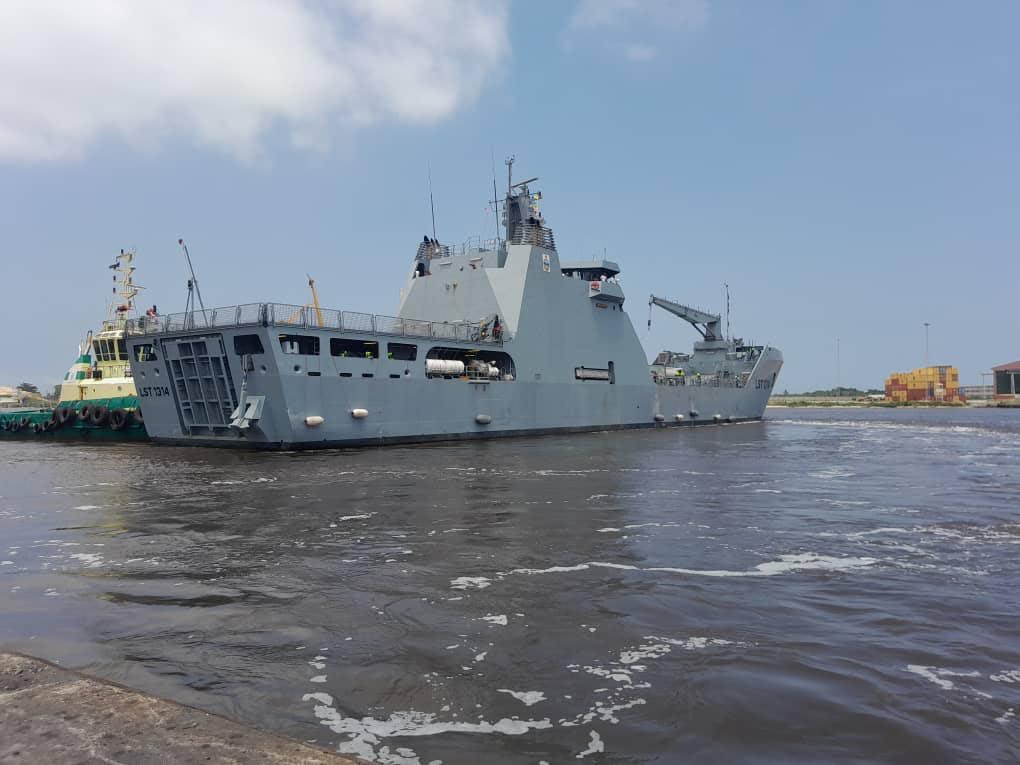 As part of Nigeria’s effort in strengthening and enhancing security in the West African Sub-region, the Nigerian Navy recently deployed Nigerian Navy Ship KADA to embark military wares and contingent to Guinea Bissau on ECOWAS Peace Keeping Operation and stabilisation of the nation. Chiemelie Ezeobi reports that this move has reinforced the navy’s formidable role as a regional war power

Over the years, Nigeria has played the big brother role to so many African nations, little wonder she is often referred to as the ‘Giant of Africa’. In military warfare, it is no different, as the country has continuously led and supported the continent in either its peace keeping role or warfare against external and internal forces.

Going by its  records in peace-keeping missions and other pro-democracy engagements across the world, the Nigerian military could be comfortably referred to as a formidable force.

For the Nigerian Navy (NN), its role extends beyond warfare to port calls, which are diplomatic in nature as it’s tilted towards forging and blending bi-lateral relations between nations.

Peacekeeper’s first role is to support governments to uphold their protection responsibilities through advice, technical and logistical support and capacity building.

Peacekeeping missions also seek, through political good offices and mediation, to take a preventive approach to protecting civilians. As a last resort, however, many peacekeepers are authorised to act to physically protect civilians.

Mandate for Protection of Civilians

Given the mandate given to the peace keepers by the United Nations, they are

are mandated to protect civilians.

This is one of the continuous advocacy championed by the Civil Society Legislative Advocacy (CISLAC).

This mandate include protecting children and protecting against conflict-related sexual violence. Essentially, they are  mandated to prioritise the protection of civilians.

Given the upheaval in Guinea Bissau after the President of Guinea Bissau, President Umaro Sisoco  Embalo escaped a coup attempt in February 2022, the Economic West Africa (ECOWAS) set up the Security Stabilisation Mission in Guinea Bissau (ESSMGB) with one-year renewable mandate to stabilise the country.

Troops of Nigeria, Senegal, Ghana and Ivory Coast make up the

ECOWAS Security Stabilisation Mission in Guinea Bissau and the respective nations have their contingent deployed to Guinea Bissau.

Essentially, the mandate of participating troops are three-pronged- ensure the protection of the government of Guinea-Bissau; assist the Armed Forces of Guinea-Bissau to stabilise the country, as well as protect civilians.

On NNS KADA were military wares and contingent, which was part of Nigeria’s effort in strengthening and enhancing security in the West African Sub-region.

The vessel which cast off Apapa in Lagos Saturday, conveyed the contingent and military hardware of different kinds

as part of the strategic sealift role of the Nigerian Navy.

Rear Admiral Yakubu Wambai while addressing the Ship’s Company onboard NNS KADA charged them to adhere to integrity, professionalism and teamwork in all ramifications during the mission.

He also used the opportunity to urge the officers and men to respect the religious and cultural sensitivity of the Host Nation while discharging their duties in line with utmost professionalism.

On his part, the Commanding Officer NNS KADA, Navy Captain Reginald Adoki, prior to the departure of the ship, showed appreciation to the Chief of the Naval Staff, Vice Admiral Awwal Zubairu Gambo, for his support and enabling ambiance for the Ship’s company to embark on the voyage in support of the mission.

Others were Commodores Bassey Duke, Gideon Kachim, Victor Choji and other Principal Staff Officers of the Headquarters Western Naval Command.

The Chief of the Naval Staff, Vice Admiral Awwal Zubairu Gambo, who was represented by the Flag Officer Commanding (FOC), Western Naval Command (WNC), Rear Admiral Yakubu Wambai, who was onboard NNS KADA before it cast off, reiterated that the history of peace keeping in Africa and beyond cannot be written without mentioning the commitment and sacrifices of Nigeria.

He said “Since independence in 1960, Nigeria’s commitment has grown to be widely recognised in the international community as an unrelenting advocate of global peace, hence it is crucial for her continual involvement in peace keeping missions in Africa and beyond.

“NNS KADA is therefore embarking on the voyage to deliver the outstanding logistics and stores of the NIGCON. By this effort, the capability of the new ship will be brought to bear in support of the ECOWAS mandate and in line with Nigeria’s Foreign Policy objective which focuses on Africa.”

Meanwhile, the decommissioned NNS AMBE and OFIOM (both Landing Ship Tanks) had played similar roles before and during the ECOMOG operations in the 1980s and 1990s.

Role of Navy in Peacekeeping Operations

On the role of the navy in any peace keeping operation Nigeria participates in, the FOC said the service plays general and specific roles.

Giving a breakdown of such roles, he said they include sea lifting of troops and logistics, Sea Surveillance, Blockade, Gun Fire Support, Control of Shipping and Sea Lane of Communication. Others are Search and Rescue Mission, policing, conveying of relief materials amongst others.

For NNS KADA, the voyage is her first national assignment since she arrived Nigeria from the United Arab Emirates on May 27, 2022.

NNS KADA, a 100-metre long roll-on-roll-off multipurpose vessel whose keel was laid in December 2019 at the Damen Shipyard in Sharjah, UAE, was launched 20 years after the navy decommissioned its last LST.

With a capacity to carry over 250 passengers including 32 crew members and 16 embarked Special Forces,  NNS KADA is currently the largest LST in the whole of Africa, which is designed for a range of duties including amphibious operations, strategic transport of equipment and troops, disaster relief, medical evacuation and humanitarian assistance.

It also has a helicopter deck and significant space to carry troops and tanks for ground forces on special mission.

As the vessel cast off, one thing was certain, the NN had once again shown it was a naval force worthy of reckoning, not just in Africa but beyond the Gulf of Guinea waters.

Little wonder the huge responsibility both the regional navies and international partners often place on the service during each operation or exercise.

The Nigerian Navy has once again shown it is a naval force worthy of reckoning, not just in Africa but beyond the Gulf of Guinea waters. Little wonder the huge responsibility both the regional navies and international partners often place on the service during each operation or exercise