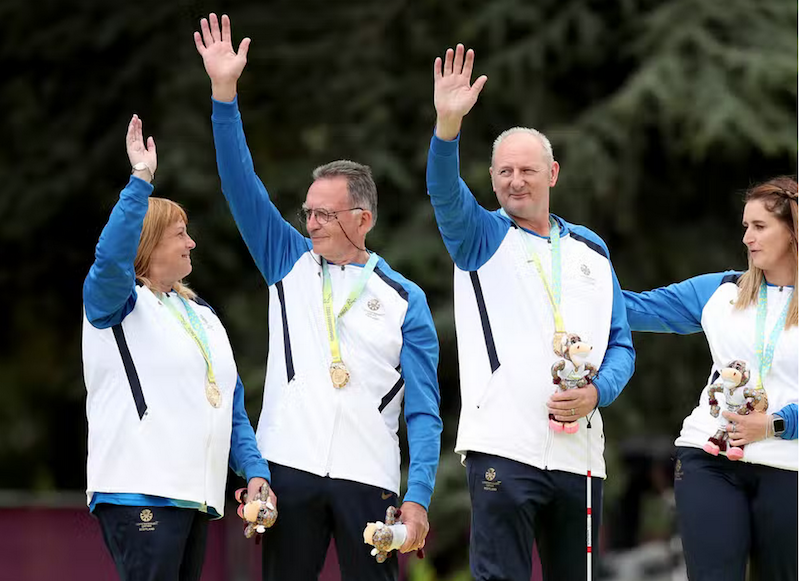 Miller is director for visually impaired bowler Melanie Innes who, along with Robert Barr and his director Sarah Jane Ewing, beat Wales 16-9.

He takes over as oldest medallist from compatriot Rosemary Lenton, 72, who won the Para women’s pairs on Wednesday.

In the women’s triples final, England beat Malaysia 17-9 in an exciting contest at Victoria Park.

Northern Ireland sealed their best-ever Games medal haul after the men’s fours beat Wales 17-10 in the semi-finals to set up a final meeting with India.

After achieving his new Commonwealth accolade, Miller told BBC Sport he thought Lenton would be “quite pleased”.

He added: “A year ago I never dreamed of being here. I got a phone call, and nearly fell off my chair to be honest. Here we are – where are we going to go from here?!

“Bowls is easier for older people – but any sport… walking football, rugby, you name it. Get out there and exercise, play games, compete. It’s brilliant whatever age you are.”

Welshman Gordon Llewellyn – who is also 75 but five months younger than Miller – had to settle for silver along with partner Julie Thomas.

Miller, who was born in November 1946, had already broken the record for the oldest Scot to compete at the Commonwealths.

Llewellyn was born in April 1947. He and his director John Wilson played with Thomas and her director Mark Adams.

Directors were awarded medals for the first time on the Gold Coast four years ago. Prior to that only the bowlers themselves were awarded them.