Super Falcons Beg Pinnick Not to Abandon Nigerian Football Yet 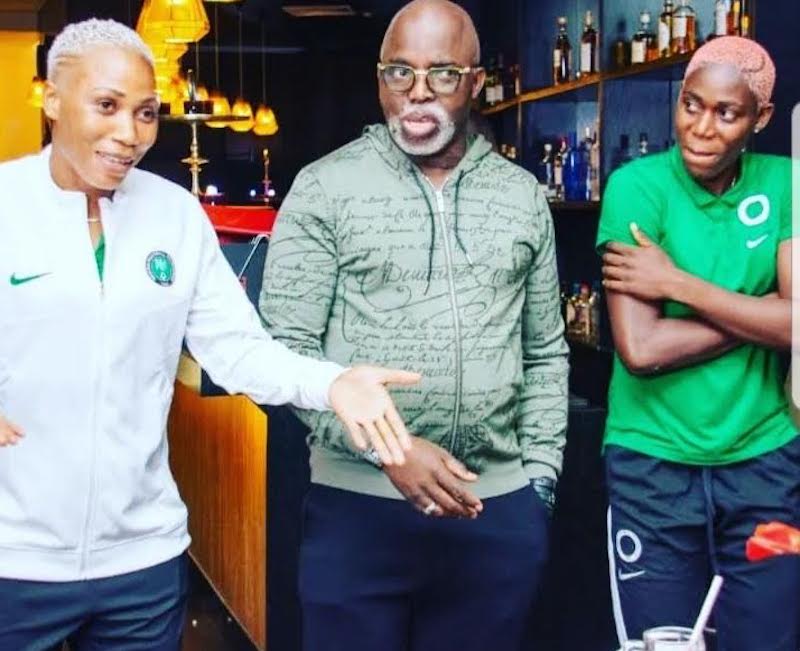 Super Falcons who are chasing Nigeria’s 10th continental title at the 12th Women’s Africa Cup of Nations (WAFCON)  in Morocco are rooting for Amaju Melvin Pinnick to continue in office  as President of the Nigeria Football Federation (NFF) beyond September 2022.

The Elective Congress of the NFF is scheduled to hold in September where a new helmsman is expected to emerge to lead the country’s football for another four years.

Pinnick who also doubles as both CAF and FIFA Council member is believed to be seeking to continue in office to see through most of the reforms he has in works despite initially agreeing to step down after his second term.

At the send forth dinner organised for the Falcons at Eko Hotel and Suites in Lagos on Sunday night, members of the senior national women’s team were unanimous in asking Pinnick to continue on the job due to the great transformation he has brought to bear in the team.

In an exclusive interview with ARISE TV Sports to be broadcast this weekend, Super Falcons Captain, Onome Ebi and Barcelona Femeni forward, Asisat Oshoala pleaded with Pinnick to continue in office as President of NFF.

First to speak was Oshoala. “ President (Pinnick) has done so much for us as a team if we really want to be honest with ourselves,” began the Barca star. “ I remember when I was at Arsenal Ladies a couple of years ago, my teammates were always going home for international friendlies whenever there were FIFA windows. But I was always staying back, training alone because there was nothing back home. It is no longer so and we don’t want this new development to stop for Falcons players to go back to starting line again. I think we are following through the right path and really want this continue,” observed the multiple times African Player of the Year.

Similarly speaking, Ebi begged Pinnick not to leave the team now. “We want to beg you not to leave us now because if you leave us, we are going to start all over again like my teammate (Oshoala) has spoken. We want you to think about this  and how your continued stay will help the team.”

Chairperson of the Nigerian Women’s Premier League who also doubles as the Chef de Mission of Falcons to Morocco 2022, Aisha Falode, described Pinnick as father figure to the team and that the players have enjoyed the relationship.

“This team (Super Falcons) is your baby. You have pampered them (players)  like your babies. When there are problems, you solved the problems for them. That is true hallmark of leadership.”

Falode insisted she did not understand why Pinnick will decide to abandon the team now when he’s needed most now. “I don’t know why you are insisting you don’t want to contest at the next election when you are needed most now for the national teams and the country to benefit from your vantage position in CAF and FIFA now.”

“It was not your making that Super Eagles didn’t qualify for the World Cup in Qatar. The players really wanted to go to the World Cup. But football as we know it is anybody’s game. There is no point now crying over what has happened. Better days are ahead for Nigerian football,” concludes Falode, a respected voice on the game in the continent.

The Super Falcons are in Morocco for the Women AFCON with supreme confidence, having beaten Ghana and Côte d’Ivoire in qualifying series, and holding Canada to a draw during their two-match tour in April.

There has however been a remarkable turnaround for the different national teams since Eagles failed to get the ticket to Qatar 2022 .

Super Eagles have won their opening two games in the qualifiers for the 2023 AFCON against Sierra Leone and São Tomé and Principe.

The Flying Eagles and Golden Eaglets emerged champions at the WAFU B U-20 and U-17 Championship respectively. The Flamingos have also qualified for the FIFA U-17 Women’s World Cup.

The Super Falconets bulldozed their way through the African qualifying series and are already getting set to dazzle the world at the FIFA U20 Women’s World Cup in Costa Rica.

The Flamingos also decimated African position and will participate in the 7th FIFA U17 Women’s World Cup in India later this year.