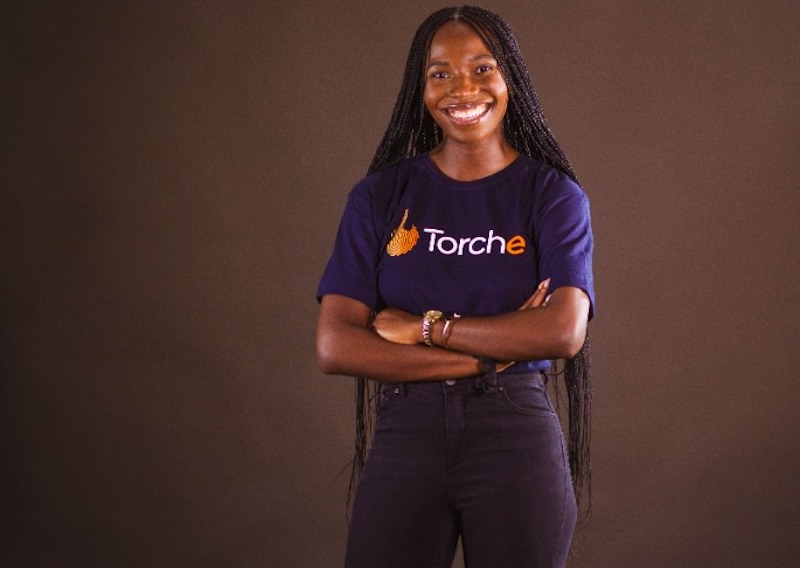 Out of the millions of banked Nigerians, only 8% use debit cards while the rest are averse to this technology due to high POS failure rates, delayed settlement periods, card fraud, low literacy levels, etc. Cash is still king as globally 4B people remain unbanked or underbanked. These people miss out on the benefits of making digital payments and building spending history to get access to credit.

Now, imagine not worrying about this as you can pay for groceries, lunch, fuel, etc with just your face, fingerprint, or palm. The past years have seen Africa embrace new ways to better their payment experience across the board and Nigerian-based startup Torche is answering to this development with its biometric-enabled solution. Led by CEO Sisan Dorsu, Torche is giving the average African an opportunity for growth and financial inclusivity, as long as they can be identified.

“The mission is to see a society where everyone is able to pay as themselves,” she says, “not everyone has a card, bank account, or high literacy levels but they do have faces, fingerprints, and palms.” Before moving to the United States at age 7, Sisan was tuned in to the harsh realities of people around her as she vividly recalls “going to school and seeing children hawk instead of also going to school at that time of the day”.

This would catalyze an unease that has followed her everywhere to dream up “building an Africa where all children have access to systems that allow them to not just live and survive, but to also be able to dream and achieve their full potential”. As an adult, her motivation had extended towards “worrying about what Africa will be like in the next decade if the downstream and unbanked population are never given access to financial services”.

Another lightbulb moment that would crystallise Sisan’s penchant for creating solutions for Africa could be traced back to an encounter with the former first lady of the US, Michelle Obama in 2009, following a visit to the Children’s National in Washington D.C where Sisan battled kidney failure. “I watched carefully as she signed my pillow – ‘Dream Big Dreams’,” she muses, “since that day, I’ve always reflected on how my fate of recovering might not have been so lucky if I was treated within our broken health systems back in Nigeria.”

This would spur Sisan’s engrossment in Pan-African initiatives from high school to this moment where she’s taking the reins to champion Africa’s first biometric-enabled payment solution, “I think when you overlook a massive population, instead of digging deeper into building solutions for their problems, we won’t be able to uncover many situations that will also be applicable to the rest of the world.” In 2021, Sisan was inducted into the 14th class of the Harambe Entrepreneur Alliance, a group of young African entrepreneurs who have made a promise to build and unleash the immersive potential of African people. “African entrepreneurs must continue to come together as we recognize that we cannot achieve African prosperity without working as one,” she says.

She becomes the youngest female founder inducted to the alliance and joins a handful of Nigerian Harambeans like Iyinoluwa Aboyeji (Andela, Flutterwave) and Adetayo Bamiduro (MAX.ng). While Nigeria’s tech startup ecosystem is awash with visionaries who’ve dreamed up and created world-class solutions that are impacting the lives of many, female founders consist of only a small fraction. Sisan joins the growing number of women taking the helm in Nigeria’s burgeoning tech scene, as she ushers Africa into an era of cardless payment. She is audibly intentional about journeying this course alongside other women.

“It’s my priority to have strong female talents on this journey,” she says, welcoming Tomi Omowole, who will wield her 9-year stint to lead marketing efforts at Torche. Being in the driver’s seat for an uncharted product, in a male-dominated industry and largely patriarchal society, is no walk in the park, and Sisan has admittedly been “scared some moments than others”. “How many black female-led fintech startups have attempted to build proprietary biometric payment technology?” she quizzes but however maintains that “building for the everyday African who goes to sleep and wakes up thinking about how to survive despite their fears” is enough to keep her going.

In April, Torche was enlisted as part of the Techstars NYC Spring 2022 cohort, where the founding team spends the intensive 12-week program working alongside other entrepreneurs, mentors, and coaches to strengthen their business. They’ll also join an ever-growing Techstars network of global founders, leaders, and investors. This is not just a feather in the cap for Sisan and her co-founders Gbenga Oni and Fawaz Abaniwonda, it also bolsters Torche’s long game of edging the present POS technology.

“I learnt that good survivors aren’t immune to fear; do they move forward or do they freeze? What matters is what they do next,” Sisan recounts applying and not making even the first stage last year. Being the co-founder and Chief Executive Officer of Torche, Sisan is only an inch into building the Africa of her dreams, starting with biometrics as she promises to “keep going to sleep every night and waking up every day thinking about how we continue to move forward towards achieving our vision of financial access and industry for every African on the continent.”