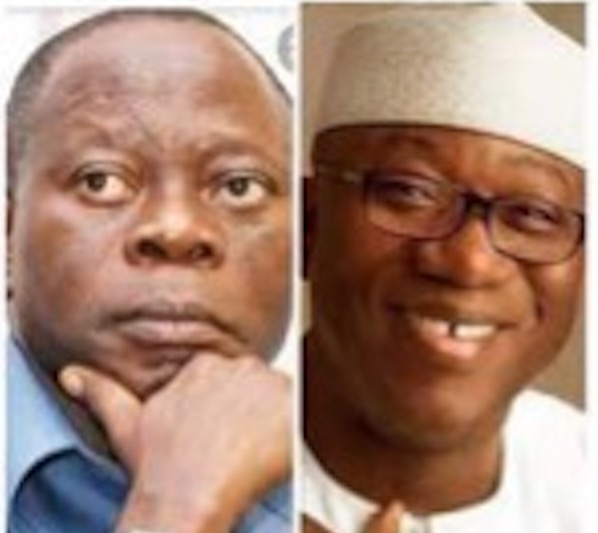 Faced with this headline, smart and informed readers ought to immediately mumble to themselves, “So, that’s why they classed! It is a thing of corporate interest, after all, nothing personal.”

What these individuals would be noting to themselves is the reason Ekiti State Governor Kayode Fayemi and former All Progressives Congress (APC) National Chairman, Adams Oshiomhole seem intent on rubbishing themselves before all and sundry. If it is all for the presidential election of 2023, then none of these squabbles is new to the block.

Many things are happening over at the national APC camp. The most recent of these happenings is the figurative slug of mud that Oshiomhole threw at the face of Fayemi by telling everybody that Fayemi once begged him to rig an election as a favour to him (Fayemi). This allegation, like a bombshell, has thrown many things out of order within the party, jamming the otherwise smooth narrative that the party’s publicity personnel have been peddling.

Oshiomhole’s allegation that Fayemi asked him to rig the 2018 primaries for the benefit of Fayemi’s people has been well received by Nigerians. You will find people at newspaper stands nodding their heads as they claim that this is not surprising since it is expected of National party Chairpersons to be partial to their own people.

Fayemi, naturally, is not at ease with Oshiomhole’s allegation. In response, people from his camp stated categorically that Oshiomhole is off his rocker and is only spinning tales that have long lost touch with history and reality.

In truth, it is all a matter of perspective and choice. People in the know are claiming that Oshiomhole’s allegations against Fayemi have to do with the fact that Fayemi is intent on becoming president even though his senior associate (some would say his benefactor), Asiwaju Bola Ahmed Tinubu, is also running for the position. Thus, Oshiomhole is taking sides with Tinubu and using this as an opportunity to undermine Fayemi’s aspiration—or so political analysts claim.

Regardless, it is a fact now that Oshiomhole and Fayemi are not seeing eye-to-eye on this election rigging matter. Maybe a few closed-door meetings will calm the issue and repair the tears in their relationship.