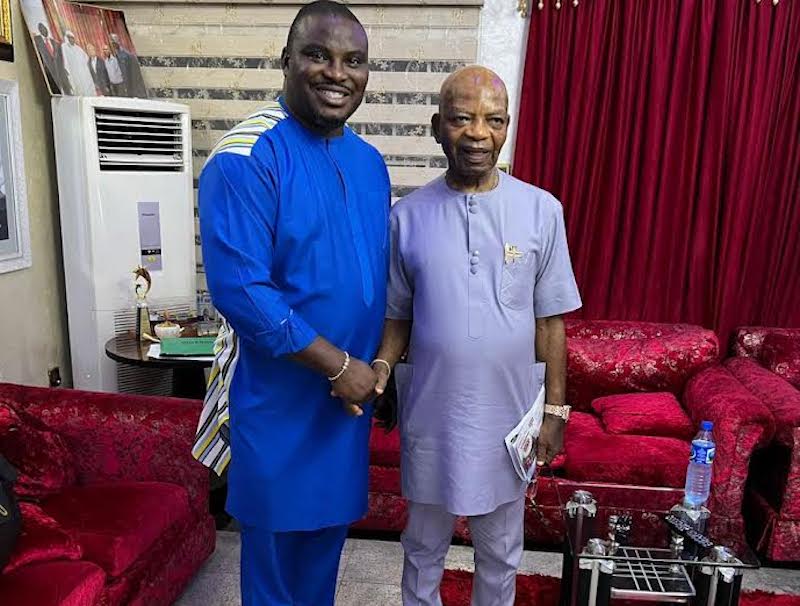 Mayor Lucky Igbokwe is a United Nations Mayor for Peace and Founder, Don Lulu Foundation. The Abia-born entrepreneur and entertainment icon, who is popularly known as Don Lulu, recently threw his hat in the ring to run for governorship on the platform of the Peoples Democratic Party to holistically reposition the state for economic prosperity by creating the enabling environment for industries to thrive. Other thematic areas that he intends to revive include l education, technology, security, tourism, transportation and agricultural sectors. Pledging to ensure a thriving creative industry, while empowering women and youths, Igbokwe also intends to escalate the commercial viability of Abia markets to unprecedented new levels, as well  enhance the road networks, which all put together will make sure Abia occupies its rightful position in the comity of states. Recently, his governorship ambition received a big boost following a high profile endorsement by the Ozoigbondu of Igboland, Prince Arthur Eze, writes Emmanuel Ugwu-Nwogo

All eyes are on Abia as preparations for party primaries nears feverish pitch. Both indigenes and residents of Abia as well outsiders are looking forward to the emergence of a person who would get the state on the right traction after long years of inertia.

In fact, everyone knows that things are not working well in God’s Own State hence the expectation that change would come with the 2023 governorship election.

Among Abians who are very much concerned that the state is not doing fine and needs a radical push to start accelerated development is Mayor Lucky Igbokwe, the Abia-born entrepreneur and entertainment icon, popularly known as Don Lulu.

He is among the governorship aspirants gunning for the ticket of the ruling Peoples Democratic Party (PDP). His ambition to preside over the affairs of Abia received a big boost recently with the support and backing of oil mogul and renowned philanthropist, Prince Arthur Eze. This has been described by analysts as the game-changer given Eze’s record of successfully making kings out of most aspirants or candidates that got his endorsement at every election cycle.

Prince Eze holds the title of Ozoigbondu of Igboland which was bestowed on him by Igbo traditional rulers in recognition of his numerous philanthropic activities within and outside the South-east region.

He has not only endorsed Igbokwe’s governorship ambition but specifically sent him on a mission. He charged him “to go and clean up governance in Abia”. Like many others, Eze is unhappy that Abia has suffered from long years of decay and leadership failure.

He believes that Igbokwe, who has emerged as a frontline governorship aspirant of PDP has the capacity and well defined goal to effectively clean up the mess in Abia.

The Atlas Oranto Petroleum boss bared his mind on Abia’s bad condition when Igbokwe paid him a courtesy visit at his Abuja residence. He expressed his displeasure at the deplorable condition of infrastructure in Abia and called for a leadership change.

He urged the Abia governorship hopeful to use his exposure and age advantage to rewrite the history of the state and make it the pride of Abians and the South-east zone in general.

Not only that, the 2018 Zik Leadership Awards winner in the business category, promised to give Igbokwe all the necessary support to enable him succeed in his quest to better the lots of Abia people who have suffered long period of neglect in the hands of successive administrations in the state.

He said he was excited and happy to see a prosperous young man like Mayor Igbokwe take up the challenge of the leadership question in Abia State, saying that he (Mayor Igbokwe) stands a better chance to clinch the seat while urging him not to relent in his efforts to pick the PDP governorship ticket.

Eze praised the exploits of the late Dr. Michael I. Okpara in the Eastern region and hoped that another Ohuhu-born leader in the person of Mayor Igbokwe would reinvent the Okpara years in Abia when elected governor. He told the young governorship aspirant to push ahead in his mission, pledging that he would support him to emerge victorious at the poll.

The famous Anambra businessman has been a strong pillar of support not only to the PDP, but to other parties and politicians as well. In the South-east political economy, he is a powerful force to reckon with and highly sought after by both investors and politicians alike.

In his response, the PDP governorship aspirant thanked Prince Eze for the warm reception, and promised not to disappoint him and others who are hopeful that his decision to join the gubernatorial race would bring about the much-desired turnaround in the fortunes of Abia State in 2023.

The United Nations Mayor for Peace and Founder, Don Lulu Foundation stated that he came to solicit for the support of the Ozoigbondu in his desire to become the next governor of Abia. He said his decision to offer himself to serve Abia was informed purely by altruism and concern about the development of the state.

While promising to deliver, Igbokwe expressed genuine concern as a youth who has been involved in many youth development initiatives and cares about their future, pointing out that he has come to redeem the state and make sure workers salaries, pensions and gratuities are made priority.

Igbokwe means business. He has already  put his hands on the ploughshares and there’s no going back  At his official declaration on May 10, 2022 held at the PDP secretariat in Umuahia, a mammoth crowd was there to attest to his popularity, which is still growing.

In his address titled ‘My Decision To Join The Abia Governorship Race’, Igbokwe expressed his zeal to get his dear state on its feet.

He said: “My decision to run is borne out of hunger and desire to add value and impetus against the backdrop of the yearnings of the entire people of Abia State, who believe in the youths as an option and to take Abia to the much desired place occasioned by their cries and wishes for good governance, inclusiveness and ensuring that Abia takes its rightful place in the comity of states.”

He said that he has answered “the calls from stakeholders, including the downtrodden, traditional rulers and eminent sons and daughters of Abia State, and (decided) to take up the gauntlet, to stand in the gap to shield our people from any form of hopelessness.”

The high-riding entrepreneur pledged to run a people-centred administration that would create wealth,  bring prosperity to the masses and put smiles on the faces of distraught Abians.

“My team and I are ready to turn around the fortunes of the state by revolutionising all the sectors of governance with focus on the masses. If given the PDP ticket and elected governor, I will reposition Abia for economic prosperity by creating the enabling environment for industries to thrive, with a better approach to internally generated revenue that would reduce dependence on federation allocations.

“Education will be one of the major objectives of my aspiration, the sector will be reformed to include not only building of schools, but also the provision of incentives to teachers.We’ll revisit the farm settlements, improve and empower the youth in particular and our people in general, through agriculture, the creative industries will receive massive boost under our watch.”

He promised to exploit to the fullest all the inherent economic potentials of Abia, saying, “Tourism will be made more attractive and visitors will come to experience our beautiful cultural heritage and sites.

“We’ll escalate the commercial viability of our markets to unprecedented new levels with improved infrastructure and security. Abia will become the ICT hub in West Africa during our tenure.

“We shall enhance the road networks and improve transportation. We are very committed with passion to make sure that Abia occupies its rightful position in the comity of states in the country.

“We are determined to replicate in Abia State the record of achievements of our hero, late premier, Dr. M.I. Okpara in the defunct South Eastern region of Nigeria. We plan to explore all the areas of possible economic prosperity and development without exploiting the people. God’s Own State, Abia, is blessed with abundant natural and human resources,” Igbokwe added.

Igbokwe who is determined to lift Abia out of infrastructural decay and hopelessness, acknowledged that Abia has not been getting it right bearing due to absence of visionary leadership.

“What we need is the right leadership, a candidate with good character, great antecedents and who is popular, if PDP needs to put its best forward for the poll and if it is serious to retain the seat in Abia.

“I, Mayor Lucky Igbokwe is the right person and the best hand for the job. I have consistently proven that with my track record in philanthropy, business and human capacity development. My footprints are everywhere in the state despite coming from Abia Central. I urge you all to come to the table and let’s take Abia to the most enviable heights we desire. I pledge that nothing short of this will happen. I want us to know that the confidence in me is a confidence of hope, the future, the success, the restoration and the freedom from fear.”

Igbokwe has not left anyone in doubt about his readiness for the contest having consulted widely and visited all the local government areas of Abia State to engage with the delegates and stakeholders ahead of the party primaries.

His candidature has received wide acceptability especially among the youths, women and grassroots, who have identified with his aspiration and also among the elderly men and women who believe he represents fresh hope. They asked him to come and rescue Abia.