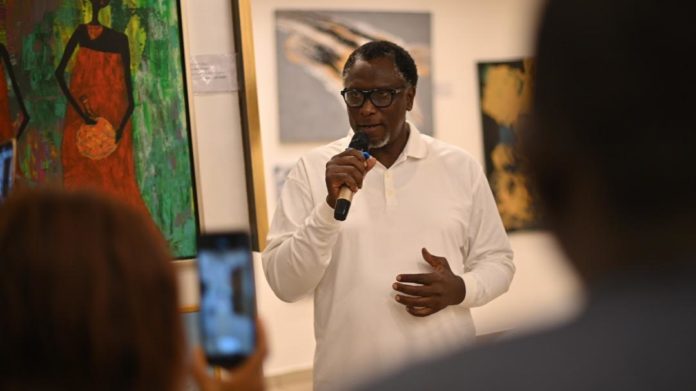 The exhibition aimed to spur and motivate young Nigerians to rise courageously like the lions of old, who fought to take Nigeria into independence.

Running from April 10 to 18, the event was home to art lovers, curators, and collectors of different nationalities. It started with the exhibition of over 80 artworks that were not for sale. An array of activities marked the nine-day event, including an NFT art talk where artists and art enthusiasts learnt about the new wave of blockchain technology sweeping the art space. Other events included an art workshop for kids as well as the creation of a painting titled ‘The Lion Of Courage.’

During his speech, Olotu unveiled the Excel Signature Creative Hub, which according to him started in 2019, and is now built into a haven for those interested in fine arts, digital arts, sculpturing, metal art, wood art, interior design, product design, cinematography, music and lots more.

According to Olotu, he is ready to let the public see a side of him that has never before been revealed.

“My art is my vulnerability, my offering, my protest, and my pain. It’s like peeling away the layers of my personality and seeing into my soul. I had to be ready and I am ready.”

Continuing, Olotu said, for long, he withheld exhibiting his works, as a tool to communicate his sadness at the state of the country.

True to his new conviction, the artist who hails from the Niger Delta region, said he exhibited some of his works for the first time, at the World Art Exhibition in Dubai last month, and received overwhelming

In his plans for the future, Olotu unveiled his reality TV show called ‘The Art Maestro of the Year’, scheduled for the second half of the year.