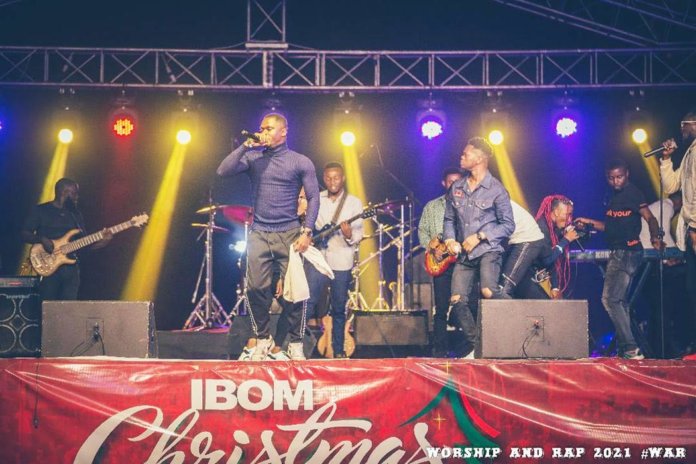 The rapper/songwriter, had recently dropped a 5-track Extended Play (EP) – ‘Take Over’ – took the option of launching the project, which many see as an investment in budding talents in the state, in other parts of the region. According to Uduak Umo of Jabborro Public Relations, managers of the Sir Vic brand and projects, “ He had the option of launching the project anywhere else and could easily afford to do so.”

The decision to start in Akwa Ibom State was based on the artiste’s belief in the people of the State. Umo explained: “Sir Vic, who is a native, has always believed that there is significant talent for entertainment projects in Akwa Ibom. This is why we only brought in five individuals from outside the State for this project, and they were guests.

“The actual session men and workers were sourced locally. Subsequent editions of the WAR Concert project are slated for Lagos, Abuja, Port Harcourt and the UK, according to the organizers. The plan is to retain most of the Akwa Ibom guys that worked with us everywhere we go.”

Affirming the assertion, Sir Vic stated that “I am not just a singer; I’m also a business man. I’ve managed talent in the past elsewhere. And I observed that Akwa Ibom people are both enterprising and really talented. This is the reason investing in the people and the economic environment is worthwhile for me. I’m aware of other factors that matter, but to me, the people are the most critical.”

The Uyo leg of the project involved a concert in the city centre, Ibom Plaza, followed by an album listening party held before more than 15,000 guests from within the State Government’s Christmas Village festival in December. The WAR Concert was one of the annual 30-day yuletide fiesta’s best ever event, with the support of Members of the Akwa Ibom State Government’s Christmas Village organizing committee.

In the course of the WAR Concert project, school fees were paid for 8 University students, 20 small businesses were directly funded, and 65 Uyo-based professionals were hired in what was a combination of business and charity.