The Shangiha Landlords Association, has reacted to the planned probe of the Attorney General and Minister of Justice, Abubakar Malami, (SAN), and the Inspector-General of Police, Usman Baba Alkali in the execution of the court judgment at Magodo Estate in Lagos State, described it as a needless witchhunt.

According to a statement yesterday by the Counsel, Shangisha Landlords Association, Deji Fasusi, the call for probe was the handiwork of two members of the House of Representatives from Lagos State, who were either acting on behalf of themselves or in connivance with some disgruntled members of their association.

The association, therefore, said, “This attempt at a needless probe is nothing but a witch-hunt and it is a legislative over-reach in all the circumstances.
“The Judgment-creditors (Shangisha Landlords Association) are certainly not surprised that the motion seeking to probe the Attorney-General of the Federation and the Inspector-General of Police were moved by two (2) members of the House of Representatives representing Kosofe: Ademorin Kuye and Rotimi Agunsoye.

“The duo are illegal occupants on portions, part and/or plot within the Magodo Shangisha GRA Phase 2, Lagos, which by virtue of the Judgment of the Supreme Court, ought to belong to the Judgment-creditors. They are beneficiaries of an illegality, who have now decided to use the positions they occupy to subvert the cause of justice.”
According to the statement, it is interesting that the duo under the guise of “motion of urgent importance” moved the House of Representatives to investigate the invasion of Magodo GRA Phase 2 by Nigerian Police under the direction of Inspector-General of Police and the Attorney-General of the Federation.
“Nothing could be more ridiculous and laughable. These duo swore to uphold the Constitution of the Federal Republic of Nigeria and by so doing, observe and ensure that they do not use their position to conflict with their personal issues.
“The association said they never bothered to move the house to investigate why the Lagos State Government and/or its officials never complied with the decision of the Supreme Court since 2012 or why they never adhered nor complied with the order of interlocutory injunction restraining them from allocating or dealing in the land the subject matter of the suit while it was before the court, all the way from the High court to the Supreme Court.
“Perhaps the general public should be interested in why Mr. Ademorin Kuye, one of the sponsors of this purported ‘motion of urgent importance’ is being sued before an Ikeja High Court in Lagos in Suit Number ID/408LMW/2015; between OLUSEGUN OLAGUNDOYE V. ADEMORIN KUYE for unlawful and illegal demolition of a house in Magodo in the same Kosofe Local Government Area, where he is now playing to the gallery and seeking unwarranted and unsolicited attention.
“Whilst there are glaringly obvious burning issues of ‘urgent national importance’, which require speedy attention and which we believe would be worth the time of the House of Representatives to deal with as they form the core of our democratic ideals, it is befuddling that our esteemed Honorables prefer to score cheap political points by attempting to play the ostrich.
“They are merely grandstanding and we would not be surprised that this latest diatribe and attempted probe is sponsored by the very people, who have made the execution of the judgment impossible until now that their evil intentions aimed at frustrating the enjoyment of the fruits of the judgment has been exposed to the general public.
“The association said they have subjected the Judgment of the Supreme Court to their own interpretation and that, according to them, ‘the declaratory judgment of the Supreme Court only recognised the judgment creditors as being entitled to the allocation and re-allocation of 549 plots of land in Shangisha Village.
“They are supposed to be law-makers not law interpreters; a purview exclusively reserved for the courts, who have since decided with finality on the issue. In case they have forgotten, they need to be reminded that the law which they made, clearly empowered the Inspector-General of Police to obey lawful directives given by a minister.
“It is also necessary to refresh the memory of these law-makers to the effect that the Attorney-General of the Federation is the Chief Law Officer of the country, and rather than vilify, castigate and unduly criticise him, he ought to be commended for ensuring that the Rule of Law is maintained and the decision of the Supreme Court is enforced in any part of the country.” 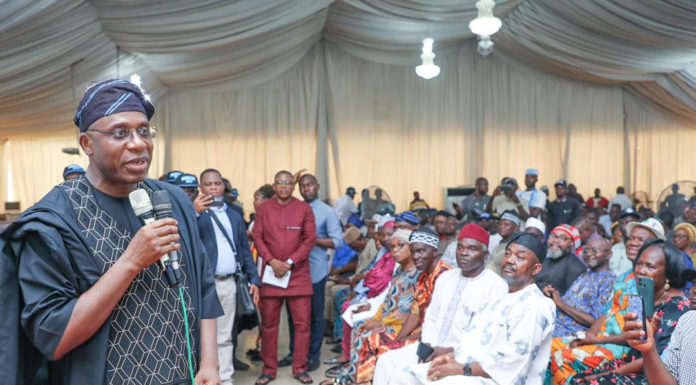