“Our investment in amateur sports is beginning to reap fruits—Dare” (THE NATION SPORT, December 28) I can stake my employment that this couldn’t have come from my super-active and cerebral minister.

“…Chief Olusegun Osoba, in response to a question, has (had) jokingly….”

“In place of the temporary and barely perceptible relief offered by stray sand bags….” Be on the alert: ‘relief’ connotes temporariness. So, to write ‘temporary relief’ smacks of sub-literacy

“As it was remarked sometimes (sometime) ago…”

“Waking up in the morning of Wednesday, January 25, 2012, had not been too problematic for Hafiz Ringim, at least not in any way that the day had given him any hint of what the day had in stock (store) for him.”

“It is a make-belief story” Get it right: make-believe.

“The sweet look of the cards do (does) not give any inkling of a country….” A manifest case involving error of attraction

“Beside the African Union dastardly act which shocked and outraged the world.…” There is a world of difference between ‘beside’ and ‘besides’ (which applies here).

“In fact, a dangerous development such as cultism needs not to be (need not be) treated with a kid’s glove”. Get it right: kid gloves.

“The impression I was given was that IBB had morbid fear of the wild, wild west, and would never cross the River Niger again, talk less (let alone) coming to Lagos.

“Anything to create a reasonably safe distance between us and the governor’s siren was alright.” This way: all right, if you subscribe to formal (standard) English. ‘Alright’ is an unacceptable spelling in classical environments.

“…he has indeed made remarkable damages on earth with a little help from its inhabitant. ‘Damage’ is uncountable except in legal reparations.

“What this therefore calls for is (are) clear-cut criteria for determining who goes and who is retained at the end of the pruning exercise.” What is the function of ‘exercise’ here? And this: criterion (singular); criteria (plural). The same standard applies to summons (singular) and summonses (plural)

“If each civil servant had at least a two-bedroom house in Abuja, very few Nigerians could have raised any eyebrow on the furniture allowance for lawmakers as was done not too long ago.” Our mandate, their meal ticket: raise eyebrows (fixed expression). Once again, ignore some obsolete dictionaries that still endorse this and mislead some of my hypercritics!

“Lagos Chamber of Commerce President…receiving momemtos as….” Till eternity: mementos

“Merger of Japan’s three banks elicit (elicits) reactions” A recurring case of subject-verb disagreement. Proximity does not come in here.

“He is frank to the point of recklessness and does not bath (bat) an eyelid about sensibilities once he is convinced about what he is doing.”

“Both palatable and heart-rending news are (is) most often broken there.”

“Its police, too, began investigation culminating into (in) the arrest of some suspects….”

“We do not have to wait till these bloody miscreants would think of going for a minister of education or a very top government personnel (official)….” ‘Personnel’ is strictly for collective usage. For example: the Nigerian Police service personnel who mount roadblocks are corrupt and disobedient. Remember that past IGPs had ineffectively abolished checkpoints. This is hoping that in the future, an active Inspector-General of Police will succeed especially in those areas where his predecessors had bungled.

“Our politicians should realise that if they can hold the country into (to) ransom for their jumbo pay, then civil servants should not be blamed if they do same (the same).”

“Manchester City girds lions (loins) for Man U and stems-up for record” For sports journalists (who cherish language abuse): phrasal verbs do not admit hyphenation.

“…the paper’s new printing machines which had been lying at the ports for sometime (some time)….” If you must remain Nigeria’s largest daily sale, distinguish between ‘sometime’ and ‘some time’.

“In Nigeria, it was designed by the military dictators as bait to divert the attention of the people from the enormity of their loots.” No questions: ‘loot’ is non-count.

Focus on columns and magazines coming on soon. 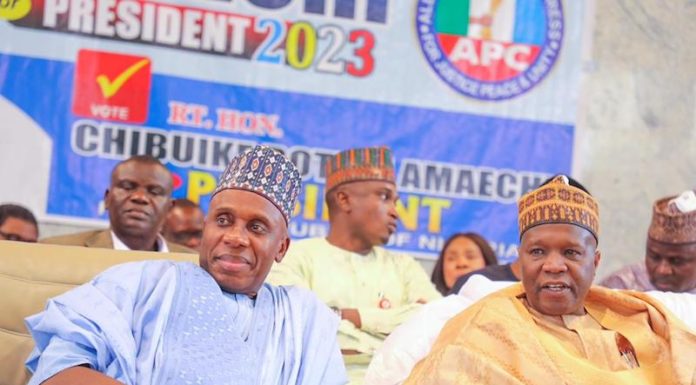