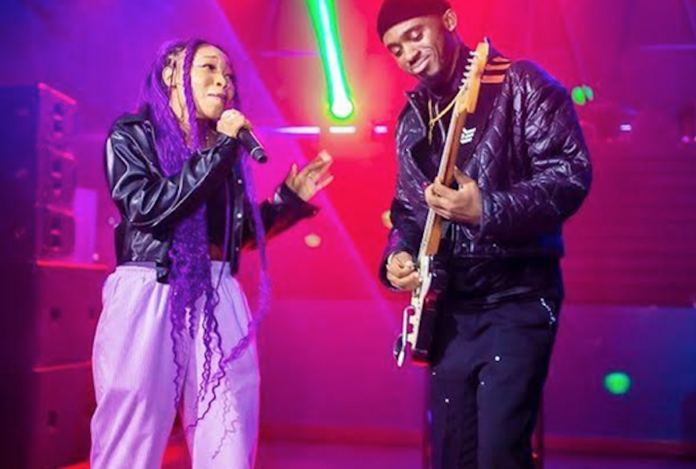 Ifiok Effanga, better known as Fiokee, presently Nigeria’s most prominent guitarist, is the man of the moment with ‘MAN’, his debut 14-track and 24 features album, writes Ferdinand Ekechukwu

As guitarist, Fiokeee – Ifiok Effanga – started playing 21 years ago. He learned to play guitar from a taxi driver for just two months and ended up teaching the taxi driver after one year. That’s how exceptional Fiokee is. This time, he returned with his smash debut album, MAN. When he announced the album, he wrote, “I am really excited and proud to be releasing my debut album titled ‘MAN’ on the 14th of January 2022. I need all your support for this, as we are about to achieve this huge milestone together!”

Milestone indeed with ‘MAN’, the 14-track and 24 features album, Fiokee sets himself up for constant evolution, upping the ante like like-minded greats such as the Malian Ali Faka Toure, the Congolese Franco, and even Nigeria’s King Sunny Ade. Graduating with a first degree in Mechanical Engineering from the Petroleum Institute of Engineering, Warri, Fiokee has remained a very calculative mind.

His rise-to-fame story, from 2008 Star Quest reality TV show which he won with his then group, Diamonds, down to setting up his record label in 2016, has been a narrative of intentionality and bravery. In the days leading to his debut album listening party, held at Bayroot Bar, Victoria Island, Fiokee turned 40. So in celebration of his propitious birthday, he decided to drop the all star-studded album.

“So, the idea behind the MAN album is I turned 40 on Monday (January 10, 2022)”, he told his guests, made up of select industry personalities. “So, I’m a full blown man (laughs). So, the reason why I said MAN to the album is because it’s symbolic of my new age and journey in the music industry since after winning the talent hunt competition sponsored by Nigerian Breweries. Then Star Quest was all about life-band performances.”

Fiokee played a year’s deal before being signed by Kennis Music in 2009. From there, he played for Dbanj in 2010 when he recorded Scapegoat. Moving on, he played with Davido on the song Gobe, and then also on the song Woju by Kizz Daniel. He also played on the album Joromi by Simi and a host of afrobeats hit songs. Continuing, the first afrobeats recording guitarist said: “So I just felt like I have supported afrobeats since 2010. Then I have grown in the industry, I have served. I was guitarist for Dbanj for four years before I joined Flavour in 2014 till date. Then I said ok what next. I mean everybody knows me as the first afrobeats recording guitarist, what next? Because I always believe it’s the next level. So I said let me start featuring these artistes and some of them actually came through.

“We did the song with Tiwa and Reekado Banks; so we took off from there. I started recording with Flavour, very connected with Flavour… then the latest one ‘Personal’ with Bella Shmurda. The idea about MAN is I’m grown up to be a full MAN. So I decide to title the album MAN. That’s why I said Fiokee is man today.”

The album which appears the first body of work in African music in 2022 sees Fiokee join talent manager, Osagie Osarenz as Artiste and Repertoire rep.

On this album, he stretches the storyline from his array of commercially successful singles, such as ‘Sweetest Thing’ featuring Ric Hassani, to ‘Like’ featuring Reekado Banks and Tiwa Savage, to ‘Dumebi’ featuring Davido and Peruzzi, reflecting the realities intertwined in adventure, treasure or love seekers.

From the first track of the album, one already envisions what to expect as the song ‘Good Time’ featuring the Puerto Rican brother duo, Jean and Alex, as well as Nigerian artiste T Classic, is one of the most enchanting project openers in recent times. The song sets the theme for some light-hearted vocal caressing and is followed immediately by the ‘Smooth Operator’ agenda, perfectly engineered by the Dutch singer, Nelson Freitas, as well as Nigerian sound-whiz Masterkraft.

The album soaks itself in the message, melody, and mood-lifting groove, as Fiokee forays beyond the realms of limitation on almost every song. With non-stop experimentation, he gets ‘Personal’ with Bella Shmurda on the acoustic Amapiano bop, igniting the vibe with his masterful riffs. He sojourns beyond Afro-Pop, Afro RnB, to the plains of Highlife where he taps the fraternal duo, the Cavemen, to serve a soulful bop dubbed, ‘Nne’

Fiokee’s mastery soars in his ability to make his basslines and outros stand out as mesmerizing mood-lifters; becoming so melodic that they even wrestle with the vocals from his collaborators for attention.