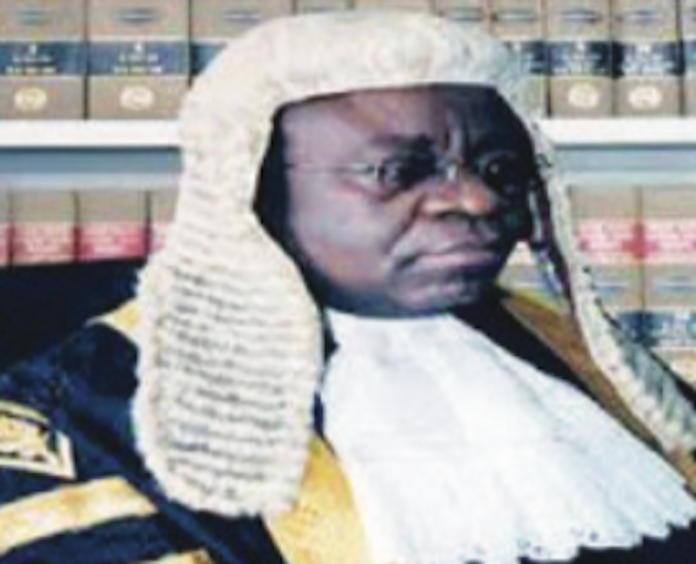 In the Supreme Court of Nigeria Holden at AbujaOn Friday, the 4th day of June, 2021 Before Their Lordships

On 14th September, 2000, late Chief Julius Abiodun Fasakin died and he was survived by the Appellants and the 1st Respondent (from different mothers). On 3rd November, 2000, the 2nd Respondent produced two Wills dated 30th April, 1999 and 1st March, 2000 respectively which had been lodged at the Probate Registry of High Court of Lagos State. Thereafter, the 2nd Respondent read the Will dated 1st March 2000 which revoked the Will dated 30th April, 1999, by operation of law.

After the reading of the Will dated 1st March, 2000, the 1st Respondent entered a caveat seeking to prohibit the grant of probate of the said Will. As Executors and Trustees of the Will, the Appellants filed a suit against the 1st Respondent seeking various declarative reliefs, which were granted by the trial court. In effect, the trial court held that the Will dated 1st March, 2000, was the authentic and last testament of the Late Chief Julius Abiodun Fasakin, and the Will dated 30th April, 1999 was revoked.

Aggrieved by this decision, the 1st Respondent appealed to the Court of Appeal, Lagos Division. The appellate court, in its judgement, set aside the decision of the trial court delivered on 19th January, 2005. The court further dismissed the Appellants’ claim contained in the Statement of Claim dated 22nd March, 2001, and declared that the Will dated 30th April, 1999 is the last and valid Will and Testament of the Late Chief Julius Abiodun Fasakin.

Aggrieved by the decision of the lower court, the Appellants filed a Notice of Appeal on 21st May, 2009 containing seven Grounds of Appeal. In reaction, the 1st Respondent filed a motion challenging the competence of grounds 1, 2, 3, 4, 5 and 7 of the Notice and Grounds of Appeal, and prayed the court to strike out the issues distilled from the said Grounds of Appeal for being incompetent.

The Apex Court determined first, the motion challenging the competence of some of the Grounds of Appeal, the effect of which rendered a sole issue for determination in the substantive appeal.

The issue for consideration in the interlocutory application was:

Whether Grounds 1, 2, 3, 4, 5 and 7 of the Appellants’ Notice of Appeal and the issues distilled therefrom, being grounds of facts or mixed law and facts and raised without obtaining leave of court as mandated under Section 233(3) of the Constitution of the Federal Republic of Nigeria, 1999, are not invalid and liable to be struck out.

In the substantive appeal, the following sole issue was considered by the court:
Whether the Court of Appeal was right by jettisoning and disregarding the Appellants’ brief of argument, on the ground that same was obtuse.

The 1st Respondent filed a Motion on Notice challenging the competence of grounds 1, 2, 3 4, 5 and 7 of the Notice of Appeal, and praying the court to strike out the said grounds and issues distilled therein. The grouse of the application was premised on the fact that the said grounds were of facts or mixed law and facts, which were raised without obtaining the requisite leave of court as mandated under Section 233(3) of the 1999 Constitution, and as such, were invalid.

In response, counsel for the Appellants argued that the said Motion on Notice being a Preliminary Objection was incompetent, for failure on the part of the 1st Respondent to obtain leave of court before incorporating same into his Brief of Argument. Counsel relied on the authority of MAIYEGUN v THE GOVERNOR OF LAGOS STATE (2010) All FWLR (Pt. 542) 1704 at 1707, among others, in support of his position.

On the sole issue in the substantive appeal, counsel for the Appellants argued that the lower court did not examine their Brief of Argument, issues formulated as well as the real evidence before the trial court, as it only considered the issues formulated and argued by counsel for the 1st Respondent. He argued further that the lower court went on the path of technical justice as opposed to substantial justice, when it failed to consider their Brief of Argument no matter how badly written. He relied on the case of ETAJATA v OLOGBO (2007) All FWLR (Pt. 386) 584 (2007); 16 NWLR (Pt. 1061) 554 at 576. He submitted that the Court of Appeal did not consider the overall interest of justice, when it jettisoned the said Brief of Argument.

In reaction, counsel for the 1st Respondent submitted that the court is at liberty to adopt any of the issues formulated by either party, for the effective determination of the appeal. Further, the court is at liberty to reformulate issues itself based on the Grounds of Appeal, and not necessarily those formulated by parties. He relied on the case of STERLING CIVIL ENGINEERING (NIGERIA) LTD v YAHAYA (2005) 11 NWLR (Pt. 955) 204, in support of his argument. In a bid to demonstrate that the evidence of both parties were equally examined, counsel for the 1st Respondent highlighted instances where the lower court considered the submissions of counsel for the Appellants in the judgement delivered.

As it is the practice of the Apex Court, their Lordships considered first the Motion on Notice filed by the 1st Respondent, challenging the competence of some of the Grounds of Appeal. Deciding first on the submission of the Appellants that the challenge to the competence of the Grounds should have been by way of Preliminary Objection and that leave of court was required, the Supreme Court held that the Motion on Notice was proper and rightly filed. The law is trite that, where a Respondent complains of the competency of some Grounds of Appeal and there are other grounds which can sustain the appeal, the Respondent ought to file a Motion on Notice to strike out the incompetent grounds, and not a Preliminary Objection. A Preliminary Objection is required to be filed if the challenge is against the hearing of the entire appeal for being defective, and not against one or more grounds – ODUNUKWE v OFOMATA (2010) 18 NWLR (Pt. 1225) 405. The court held further that the said grounds, which were being challenged by the 1st Respondents, were grounds of facts or of mixed law and facts; thus, they were incompetent as the requisite leave of court (from either the Court of Appeal or Supreme Court) was not sought and obtained. Consequently, the Appellants’ issues 1-4 distilled from the said grounds, were also incompetent and invalid. The court relied on FALEYE v OTAPO (1987) 4 NWLR (Pt. 64) 186.

In its determination of the sole surviving issue, the court held that the main essence of formulating issues for determination is to enable parties narrow the real issues in controversy as stated in the Grounds of Appeal, for the purpose of accuracy, clarity and brevity. The court is not bound to determine the appeal on the issue or issues formulated by either of the parties, which it considers germane for the just and effectual determination of the appeal. The court may even prefer to re-formulate the issues to enable it determine the appeal, as long as it flows from the grounds on the notice of appeal filed – NWANA v FCDA & ORS (2004) 13 NWLR (Pt. 889).

Flowing from the above, their Lordships concluded that the lower court, adopting the issues as formulated by the 1st Respondent, (as same was more comprehensible) was not tantamount to jettisoning the Appellants’ Brief of Argument. The court also held that ETAJATA’S CASE (supra) relied on was an obiter dictum, and inapplicable in view of the facts and circumstances in the appeal.

E.U. Chinedum with Adekunle Olanipekun and Desmond Ejiofor for the Appellants.

O.O.N. Olabisi with E.T. Olatunji and John Ainetor for the 1st Respondent.