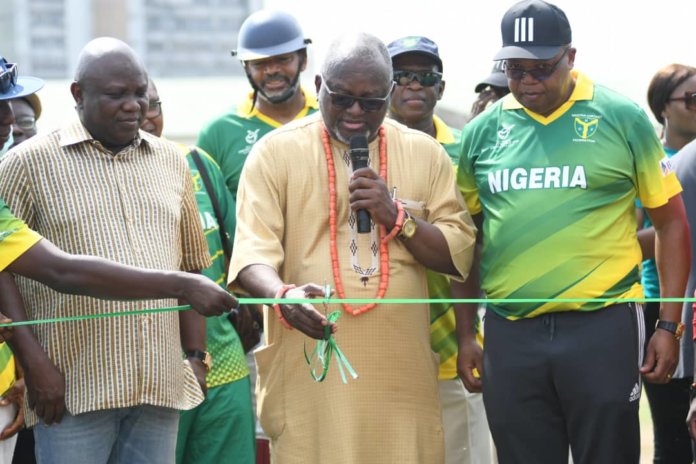 The TBS Oval, the nation’s traditional home of cricket has been shut for 18 months for upgrade from concrete bowling strips to grass turf which has been one of the challenges for the development of the sport in the country.

Professor Osato Giwa-Osagie, while commissioning the turf wickets, challenged cricketers and stakeholders to pull resources together to further the growth of the game in the country.

“I am glad at the level of development that this ground has undergone. This ground holds a lot of memories and mean much to the history of Nigeria and cricket.”

Also speaking, Governor Ambode said the game of cricket is capable of helping instil discipline and critical life skills in the youth.

“I think critical to success in any endeavor in life are the soft skills that the game of cricket teaches and we are very happy at the recent uptick in the development of the game. This turf wicket compliments all the effort of the administration in growing the game and I believe we would in no time feel its impact,” observed the former Lagos governor who is a cricket stakeholder having played the game at college level.

President of the Nigeria Cricket Federation (NCF), Uyi Akpata, stressed that the facility upgrade has helped increased the number of topflight cricket grounds in the country to seven in just one year that the NCF commenced the project.

“Facility upgrade scores very high on our agenda and the TBS is very critical in that sphere as it is Nigeria’s frontline facility.”

Akpata said that this easily puts Lagos on the map as city with two top facilities capable of hosting world-class events. He listed the other facility to include the University of Lagos cricket grounds in Akoka.

Two commemorative games were played at the launch of the event yesterday. The first was the game between a selected team of present and past national team players versus other elite cricketers in the country. The selected internationals won by 11 runs.

In the veterans’ game (Over 50’s)which featured a number of invited cricket stakeholders and ex internationals across the country saw the former president of the Federation, Kwesi Sagoe pit against the Kome Agodo’s side.

Across Nigeria, PDP Holds Primaries to Elect Governorship Candidates for 2023...

Across Nigeria, PDP Holds Primaries to Elect Governorship Candidates for 2023...