OMG the Musical: Spotlighting Inequality, Under-representation of Women in Leadership 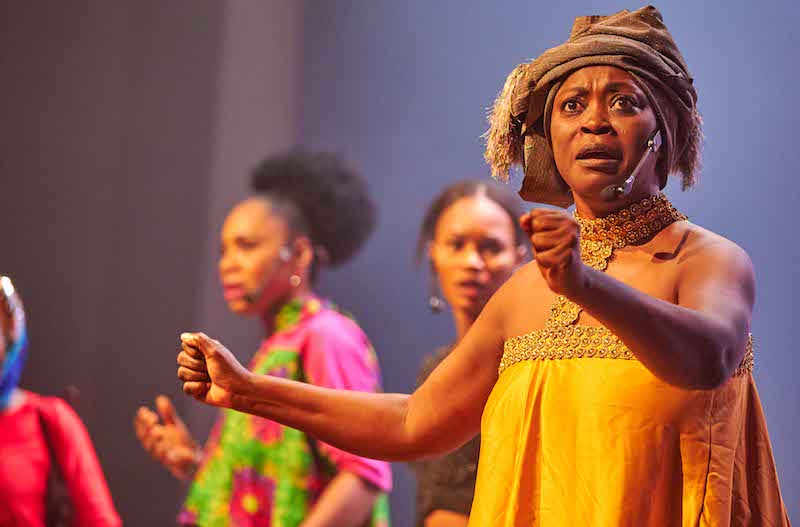 The title, “OMG the Musical” would elicit the image of a light-hearted rom-com or coming-of-age story, at best. The show, which was supported by the MTN Foundation, was staged at the Shell Hall, MUSON Centre which wore a bright new look with the enlarged photos of the cast and MTN themed-decor.

The musical is woven on the story of Gafuma, a competent and ambitious woman who works in a paramilitary organisation called the OMG – One Movement Group.

Disappointed, Gafuma confronts the former Commander-General on his decision. In a very typical misogynistic fashion, he admonishes her to be content with being second-in command.

Invariably, OMG in fact means “only men govern”. Gafuma accepts this for a while but her resolve to fight for the position is rekindled after she travels to the past and meets phenomenal women in Nigerian history who are known for their strong stance against the oppression of women – Olufunmilayo Ransome Kuti, Margaret Ekpo and Gambo Sawaba (OMG).

It was interesting to see how the themes of gender inequality and the underrepresentation of women in the workplace and the political space are stringed together in the play.

This is an age-long problem which, in many cases, cannot be attributed to the incompetence of women but the unwritten rules in society that leadership positions are primarily male.

According to a feature published by UN Women before the country’s 2019 elections, Nigeria was reported to have one of the lowest rates of female representation in the legislative arm across Africa. In global rankings, Nigeria ranks 181st out of 193 countries with a meagre 3.8 per cent women representation at the federal and state levels and only 16.2 per cent in appointive positions at the Federal Executive Council of Nigeria, despite constituting almost 50 per cent of the population.

While some argue that some progress has been made recently through the introduction of equitable policies requiring a quota of representation for women in politics and in the workplace, women are still usually either completely ignored, appointed as figure heads or like Gafuma, made to settle for second-in-command roles.

This is tokenism at its best, which gives an illusion of progress without addressing the cultural, systemic and societal issues that sustain the repression of women. OMG the Musical doesn’t do much to address the cause of the problem but encourages women to forge ahead and “take up space” in spite of it. It does this by alluding to the stories of the champions of women’s emancipation.

Even if the principle of equality fails, the social and economic benefits of increased participation and representation of women in work and political leadership positions make it an absolute necessity.

According to a McKinsey report, Nigeria’s gross domestic product (GDP) could grow by 23 per cent – or $229bn – by 2025 if women participated in the economy to the same extent as men. In effect, the future of the Nigerian economy lies largely in unlocking the untapped human resource potential of women.

The Producer, Ayo Ajayi, spoke on the challenges his production team faced and MTN’s role in helping them overcome, Ajayi said, “The process of bringing this musical to the stage was very challenging. The problem we have in this sector is finance…

“This production has actually brought together almost 100 youths from different fields – acting, dance, drama, light, designing, costume, amongst others. As such, without proper financing, things like this won’t happen. That’s why we really appreciate MTN for looking into this sector and they have been doing it consistently. Without organisations like MTN, this would not have happened.”

The Executive Secretary, MTN Foundation, Odunayo Sanya, voiced MTN’s support for important stories like OMG the Musical when she said, “At the MTN Foundation, we are committed to promoting stories that are capable of positively shaping society.

“We believe that stories with messages that advance efforts towards creating a more equal and safer world for all women are very important because beyond entertaining the audience, they spark conversations on this very important issue.”