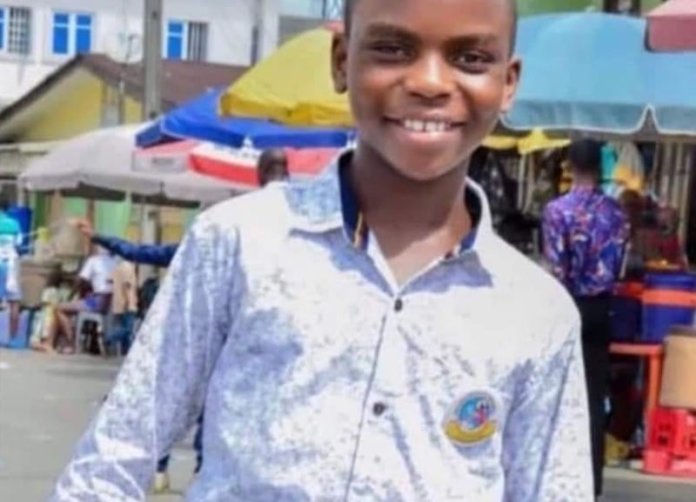 Five students of Dowen College in Lagos are currently in police custody for the alleged assault and brutality meted out to 12-year-old Sylvester Oromoni, which led to his death. Also in the police custody are three housemasters of the school.

Although the deceased had mentioned five students, only three were initially brought by their parents and lawyers. However, the reaming were later brought to the State Criminal and Investigation Department (SCID), Panti, Yaba.

The trio in police custody were said to have been brought to the State Criminal and Investigation Department (SCID), Panti, Yaba, by their parents and lawyers.

Commissioner of Police in the state, Hakeem Odumosu, who had directed that the case be transferred from Maroko Police Division to SCID, said those in custody were helping the command with information on how to track the two who were at large.

He hinted that the command had launched full-scale investigation into the circumstances leading to Oromoni’s death, adding also that the school principal and house masters, under whose care the boys were placed, were also assisting the police with necessary information.

Meanwhile, the newly instituted Dowen College Parents’ Forum has demanded an overhaul of the school management and hostel masters following the bullying that happened under their care, which recently led to the death of a teen. They also demanded the installation of Closed Circuit Television Cameras (CCTV) in the school premises for easy monitoring of students.

Strongly condemning Oromoni’s death, the parent’s said a candle light procession would be held for him today at the school, despite the fact that the state government had shut and sealed the school premises.

The statement by the parents forum read in part: “We urge the school management team and other stakeholders (students and parents directly or indirectly mentioned) to fully cooperate with the authority in the ongoing investigation.

“While we would have loved to bring Sylvester back if humanly possible, unravelling the cause of Sylvester’s death and bringing whoever was responsible or might have contributed in whatever way to book, will not only bring this unfortunate incident to closure for the family, but this will also serve as a deterrent to others in all schools in Nigeria.

“We, therefore, say justice for Sylvester, is justice for all. What happened to Sylvester could have happened to any other child in the school. To many of the traumatised students, Sylvester was a classmate, a roommate, a schoolmate, or a friend.

“We therefore earnestly ask for a resolution that will bring some relief to the bereaved family, other parents, students of Dowen College and the public. These should include a change of the school management and hostel teachers, installation of CCTV cameras in all strategic places and overhauling of the school security system.”

In a related development, the International Federation of Women Lawyers (FIDA), has joined its voice in the condemnation of the alleged acts of violence that led to the death of Oromoni Junior.

FIDA, while describing the incident as “most unfortunate” called on relevant authorities to immediately rise up and nip the ugly situation in the bud.

“It was with a rude shock that FIDA Nigeria viewed the video that has gone viral of Sylvester Oromoni Jr. who was purportedly bullied and tortured while in school eventually leading to his untimely death.

“FIDA Nigeria has noticed that the trend of violence by and to children and youth in institutions of learning is becoming rampant and must be checked and stopped forthwith.

“Reference is here made to the recent incident of a) 11-year-old Don Davies Archibong in Deeper Life High School, Idoro, Uyo Akwa Ibom State and b) 14-year-old, Keren-Happuch Aondodoo Akpagher, a Senior Secondary School (SSS1) student of Premiere Academy Lugbe, Abuja raped in her dormitory and so forth, who have suffered similar violence resulting in grievous injury and death.

“These terrible tales emanating from secondary schools across the nation are an indication of a failing system in dire need of overhauling”, the statement read in part.”

Meanwhile, NBM of Africa, a pan-African organisation, has expressed dismay over the circumstances surrounding the death of the 12-year-old boy.

NBM, in a statement by its spokesperson, Mr. Oluwatosin Dixon, yesterday said it was absurd that the management of the college tried to cover up the matter by reportedly claiming that the boy fell while playing football.

It, therefore, called upon the law enforcement agencies to carry out proper investigation into the matter to ensure that culprits are brought to book.

The group, however, commended the Lagos State Governor Babajide Sanwo-Olu for promptly closing the school.

NBM added: “It is saddening to again record the loss of yet another promising talent to a society devoid of justice and freedom. As a movement, we are constantly striving towards creating an environment where people are made to face the consequences of their actions.

“By holding people accountable, we shall see a world filled with human beings who constantly work for the good.”