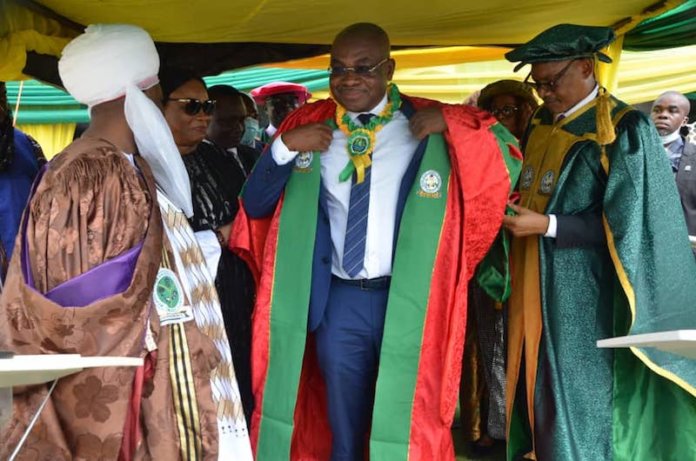 The ancient university town of Umudike was agog on Saturday as prominent businessman and Group Managing Director of Eunisell Limited, Chika Ikenga, was conferred with the Doctor of Science (Honoris Causa) by the Michael Okpara University of Agriculture, Umudike, Abia State.

The businessman was honoured during the institution’s 10th convocation ceremony at the University Pavilion amidst encomiums and applause.

The Vice Chancellor, Professor Maduebibisi Ofo Iwe, in his address said the conferment was in recognition of contributions to humanity and economic development.

The VC added that: “It’s an honour we expect should stimulate the recipients to partner more closely with our University and cause their success stories to rub on the development of Agriculture, Science and Technology in our University.

Ikenga has touched on many aspects of life for Nigerians through his companies. His Eunisell Limited has helped in growing the Nigerian professional football league by sponsoring the Rivers United FC of Port Harcourt and introducing the prestigious Eunisell Boot Award which pays a premium value of N200,000 per goal to football players with the highest score in the Nigerian topflight every season as a way to revitalise goal scoring by strikers in the NPFL. His other company, Recare also owns the Natures Gentle Touch brand which is an household name in natural haircare for Nigerian women.

During his acceptance speech, an elated Ikenga remarked that improved collaboration between the academia and business sector has become more desirable and relevant to assure tangible growth and development for the nation and its people.

He said: “I believe in sustainable collaboration between the university and business circle. The synergy holds the key to unlocking relevant discoveries and solutions that will enhance the quality of life in diverse ways, aid the economy and boost national growth and development.

The Eunisell boss also pledged to continue his support for education by donating significantly towards boosting the school infrastructure, establishing an endowment fund and partnering the chemistry department for joint researches with Eunisell.

“On behalf of my family and company Eunisell, I will engage the university leadership and donate significantly towards boosting infrastructure for a more functional academic environment and thriving institution of learning and research.

“As a man who has applied the knowledge of chemistry in the larger society, my company will partner the Chemistry department and facilitate joint research programs that will benefit the nation. The idea of endowment fund is noble and we shall explore that as well.” he noted.

The industrialist who founded the Group including Eunisell Limited, Eunisell Interlinked and Recare Limited 27 years ago also added that quality education with a focus on technology and entrepreneurship is the pathway to accelerated development as no nation can rise beyond the quality of its human resources.

He noted that “Rigorous and quality trainings that truly shape and build a modern mind for global competitiveness and excellence in the 21st century will enhance national development”.

Abia State Governor, Dr Okezie Ikpeazu who was represented by the Deputy Governor, Udo Okochukwu commended the federal government for the establishment of the university in the state and the school for it’s giant strides under the new leadership and urged the administration to forge ahead as the government will continue to offer support.

Ikpeazu requested for the return of courses that were taken away from the University, which he said would offer opportunity for more students to study at the institution.