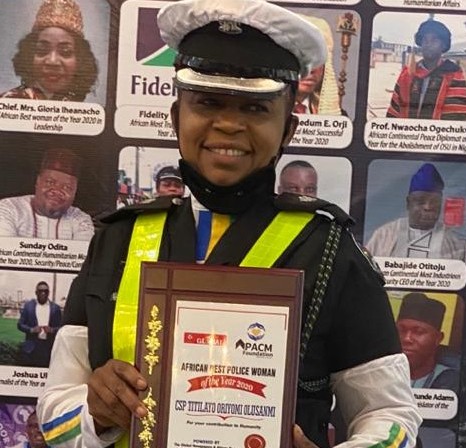 She received the award alongside other senior police officers of Lagos State Police Command who were recommended for the honour by the Police Commissioner, CP Hakeem Odumosu.

As the Motopol of the Lagos Police Command, the CSO is in charge of clearing Lagos roads of traffic which requires grit and wit to tackle, thus earning her the sobriquet as the ‘Face of Traffic Policing in Lagos’.

Since assumption of office from Ilasa Police Division where she was the Divisional Police Officer, she has faced the task of decongesting Lagos, a herculean task.

From ensuring her officers understand that their primary assignment is to decongest traffic, to making sure they dress smarter in their uniforms and are more cordial in their dealings with motorists unlike the situation before, Oluwasanmi has also ensured that they are always on their their duty posts to avoid giving false reports.

Born in Lagos, she attended primary and secondary school in Lagos. She is a graduate of Philosophy from Ogun State Univeristy, now Olabisi Onabanjo University, Ago Iwoye.

She also has a Masters Degree in Leadership and Management from the London School of Management. In 2015, she also attended the Police Officer’s Course in Management in Guandong Police Academy, Guangzhou, China.

After her NYSC programme she enlisted into the Nigeria Police as a cadet ASP in 2002. She was trained at Police Academy, Wudil, Kano. Oluwasanmi is happily married and blessed with children.