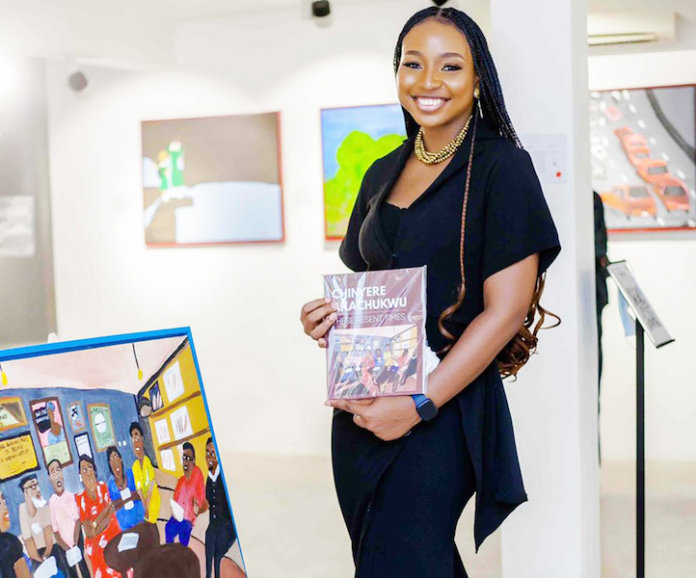 Nestled in an eco-friendly scenery in the heart of Victoria Island Lagos, the secluded lounge, Miliki was the venue for the latest body of works by Chinyere Akachukwu. In producing the acrylic paintings, the UK-trained Nigerian lawyer and self-taught artist had contemplated social-realities in Nigeria-a luxury she could afford during the lockdown. Afterwards, she decided to document the trends and events that shaped the year and beyond. And that was the genesis of the solo exhibition, titled These Resent Times. Curated by Hannah Oghene, the show which kicked off on October 17 amplifies the need to document history and educate people on social causes. Some of the themes highlighted in the various paintings include insecurity, emigration, social media culture, consumerism, capitalism as well as human rights violations.

Though called to the Nigerian bar about nine years ago, Akachukwu had been inclined towards artistic representation of her emotions and thoughts on canvas as a child. After acquiring a first degree in law from the University of Nottingham and a masters’ degree at the University of Birmingham, her parents had been apprehensive about her intense interest in the arts. Eventually, she convinced them that she could balance her legal practice with her studio work.

For her, burying her talent in painting was not an option. Whilst studying for her masters, she began to create her own works.

“For me, it is really about constant self-education,” she says. “I watch a lot of art-related movies and videos about the techniques. I listen to podcasts about art and I visit galleries and I don’t want to be too influenced by other people’s ideas in a way that affects my originality. Sometimes, you may create a work that is based on that.”

In her ‘Surviving These Resent Times’ series, she sought to encourage all who are enduring this tough period occasioned by the Covid-19 pandemic and economic hardship in Nigeria.

“I am telling them that there are different ways of passing through these times. It is not going to last forever. Times change. And there is a series called, ‘It’s Hard Not to Look Back’. And another called ‘Everything Will Be Alright’. And another one is called ‘I Can’t Kill Myself’. When you are going through a difficult time, and you have tried everything that you can and there is nothing left for you to do, don’t dwell on it just do what you can and keep it moving. It is a buzz statement.”

The title These Resent Times derives from both These Present Times and The Resentful Times. In “Japa-Gbapu Oso”, she interrogates the disillusionment that has given rise to emigration.

“Migration is not voluntary for many,” Akachukwu continued. “Some are unhappy to leave. But they had to leave to secure a better future elsewhere and be able to leave if they have to. If you are unhappy about something, I’d say don’t do it, right? But if don’t have a choice, then that means that things are very bad for you and that means you resent what you have to do.”

In “Panic Buying”, she documents the mad rush that accompanied the announcement of the lockdown using a segmented painting of a typical scenario in a departmental store.

In order to commemorate the events of October 2020, she captured the peaceful protest march with the allure of bright colours. “First of all, I am more about documentation of events as opposed to sending across a message. We don’t have a lot of historical documentation. In ten to twenty years’ time, most of us may have forgotten it.”

The show runs till November 7.