‘NEXT TITAN Has Produced Employers of Labour’ 22 mins ago 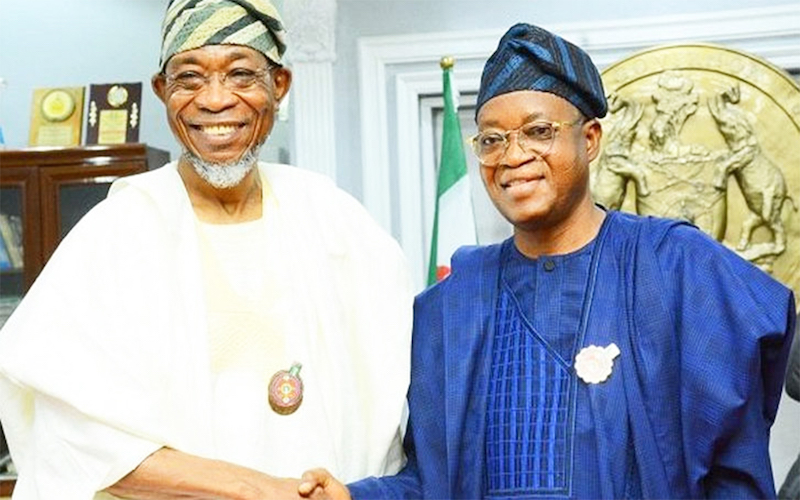 It is no longer a secret that there is no love lost between the supporters of the Osun State Governor, Mr. Gboyega Oyetola, and those of his predecessor and the Minister of Interior, Mr. Rauf Aregbesola. Ejiofor Alike and Yinka Kolawole write that all eyes are on the minister to take a position on the second term ambition of the governor

Despite spirited attempts to keep their disagreements out of public view, signs that all was not well between the Governor of Osun State, Mr. Gboyega Oyetola and his predecessor and Minister of Interior, Mr. Rauf Aregbesola became a public knowledge in March 2020 when the governor approved the reversal of the single school uniform, ‘reclassification’ of the public school system and the abolition of single-sex schools introduced in 2013 by Aregbesola.

Oyetola was Aregbesola’s Chief of Staff when he was the governor of the state.

The two leaders were ardent supporters of the National Leader of the All Progressives Congress (APC), Senator Bola Tinubu, until recently when strong indications emerged that the minister and the former Lagos State governor had parted ways over the 2023 presidency.

The reversals of Aregbesola’s education policies were approved during the state executive council in Osogbo.

The state’s Commissioner for Information, Mrs. Funke Egbemode, had told journalists that the state considered 10 of the 26 recommendations by a panel led by Olu Aina, set up to review education policies of the Aregbesola’s administration.

To dispel insinuations that the governor was fighting his predecessor, she had argued that the panel became necessary after the clamour for the policy reviews by educationists, school administrators, missionaries and school owners.

Issues reviewed include the introduction of ‘Opon Imo,’ otherwise referred to as tablet of knowledge, issuance of primary school leaving certificates, change of schools’ identities, ownership of Ladoke Akintola University of Technology (LAUTECH), operations of Osun State University, merger of basic and high schools across many communities, among others.

Despite her efforts to exonerate her boss from the decisions leading to the reversal, the supporters of Aregbesola, who spoke in hushed tones as at the period because the two leaders were still pretending to be working together, had insisted that Oyetola deliberately took the steps to rubbish the achievements of his predecessor.

With this reversal, many believed the governor had drawn the line for a political battle between him and his predecessor.

In June this year, Oyetola also reversed another policy of Aregbesola, with his approval of the reversal of the state’s Teachers Establishment and Pensions Office (TEPO) to the Teaching Service Commission (TESCOM).

As part of the education reform policy of the Aregbesola’s administration, TESCOM was changed to TEPO, which enabled the administration to hire and cater for the welfare of teaching staff within the secondary school sector of the state.

In line with this, Aregbesola had created three education districts in each of the three senatorial zones of the state with each headed by a Tutor General/ Permanent Secretary overseeing them.

But Oyetola had embarked on the reclassification of public schools from elementary, middle and high school to primary, junior and senior secondary school.

The battle between the two leaders deepened at the recent Congresses of the APC.

Supporters of Aregbesola were known to have organised parallel congresses to challenge the governor’s camp.

Salinsile became Aregbesola’s Chief of Staff after Oyetola had resigned to pursue his governorship aspiration, having emerged as the candidate of the APC.

Salinsile, who also accused the Congress Committee of supporting Oyetola’s group (Ileri Oluwa Movement), said about 20 per cent of wards collation centres were visited by the people in charge of the exercise.

He had declared that his group was collating results of the ward parallel congress it held across the state for onward transmission to Abuja National Headquarters of the APC.

He insisted that the congress committee refused to associate with other stakeholders in the party, except members of Oyetola’s group.

But the APC Caretaker chairman in the state, Prince Gboyega Famoodun, who spoke through his media consultant, Kola Olabisi, said the exercise was violence-free.

Famoodun also said all stakeholders were involved in the activities towards the congress, stressing that Salinsile that complained that his group was sidelined, abandoned his office at the state secretariat.

The battle between Oyetola and Aregbesola took a dangerous dimension when the TOP, a caucus of the APC backed by the former governor, alleged that officials of the state government and the party were planning to attack and assassinate the leaders of the group.

According to TOP, the alleged plan had been reported to the security agencies for investigation and other necessary steps.

While speaking at a press conference, TOP Chairman, Reverend Adelowo Adebiyi, said the planned attack was as a result of the group’s struggle to restructure and re-energise the party, coupled with the outcome of the last Ward and Local Government Congresses of the APC, where it had a good show.

“It is important that we bring to public knowledge this evil intention. Despite that, we have informed relevant security agencies, who had assured us of taking steps to investigate the information and as well ensure protection of the lives of the leadership and members of our caucus.

“The Oyinlola government, which we challenged in the past, was not as virulent as the Governor Oyetola-led government of our party, since the struggle started.

TOP had also denied the allegation that it led the invasion of political thugs at the party Secretariat during the Ward Congress Appeal Committee.

APC’s caretaker chairman, Prince Gboyega Famodun and some members of Oyetola’s cabinet had earlier accused the group’s chairman, Rev. Adelowo Adebiyi of leading the attack on members of the party.

But in a swift reaction, the state chapter of the APC had described as inglorious lies, baseless and perfidious, TOP’s allegation that there was an attack and assassination attempt on some leaders of the group by government officials believed to be Oyetola’s cabinet members.

In a statement issued from party’s Directorate of Publicity, Research and Strategy and signed by its Director, Mr. Kunle Oyatomi, APC had frowned at what it had described as Adelowo’s fabricated allegation, insisting that he failed to substantiate his claim with verifiable facts and evidence.

APC had also insisted that there was no shred of truth in the allegation, adding that the onus of proof was the responsibility of the leadership of TOP.

The ruling party said it was surprised that Adelowo, a religious leader and immediate past Chairman of the party in the state, could be dishing out unfounded and fabricated lies to misinform the public purposely to discredit the ruling party and the government, all in the name of politics.

On his part, Oyetola had in his reaction, appealed to the members of the ruling APC in the state to give peace a chance and allow the appeal process run its full course.

He had also condemned what he termed the “unruly behaviour” exhibited by some aggrieved members of the party at the APC Secretariat in Osogbo, saying no sane society would condone any act of lawlessness.

Apparently worried that the battle between him and Aregbesola’s supporters might deny him the minister’s support for his second term bid, Oyetola had last week argued that TOP was not speaking the mind of Aregbesola, regarding his re-election.

Oyetola, in a statement by his Chief Press Secretary, Ismail Omipidan, said having worked for the success of Aregbesola’s eight-year reign, there was no reason Aregbosola would not support his re-election bid.

According to Omipidan’s statement, Oyetola spoke while featuring on a live radio interview as part of the activities to commemorate the 30th anniversary of the creation of Osun State.

The governor was answering a question on the activities of some chieftains of TOP, who are claiming to be Aregbesola’s loyalists.

He said: “Well, those people – I’m not too sure about the people that have been saying that they are saying his (Aregbesola’s mind). I believe he (Aregbesola) is my brother and I believe at any point in time, he wants my success because I worked very hard for eight years for his own success as well.

“If people are saying that (that they won’t support me) I’m not too sure they are telling the story from his (Aregbesola’s) own heart. He remains my brother. They are not speaking his mind. Like I said, I don’t see why he would not be willing to support me if the people say they want me.

“Talking about issue of second term, my attitude is to deliver on what I am currently doing. I don’t want to be distracted. It is service to the people. If the people believe that they want me to continue, so be it. It is not a desperate situation.”

As the people of Osun State prepare to elect a new governor on July 16, 2022, all eyes are on Aregbesola to take a position on his successor’s second term ambition.

Aregbesola remains a critical stakeholder in Osun politics and his support or otherwise could change the narratives.
Attachments area