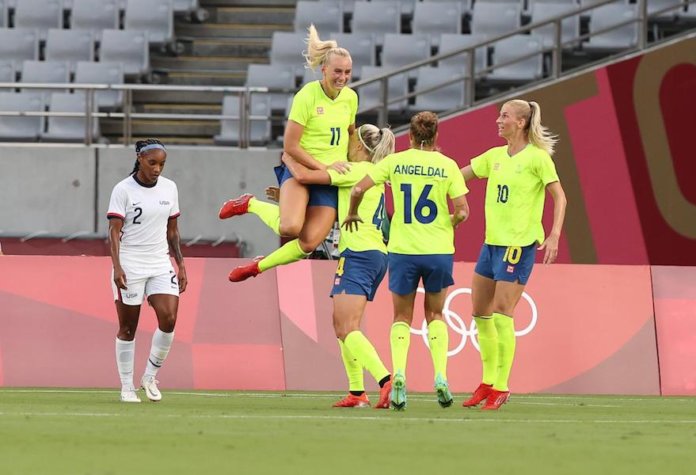 A pair of goals from forward Stina Blackstenius spelled catastrophe for the USA ladies whose 44-game unbeaten run since 2019 effectively ended.

Blackstenius converted for Sweden in the 25th minute, rocketing a header past US goalkeeper Alysssa Naeher with an assist from Sofia Jakobsson. The goalie had five saves in the first half as a dominant Swedish forward line thrashed the Americans’ defences.

The addition of veteran midfielder Julie Ertz did little to revive the US in the second half, as Blackstenius again scored in the 54th minute, and midfielder Lina Hurtig heaped on more pain to give her side a three-goal cushion midway through the second half.

The match was personal for Team USA – The Swedes famously knocked the four-time World Cup winners out of the Olympic tournament on penalties in the quarter-finals in 2016. But their much hoped-for revenge in front of 48,000 empty seats inside the Tokyo Stadium was not to be.

The loss in the opening game of group play doesn’t eliminate the Americans from medal contention, but it leaves them with a razor-thin margin for error.

In just a 12-team field, the U.S. needs to finish second in its group or be one of the top two third-place finishers to advance to the quarterfinals, when the tournament becomes single elimination.

The Americans face New Zealand on Saturday and Australia on Tuesday.

More notably, this performance calls into question just what kind of team this is, and whether it’s even capable of winning gold.

Coach Vlatko Andonovski chose a veteran-heavy group to come here and become the first team to ever follow a World Cup title with Olympic gold.

But with experience comes age, and the Americans started five players over 32 years old. Two of the first three players Andonovski brought off the bench were 39 and 36.

Meanwhile, one of Africa’s representatives in the women’s football, Zambia, were hammered 10-3 by the Netherlands.

In that game, Captain of the Zambia ladies, Barbra Banda made history as she became the first African female footballer to score a hat-trick at the Olympics.

The Tokyo 2020 Group F encounter was the first ever game for both countries in the women’s football event at the Olympics.

The Netherlands also created a new record for the most goals scored in an Olympic football match.