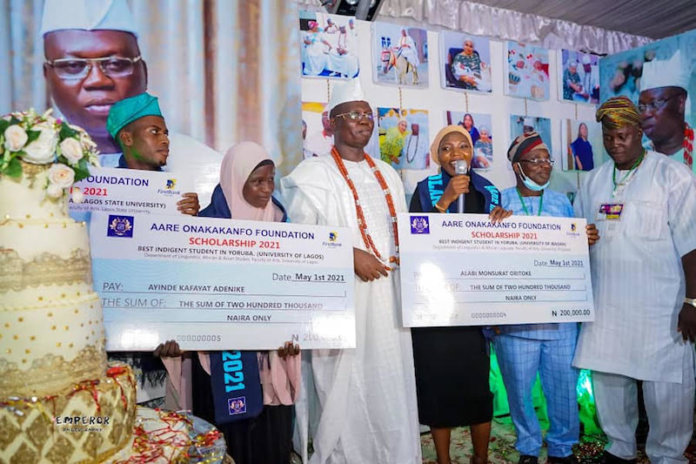 To mark his 51st birthday, the Aare Onakakanfo of Yorubaland, Iba Gani Ige Adams, recently showed love to humanity by spending the day with orphans at the SOS Children Home, Isolo and old people at Regina Mudi Elders Home, Mushin, Lagos. Chiamaka Ozulumba reports that he also gave cash donations to four indigent students from four different universities in the South-west to encourage them take the Yoruba language serious

For over two decades now, Aare Onakakanfo of Yorubaland, Iba Gani Abiodun Ige Adams, has been celebrating his birthday with pomp and ceremonies.

On each of the previous occasions, families, friends,colleagues and well-wishers would gather at an expansive venue to rejoice and share in the joy of the moment with the Yoruba Generalissimo .

For the O’odua Peoples Congress (OPC) leader and also global convener of the OPU, the birthday celebration has been an annual tradition, where he often showcases the glory of God in his life and that of his family.

But this year, the event was actually a bit different from the usual party and merriment. It was one event that will for a very long time linger on in the memory of all and sundry.

Iba Adams had intended to use the birthday anniversary to achieve two lofty objectives.First, to impact the lives of as many people as it is possible and also appreciate God for the grace to witness yet another year, which according to him, was a milestone in his life.

Secondly, the party, he said was also to roll out the drums and sincerely appreciate his numerous guests, that have come from far and near to be part of his success story. Interestingly, Aare Gani Adams achieved both with great joy and excitements. He also did extra by spreading his hands of generousity to orphans and the aged ones in Lagos.

So, on April 30, which actually was the symbol of the day he was born 51 years ago, the Aareonakakanfo of Yorubaland left his ‘comfort zone’ to have a special day with the orphans at the motherless babies and old people’s homes in Lagos.

The Yoruba generalisimo used that singular act to demonstrate his love for humanity. The following day was on Saturday May 1,which actually was on a public holiday.But in spite of that, Berger bus stop, and its environs were shut down as all roads literally led to Cannanland Event Centre, Lagos,where the OPC leader played host to prominent guests, including monarchs,political bigwigs,leaders of socio-political groups, culture enthusiasts, activists,among others.

The Alaafin of Oyo, His imperial Majesty,Oba Lamidi Adeyemi III was the royal father of the event. The first-class monarch, who had earlier visited Iba Gani Adams at his Omole Phase 2 residence, led over 50 monarchs in southwest and beyond to the venue to bless Adams’ new age with prayers and words of wisdom.

In his remarks, Oba Adeyemi, never hid his feelings and excitements as he revealed the secrets of how fate had favoured Adams, using the gods to seal his appointment for the prestigious position of the Aareonakakanfo of Yorubaland.

The Oyo monarch also expressed displeasure at the security situation in the South-west, adding that with the spate of insecurity in the country, it is obvious that bandits and kidnappers have the monopoly of violence,explaining also that the position of the Aareonakakanfo of Yorubaland symbolises that of a warrior that has the capacity to protect the entire South-west.

He pointed out that the dimension insecurity has taken in Nigeria has thrown the country into a huge tailspin, even as he insisted that monopoly of violence is supposed to be concentrated in government but regrettably that was not the case.

The first-class monarch, however, charged the federal government to be proactive in ensuring that the South-west is safe for residents

Oba Adeyemi also commended the Aare Onakakanfo of Yorubaland, Iba Gani Adams for his courage, steadfastness and doggedness in the struggle for the liberation of Yoruba race, adding that Adams has truly proved the gods right that his appointment was divine.

“Aare Gani Adams’ appointment is divine and based on merit.It took me over five years to consult widely and seek the support of the gods in the spiritual realms before he was appointed. He didn’t contest for it neither did he struggled for it. He was divinely appointed and my prayer is that he will lead Yoruba race for a longer time,” the Alaafin enthused.

Meanwhile,the Onifegunwa of Ifegunwa in Ile-Ife, Oba Adewole Adedire, who stood in for the Ooni of Ife, His Imperial Majesty Oba Adeyeye Enitan Ogunwusi, extolled the virtues of the Aareonakakanfo of Yorubaland, saying the Obas and all those that matter most in the traditional institution in South-west will always support Aare Gani Adams in ensuring that the South-west is safe.

In his speech, Iba Gani Adams, expressed appreciation to all the guests and dignitaries that graced the occasion. He admitted also that the ravaging COVID-19 pandemic didn’t allow him to have an elaborated celebration last year when he turned 50, but today he is happy to celebrate his 51st birthday anniversary in a grand style.

“Last year, we only managed to do the special thanksgiving programme, but today, I give glory to almighty God for His grace to celebrate my new age. In commemoration of my 51st birthday. I am very happy and fulfilled to spread joy on the faces of indigent students in four of our tertiary institutions in South-west. Therefore, today Aare Onakakanfo Foundation will give cash donations and scholarship to four indigent students from four different universities, namely, University of Lagos, University of Ife, University of Ibadan and Lagos State University. The cash donation is to encourage the students to take the Yoruba language serious so that it will not go into extinction.”

Adams, however, urged the Federal Government to make sure that the southwest is safe for people,adding that the FG has the capacity to improve the quality of education across the country by initiating programmes that can help brilliant and indigent students across the country.

“As far as I am concerned, this is just the beginning, Aareonakakanfo Foundation will continue to support the students.We will also extend this laudable gesture to other universities”, he said.

The event climaxed with the presentation of cash donation and awards to the indigent students. Beneficiaries of the donations include Miss Alabi Monsurat, from University of Lagos; Oritoke, Ayinde Kafayat Adenike,from University of Ibadan; Okegbemi Taiwo from Lagos State University and Nurudeen Abass Adesinmi from Obafemi Awolowo University, Ile Ife.

One of the beneficiaries, Ayinde Kafayat Adenike, who spoke on behalf of other students, applauded Aare Gani Adams’ gesture, adding that the donations would definitely spur them on to do more especially, in their respective disciplines.

“I want to appreciate our father for counting us worthy of this award. It is not easy to emerge the best students in our various universities and departments, however, it is a reward for determination,hard work and dedication, and I think the award is also to encourage us to be more determined and focused in our studies.

“To our daddy, the Aareonakakanfo of Yorubaland, it is wonderful to be part of your annual success story and I want to assure you that we will not disappoint you, and we will go out there to promote those values and ideals that you believe in and epitomise as a leader and role model of our race,” she noted.

The birthday party had a long list of prominent guests,including royal fathers from Lagos, Ogun, Oyo, Osun Ondo and Ekiti states. Deputy Governor of Kogi State, Comrade Lawrence Onoja; Special Adviser to the Ekiti State Governor on Arts and Tourism, Mr.Wale Ojo Lanre; his Oyo State counterpart, Hon.Akeem Ige; white-cap chiefs representing the Lagos Monarch, Oba Rilwan Akiolu, Oba Dipo Olaitan, the Alago of Kajola Ijesha, Deputy leader of Afenifere, some members of the Aareonakakanfo – chiefs- in Council, members of the Oodua Peoples Congress, and the Oodua Progressive Union (OPU) from all over the world were in attendance.

With sumptuous and assorted foods and drinks for the guests to eat and drink, Aare Gani Adams and his wife, Ayinba Mojisola Adams later took to the stage to dance as popular gospel and Hip-hop musicians, Lanre Teriba Atorise and Fakoya Qudus popularly known as Q.Dot thrilled the guests with great music.

Iba Gani Adams on Friday, May 7, observed a special Jumat Thanksgiving Service at the Omole Central Mosque, Omole Phase II,Ikeja, Lagos. And on Sunday, May 9, he observed a special Thanksgiving Service at the Saviour’s Ministry C&S worldwide, Obafemi Awolowo Way, Alausa ,Ikeja, Lagos. The two events were to express gratitude to God on his 51st birthday anniversary.