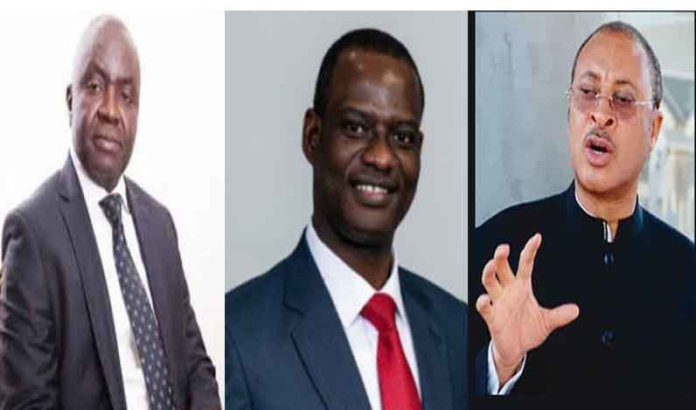 As the federal and state governments consider stringent measures in response to worsening fiscal crisis confronting nationwide, public finance experts yesterday warned that reducing staff strength would complicate their challenges rather than solving them.

Rather than downsizing or rightsizing, the experts challenged the governments to come up with creative fiscal strategies to improve public finance, recommending fuel subsidy removal and an enabling regulatory environment to attract foreign direct investments, among others.

The Nigerian National Petroleum Corporation (NNPC) had alerted the federal and state governments to its dwindling contribution to the federation account as a result of the bloated fuel subsidy.

The state oil giant had noted that it would only be remitting N12.966 billion to the Federation Accounts Allocation Committee (FACC) in June after deducting the value of fuel subsidy from its income.

The document, which was attached to a letter written to the Accountant General of the Federation, was dated April 26 and signed by the NNPC’s Chief Financial Officer, Umar Isa.

Consequently, the letter had sparked stern responses with President Muhammadu Buhari directing the presidential committee on salaries and wages to review and realign earnings of employees of ministries, agencies, and parastatals while some state governments were considering downsizing.

With these stringent measures under consideration, Utomi warned that downsizing or rightsizing would complicate the fiscal quagmire for both federal and state government while Oyedele observed that it would worsen the country’s existing social and security challenges.

Yusuf, in a somewhat persuasive language, canvassed outright removal of the fuel subsidy regime, describing it as an important element of the solution to the fiscal crisis and seeking a creative exit strategy from the subsidy quagmire.

Utomi, founder of Centre for Value in Leadership, explained the budget crisis from two interrelated perspectives, which according to him, revealed the government was not earning enough dollars to fund the budget on the one hand and crude oil prices and sales ran into turbulence in the global oil market on the other hand.

He said the country’s public finance funding primarily “depends on oil receipt. Also, internally generated revenue (IGR) cannot go up at the time businesses are struggling and companies are retrenching. Right now, the private sector is in a weak position. In fact, increasing taxes will compound our problems.”

Utomi, therefore, warned against retrenching in the public service, which according to him, would compound the country’s multifarious economic and security challenges at the time inflation was on the steady increase and unemployment rate unduly scary.

Rather than downsizing or rightsizing being considered by some governments, Utomi noted that the country required more creative approaches to improve public finance, citing the need for the federal government to leverage on its national assets to attract funds locally and internationally.

The political economist cited the case of Federal Secretariat in Lagos, which according to him, had not been attracting the kind of commercial revenue it should generate in taxes after 30 years of relocating to Abuja.

Utomi observed: “If we do things properly in Nigeria, we should not be in this mess. We should internationally value assets like the Federal Secretariat and list in our asset register. Foreign capital will be flowing in to energise such assets to create more wealth.”

Utomi, also, mentioned the case of Nigeria LNG Limited (NLNG), which he said, was the most profitable investment in the country given the billion of dollars it had been generating for the governments at all levels.

He rhetorically asked: “Can you imagine what will be flowing into the country if we list NLNG in the London Stock Exchange? Its value will be much higher than what it is now. We can sell 3% of NLNG shares to raise millions of dollars instead of borrowing to fund the budget.”

The political economist, also, suggested the need “to improve the country’s regulatory environment,” noting that the country’s budgetary process would be quite better if it did not have many regulatory crises.

He, afterwards, emphasised that creating a friendly and responsive regulatory environment “will make Nigeria a destination for investments. We need to give incentives to foreign companies to relocate.

“Private capital is used significantly for infrastructure. Currently, there is $17.1 trillion currently at zero or negative interest rates. This fund is out there. The question is: are we attractive enough for them to come to Nigeria?”

Unlike Utomi who emphasised the injection of private capitals to overcome the country’s deteriorating fiscal crisis, Yusuf challenged the political leaders at all levels to address the issues of high cost of governance and fiscal leakages in their various domains, urging them to scale up the culture of accountability in governance.

Yusuf, a strong private sector advocate, emphasised the need to address the national concern around the restoration of true federalism to the federation, which he argued would encourage healthy competition among the federating units while they leveraged on their comparative advantages.

He, specifically, canvassed the need “to whittle the resource dominance of the federal government and devolve more resources and economic powers to the subnational governments. The current structure would continue to perpetuate the dependence of states on the centre.

“It is also a disincentive to innovation and creativity by the subnational governments. The states can do better with revenue optimization if they demonstrate better creativity with regards to their IGR,” Yusuf explained.

He emphasised the need to improve the quality of the country’s macroeconomic environment, which according to him, would be a major contributor to the current fiscal challenges the country was battling at all levels.

He, therefore, observed that the prosperity of the states and federal governments “is a function of the performance of investors and the health of the economy. Fixing the economy is critical to the attainment of fiscal sustainability.”

LCCI’s general-director, also, challenged the governments to come up with a creative exit strategy from the subsidy quagmire, noting that a huge chunk of oil revenue is used to fund petroleum product subsidy

He said an important element of the solution to the fiscal crisis in the states and indeed all tiers of government “is the resolution of the fuel subsidy conundrum. There should be a creative exit strategy from the subsidy quagmire.”

Oyedele, also Chairman of the COVID-19 Intervention Committee for PwC West Africa, agreed that Nigeria “is clearly facing huge revenue challenges on the borderline of a fiscal crisis across all levels of government” in line with the argument of Utomi and Yusuf.

He described the situation as worrisome citing the very high debt service cost to revenue ratio of about 70% in the past couple of years at the federal level, the embarrassingly low level of IGR at states level and the complete dysfunctional revenue system at the local government level.

Unequivocally, the PwC tax leader faulted the government’s attitude and approach to public finance and spending, which according to him, continued at different levels of government as business as usual.

He lamented that the cases of duplicated expenses, fictitious expenditures, inflated contracts, misdirected and white elephant projects and lavish lifestyle of political leaders continued amid the precarious situation the country found itself today.

He, however, challenged the government “to develop a plan to progressively remove petrol subsidy in a way that causes the least discomfort for the poor while investing the savings to develop infrastructure and social interventions that will not only impact positively on the masses, but also have a multiplier effect on the economy.”

With the right leadership, according to the PwC fiscal policy adviser, fuel subsidy removal can be achieved with full buy-in from Labour and the general public.

Drawing a graphic illustration, Oyedele explained: “Diesel and kerosene that are even consumed more by the poor have long been deregulated. So, each time a poor person takes ‘molue’ or a farmer uses a truck to transport goods, or kerosene to cook food, they pay a market reflective price.

“Why is petrol treated differently? For Nigerians to be willing to make any further sacrifice, however, politicians must lead by example in cutting waste and luxury lifestyles,” Oyedele recommended.

He warned against the plan to downsize or right-size by states, saying such a plan would only compound the existing social and security challenges.

He recommended that the focus “should mainly be on eliminating ghost workers through the use of biometric based identification such as NIN and driving the productivity of civil servants.

“The economy cannot thrive without an enabling public sector. Also the government can leverage data to capture tax evaders and expand the tax net. Budgets should be zero-based with every item properly scrutinised and justified based on value for money.”