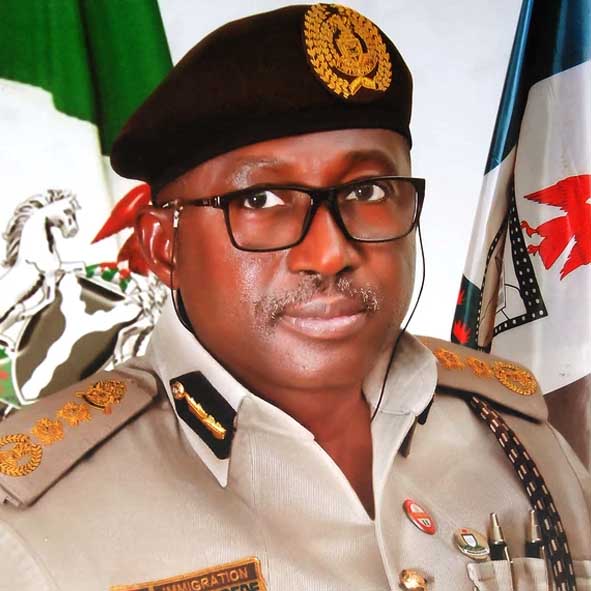 The protests and petitions have been deafening over the failure of the Nigerian Immigration Service (NIS) to promptly issue passports to Nigerians who have applied and paid for them.
At the Federal Capital Territory and in Lagos, there are many applicants who have waited for months for the passport, which they had applied and paid for and had also, been captured in the data base, but they could not obtain their passports because there are no booklets.

But since after the introduction of these enhanced e-passports there has been protracted scarcity of the 32-page booklets, especially in the nation’s busiest passport officer in Ikoyi; that many persons who ordinarily would have loved to request for 32-page passport booklets were forced to go for the 64-page, five years category, which is more costly.

It was the same situation with the mother of his colleague, a 70-year old woman who returned from Canada and requested for the renewal of her passport in February and be the end of April was yet to get the new passport.

“I requested a new passport for my son from the Abuja passport office on January 13, 2021 and since then till today I am yet to get the passport. We went for the 32-page passport but later they said it was not available so we paid for the 64-page passport but we have continued to wait till today.
“I also have somebody who lives in Canada but returned to Nigeria and requested for the renewal of her passport since February, but she is yet to get it. She is about 70 years and the mother of a colleague, so I know.

“She applied for the 10 years passport category. But what is really most annoying about this is the fact that some people are getting these passports. I know two of my friends who have some connection who walked into passport office and collected their passport after few days. This means that the booklets may be available but not enough to go round,” he said.

Debts
THISDAY investigations revealed that the major reason why the passport booklets are scarce is because the producer of the passports, Irish Technologies is allegedly owed debts that run into millions of dollars by the Ministry of Interior.

The Nigerian passports are produced overseas, contrary to the belief that they are produced locally.
The Ministry had a Public, Private Partnership (PPP) agreement with the foreign company, which produces the enhanced e-passport, but it has refused to supply the product due to the alleged huge debts.

THISDAY also learnt that Irish Technologies had met with the Ministry and requested that it should be given easy window to access forex directly from the Central Bank of Nigeria (CBN), which the Ministry was unable to facilitate, but rather was purported told to access forex through the parallel market, which the company said would be very expensive for it.

Burdened with huge debt profile and finding it difficult to obtain foreign exchange, Irish Technologies was thrown into a dilemma. It was this impasse that led to the current scarcity, which inside sources projected would last long; unless there was urgent intervention.

In addition to the above challenge, an official of NIS who preferred anonymity told THISDAY, “Our machines and general infrastructure for capturing and process of passports and other working materials have degenerated. The existing equipment is over worked and they face constant breakdown due to wear and tear. So it is expected that the Ministry will look into this.

“We need ministerial intervention because the Nigerian Immigration Services is a department in the Ministry of Interior. The Ministry endorsed the partnership,” the official told THISDAY.

High Demand
THISDAY gathered that since last year there has been a spike in the demand of passports but many of those who have completed the requirements are yet to receive their passports so NIS faces piling demand which could reach choking level if Immigration continues to delay the issuance of completed passports.

Passport Office Ikoyi, Lagos records the highest passport demand in Nigeria with average demand of 15,000-20,000 monthly, while Festac and Alausa offices produce about 50 per cent of that figure of about 7,500 to 10, 000 passports monthly.

“In 2016, for example, Ikoyi office issued 145, 000 in one year, while Alausa and Festac issued 70, 000 per annum. Before the current leadership we have skilled and trained officers on the enhanced e-passport, but recently those officials have been replaced by other officers who are not trained and this has created hiccups in the process,” government official told THISDAY.

Government Intervention
However, the federal government recently announced that henceforth, the timeline from when the application for a new passport is submitted to the time of issuance should not exceed six weeks.
The Minister of Interior, Ogbeni Rauf Aregbesola, who disclosed this in a meeting with the Comptroller General of Immigration, Mohammad Babandede, Passport Officers, and Attaches for Nigeria Missions abroad, said the Immigration Service would create special centres to fast track service delivery. The special centres, he explained would operate on Public-Private- Partnership basis.

He said a model centre had started operating in Abuja and10 others would be opened nationwide in few weeks’ time and each of the centres he explained would fix the timeline for each applicant to collect his/her passport but would not exceed six weeks.

Aregbesola said the federal government had resolved to be at par with what obtained in the best of climes, adding that the new timeline would allow enough time to investigate and validate personal information supplied by the applicants.

He however added that should there be any unforeseen occurrence that could cause delay, the Immigration officers would promptly notify the applicant at least one week before the collection date.
The Interior Minister also said government intention was to reduce if not eliminate contact by the applicants with officers, adding that government arrangement was for applicants to fill the form and leave the venue and that would be all the physical contact except when picking the passport in six weeks’ time.

He acknowledged that the service had hitherto been bedeviled with challenges such as shortage of booklets, touting, racketeering, which had caused the increase in cost and had made it possible for people who were not qualified to obtain the passport to access them.
The Immigration service also said it would soon publish the list of backlog of applications that have since been ready but their owners have not come to pick them. Aregbesola expressed the optimism that the new service delivery strategy would bring great relief to those renewing and applying for new international passports.

Illegal Deals
As stated earlier, some persons who spoke to THISDAY, alleged that there are booklets which senior officials use as bargaining chips for favours and for monetary reward, noting that, “some people will go there and come back with their new passport.”
THISDAY learnt that in some passport offices in Lagos before an applicant’s file is treated he or she must pay N5, 000 in addition to the cost of the passport and when it is paid the applicant’s file is signed with green biro.

A source told THISDAY that this had been going since 2019 and despite outcry by applicants the trend has subsisted.
“Your file cannot be treated unless you make that payment. It is only when you do so that your file is taken in and you are invited for capture. The N5, 000 is even small; those who want urgent passport can be made to pay any amount possible and you don’t have any other choice than to pay,” the source said.

New Passport Regime
But the Nigerian Immigration Service has introduced new passport application policy, which insisted that all current passport backlogs must be issued on or before May 31, 2021 and those with issues with their application would be contacted.

“Names of all those whose passport are ready and currently waiting for collection will be published in the dailies and they will be required to visit the Command Head Quarters in the state where they applied for collection. New passport application regime begins June 1, 2021. Passport application processing to collection has now been standardized to take a total of six weeks. Those who desire express service of 24hrs-72hrs waiting time, can visit any of the passport express centres,” statement from NIS said.

Immigration also said a zero-tolerance stance to all forms of touting has been declared, noting that no applicant would be made to pay any illegitimate fees.
“Security operatives – seen and unseen – have been embedded in all passport offices. They will wear body cameras. They will detect and report any form of solicitations, inflation, improper communications, extortion, diversion, hoarding and other corrupt practices.

“Those caught will be dealt with according to the law. An ombudsman has been created for members of the public to receive complaints and reports on officers trying to deviate from prescribed guidelines and subversion of the process.

“Applicants will have no basis for further communication with officers, other than to complete their application process and leave the venue. The date for the collection of their passports or any challenge to the application will be communicated to them. The technology for the efficient running of this system has been acquired,” Immigration said.

Patronising Touts
The Public Relations Officer (PRO), Nigeria Immigration Service, Mr. Sunday James, urged applicants to follow due and recognised process of obtaining passports and not to patronise touts.
“Ask those who are complaining of not being able to get their international passport out who they went through because at times, they go through touts. We have sent out circulars and write in the newspapers that people should apply online and when they have problems they should let us know.

“When they have problems with the area boys, they will now run to the media. It is a very shameful experience when they do this. We tell them not to go through a third party and if they go through a third party and the person is not in passport office, it is also a criminal act. Let them stop patronising people. Let the system work for itself. We have a systemic issue that works and not someone helping the people,” he said.
However, the recent scarcity of passport booklets has been acknowledged by top officials of the Nigerian Immigration Service.