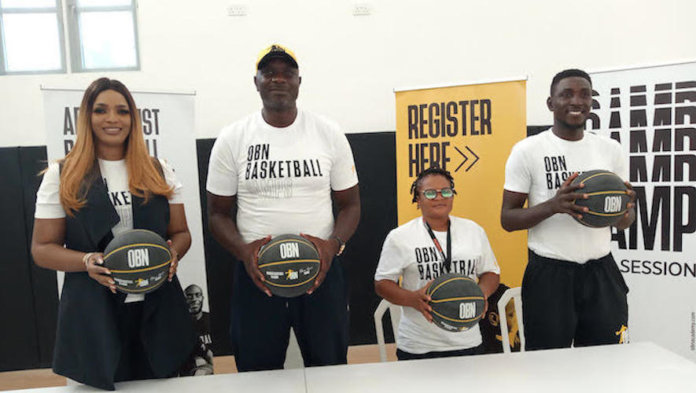 The Academy, a 700-capacity state-of-the art facility is situated in Ajah area of Lagos Island.

Speaking with THISDAY recently, Ekezie who played five American NBA teams including Vancouver Grizzlies, Washington Wizards, Dallas Mavericks and Los Angeles Clippers between 1999 and 2005, said the OBN Academy has been his dream in the last 20 years.

“The Academy is essentially for the development of kids between 6 to 18 years. I have since realized that the biggest challenge facing basketball growth in the country is infrastructure and that is why we have gone the extra mile to put in place an academy with all the necessary facilities to help the kids reach their potentials,” stressed Ekezie who was flanked by his wife Noella and two of the academy’s coaches: Gift Anukam and Louis Aghaulor.

The OBN facilitator insisted that as someone who enjoyed American collegiate basketball facilities and played in the NBA, he knows the several opportunities that are available for Nigerian children to tap from.

“I did high school and college education in Maryland and aware of over 300 schools where our kids can get basketball scholarships to help them develop.

According to him, the purpose for setting up OBN Academy is to “develop these children to make sure that they can compete with the rest of the world in terms of their talents. We want a situation of combining basketball with education so that they can have something to fall back on after their basketball careers. “Don’t forget that the life span of every sportsman or woman is short.”

Ekezie who prior to his NBA career played with the Maryland Terrapins between 1995 and 1999, said it is for the reason of quality education that the OBN Academy is partnering several schools around the neighborhood where the facility is based.

“We are going to partner multiple schools around the area to develop the basketball talents and also set up a sustainable befitting high school or secondary school basketball league and also encourage schools managements to build their own facility as this will be a huge opportunity for the development of basketball in Nigeria.”

The former NBA player who also had stints with Red Star Belgrade in Serbia, Lottomatica Roma in Italy and Dynamo Moscow before calling it quit, remains excited by basketball talents in the country.

“Nigeria produced nine NBA players last year, the highest in the world aside the United States. Many Nigerian players have made the NBA most of the time with little or no development here in Nigeria.

“Take for instance, the men’s league has been off in the last three years due to squabbles in the governing of the game in Nigeria. This Academy is to give the kids the chance to get their talents honed by experienced coaches we have here through a youth league.

Apart from the basketball hall capable of seating 700 fans, the OBN Academy also boasts of a well-equipped Fitness Centre for aerobics as well as a studio with High Definition equipment for producing quality podcast contents.