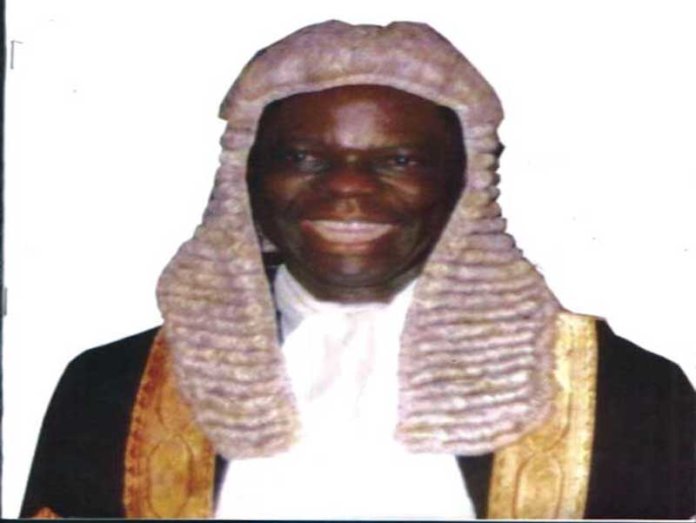 This well-deserved Tribute by Alade Rotimi-John to late Professor Jelili Adebisi Omotola, SAN, Vice Chancellor, University of Lagos (1995-2000) to mark the 15th anniversary of his death which occurred on March 29, 2006, articulates Prof’s vision for University of Lagos while he was at its helm of affairs, ranging from his promotion of academic excellence to his financial prudence, while also ensuring good staff and student welfare, amongst his many other achievements

One of the many tragedies of our system in Nigeria, is the popular justification of mediocre performance as the standard for doing things. A certain pettiness of soul has filled the entire space with disgust, and has curiously infected even those who cared at the beginning save the sycophants and time servers. This situation is responsible for the seeming difficulty to sift the wheat from the chaff. There ought to be, for instance, a reasoned approach to things rather than a haphazard or flippant treatment of matters of strategic importance. Nigeria is blessed with a near-limitless array of persons who ought to be strategically placed to reverse her misfortune in many areas of her socio-economic, political and scholarly endeavours. One notable graceful incursion into the Nigerian public space is Professor Jelili Adebisi Omotola, Senior Advocate of Nigeria, and the 7th Vice Chancellor of the University of Lagos, who has joined the saints triumphant and now may be looking from his height at our foibles. It may not be an exaggeration to say that the Late Professor Omotola is, to this date, the most successful Vice Chancellor of the University of Lagos.

As Vice Chancellor of a recurrently-troubled University of Lagos, Professor Omotola set out to provide a canon of correct performance in the public arena, as he jettisoned the business-as-usual approach to the management of one of Africa’s most prestigious institutions of learning. Omotola articulated his vision for a better University of Lagos in what has come to be known as the Omotola Agenda, which contained a dynamic plan of action. The thrust of the agenda, was to give the University a world class status. Omotola refused to be bitten by the bug which leaves potential public office holders unprepared for their office, and slows down their activity as they assume office. He had a vision of action outlined in six heads of action plan, namely: (1) Creating and Sustaining Academic Excellence; (2) Improving the Welfare of Staff and Students; (3) Broadening the Financial Base of the Institution; (4) Improving the Infrastructural Facilities in the ivory tower; (5) Administering Justice promptly and honestly; and (6) Fostering Strong External Relations for the University.

In all of these, Omotola pursued a cardinal policy of harnessing all available resources – human and material – to create an enabling environment for sustainable peace, progress and security in an atmosphere of mutual respect. Students, as the largest and easily irritable rights group within the University community, required to be attended to with tact and a sense of fellow-feeling. Omotola looked into their problems and provided insightful solutions to them, as a matter of priority.

Academic excellence, is created or fostered by a sustained fair and progressive decision-making and programme-implementation policy. Through a competitive selection process for admission of students and of the appointment or employment of staff, a university community is on the road to optimally performing its strategic role. To the eternal credit of his period in office as Vice Chancellor, normal academic programmes of the University of Lagos were not disturbed or disrupted for a single day.

Omotola made great efforts to ensure that as many members of staff as possible, became home owners in their own right. Reasonable grants were offered allotees of land at Pasade and Oke-osa, to facilitate the commencement of a radical home-ownership scheme. Those in university-rented houses, were encouraged to relocate to their personal homes. By so doing, Omotola was able to relieve the University of the burden of a N10 million annual cost of housing some 162 staff occupying rented accommodation. N10 million of those days, can today be conservatively expressed to be in the region of hundreds of millions of Naira . It was a whopping sum, even in those days.

Easily the most successful of the Omotola prodigious programmes at the University of Lagos, was the then novel Internally Generated Revenue genre. Omotola blazed the trail in effective and efficient revenue generation, in university administration. By this creativity the heavy dependence or reliance on subvention from Government and donor agencies. was reduced drastically. Unprecedented before his time, Omotola ingeniously devised ways and means for income-earning activities. Every unit of the university. was positioned as a cash centre. For instance, the use of university property attracted the payment by the hirer of some economic rent. The parking lot became commercial, even as the University of Lagos Consult became a profit centre. There was a general overhaul, of the university’s income-generating units. Appropriate or cost-reflective bills, were charged for electricity consumed on campus.

Omotola was irked by the unsightly physical and emotional outlook of the university environment. Within three years of his administration, the university witnessed a complete turn-around respecting its fading image. Some of the landmark achievements under him include:

– The renovation of the university’s sprawling staff quarters.

– The full automation of the university library

– The construction of a number of faculty buildings e.g., Pharmacy, Science, etc.

– A face-lift manifesting in a new lease of life for many faculties for the first time in their many decades of existence.

– The construction of the magnificent 5,000-seater Multipurpose Hall (appreciatively named after him) which has improved the Unilag skyline, and has since been a convergence point for fostering town and gown relations even as it buoys the revenue base of the institution through it regular hire or patronage.

Through a programme of constant dialogue and of regular consultative meetings, the Omotola administration was able to ensure justice, harmony and cohesion among the rank and file of the university staff. The polarisation that hitherto existed among staff vanished for the first time in the history of the university. The three unions, (ASUU, SSANU and NASU) for example, jointly presented a position paper to the Governing Council during the negotiation for improved conditions of service of the university staff in 1996 – a great feat considering their mutually – combative or antagonistic stance on any matter.

The deft combination of the inherent rigours of academic life with the casual grace, the rancorous humour and the invadingly friendly overtures of social life were essentially Omotolaesque. Under Omotola, town and gown were locked in a mutual embrace of commonality of interests. Omotola won the people’s esteem and affection, with his speeches and rare approach to issues. His speeches rarely moved on the same tenor throughout. They may not be as finished, for instance, as Awolowo’s cadences, but there were in them passages of great eloquence. He maintained his sense of proportion. The gracious social life around him, did not suffice to relieve him of his frustration over the growing tension within him for transforming a beleaguered institution.

Omotola’s professional trajectory became honed, as he came to be extensively quoted in cases at the apex levels of our court system. At the Supreme Court (Savannah Bank v Ajilo), and in particular, the judgement of Karibi-Whyte, JSC; (Chief Nwokocha v Governor of Anambra State; Abioye v Yakubu 1981 and at the Court of Appeal in LSDPC & Ors v Foreign Finance Corp & Ors 1987), Obikoya & Sons Ltd v Governor of Lagos State 1987. Omotola was a regular Amicus Curiae at both the Supreme Court and the Court of Appeal, offering insightful direction to convoluted matters. The thorny issue of land ownership in Abuja once required the learned presence of Omotola at the Court of Appeal and at the Apex Court on the 16th of January, 1995 in the celebrated case of Awojugbagbe Light Industries v NIDB & Chinukwe (1995). Omotola addressed the court on the conflicting decisions of the court in Solanke v Abed and Savannah Bank v Ajilo relating to the effect of non-compliance with statutory provisions requiring consent for interest in land. This unarguably is the first time in the history of the court, that a university law teacher would be invited to address it.

Omotola was conferred with the highest or most prestigious professional practice honour of Senior Advocate of Nigeria (SAN) in 1999, as recognition of his primus position in the pantheon of intense law practitioners. Professor Omotola received numerous academic recognition. Between 1987-1990, he served on the Governing Council of the Nigerian Institute of Advanced Legal Studies; Member, Governing Council, Nigeria Law School, 1987-1991; Chairman, Nigerian Bar Association Committee on the Review of Nigerian Land Use Act, 1988; Member, Joint Committee of the Body of Benchers and Council of Legal Education on admission requirements for LL.B; Life Bencher, 1988 – being honour bestowed on him by the Nigerian Body of Benchers for his meritorious service to the legal profession.

With 50 published articles to his credit in various law journals including his magnum opus, Primogeniture in Customary Law: Survival of Culture in the University of Indiana Law Review Vol.15 (2004), Omotola has etched for himself a place of distinction in published works, court references, editorials and professional academic critique.

With characteristic fair-mindedness, he privately or self-effacingly considered the awards to him of many benefices as undeserved tribute.