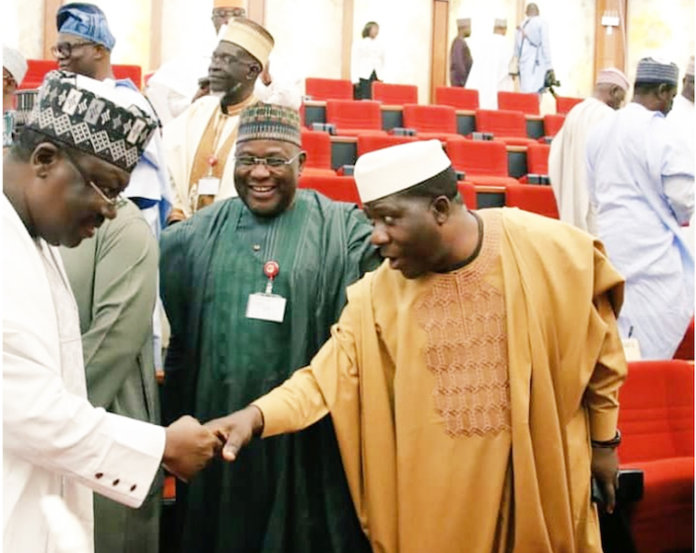 As calls for restructuring gather momentum in some quarters especially with worsening insecurity, Senators from the Southern part of the country have announced the emergence of their umbrella body, promising to help unify the nation.

The nation currently is faced with so many challenges bedeviling it. Issues such as banditry, kidnapping, insurgency, arson, farmers/herders crisis, ethnic profiling, identity politics and so on have become the order of the day, as Nigerians everyday fear for their lives.

Members of the 9th National Assembly since their inauguration have lent their voice, proffering one solution to another to the Executive arm of government on how to curb the menaces, through Bills and resolutions to various motions passed. Though their efforts have yielded little or no results, the lawmakers are not relenting in their resolve.

As the Southern Senators, toed the path of the Northern Senators to elect its leadership, the question on everyone’s lips is, what really is their objective?

According to Omo-Agege, “We are united – both the northern and southern senators forum. We are united behind the leadership of the ninth Assembly headed by Dr. Ahmed Lawan. By June 11, we would have been in the ninth Senate for two years.

In his speech, Bamidele pledged to hold the position in trust, and ensure Nigeria’s unity.

“We appreciate the honour bestowed on us by our colleagues. It’s a position we are holding in trust. It requires us to be at our best to be able to manage our unity in diversity. We also look forward to working to further strengthen the leadership of the Senate itself, while also providing a voice for the people we represent as well as also doing all we can to ensure that the unity of Nigeria that we are all looking forward to is strengthened.”

The new Forum is yet another revival of an already existing one. The last time the Southern Senators had a union was between 2006 and 2007 during the Senate Presidency of Ken Nnamani with Ifeanyi Ararume as its Chairman. Again in July 2017, barely a year after the Northern Senators revived their own union Southern Senators in the Eighth Assembly called Southern Nigeria Senators Forum (SNSF).

The SNSF as at then, announced its leadership with Hope Uzodinma (PDP, Imo State) as Chairman with Lanre Tejuosho (APC, Ogun) as Vice Chairman. The union, according to them would serve for Southern Senators the same purpose the Northern Senators Forum (NSF) then led by Abdullahi Adamu (APC, Nasarawa State) had served for the northern lawmakers since 1999.

Godswill Akpabio, who was the Senate Minority Leader then, while unveiling the union at the National Assembly disclosed that the union would assist lawmakers to better articulate issues affecting their people. Akpabio explained that the group was apolitical, because it cuts across the various parties represented in the Senate.

In his remarks, the then Chairman Uzodinma said the Southern Senators caucus would play a vital role in promoting the unity of Nigeria. He said the SNSF would pay particular attention to recent agitation by various sectional groups across the country.

However, with the emergence of the Southern Senators Forum, there are doubts if the lawmakers could live up to their promise and true objective of creating the group.

Given the controversies that trailed their northern counterpart, only time will tell if they would be able to stand the test of time.

Things took a dramatic turn when in February 2018 Adamu was removed as Chairman of Northern Senators’ Forum over alleged mismanagement of funds belonging to the group His removal was announced via a letter read by the then Deputy President of the Senate, Senator Ike Ekweremadu, shortly before the end of one of primaries he presided over.

The letter signed by the forum’s spokesperson, Dino Melaye, who had announced his emergence, noted that Adamu was removed for ‘financial mismanagement and misadministration.’

Shortly after the announcement, Shehu Sani (Kaduna-APC), who was a member of the forum, also alleged that Adamu and other executive members mismanaged about N70 million belonging to the group.

But explaining why he was removed, Adamu, denied allegation that he mismanaged funds belonging to the group and said the allegation was raised against him, because he rejected the passage of election sequence by the Senate.

The crack took another dimension as Senator Ali Wakili (APC, Bauchi South), disagreed with his colleagues on the removal of Adamu. Wakili said there was no meeting, where members reached the decision to remove Adamu, adding that his constituency and prominent leaders in the North were scandalised by what had happened. Besides, he said he got to know about the removal from the media and that such announcement was a breach of his privilege.

Reacting, then Senate’s spokesperson, Sabi Abdullahi, denied leading some senators to the press centre to make comments on the removal.

“I came a little bit late and I got the information that my good brother, Malam Ali Wakili made some comments alluding to the fact that as the spokesman of this senate, I led some people to the press centre to make some comments with respect to the issue of the Northern Senators Forum. I want to make it categorically clear that as the spokesman of the senate, I’ve always tried to remain very focused on defending the institution of the senate.

“Yesterday I went to the media centre as part of my statutory responsibility to brief the senate press corps on happenings within the senate. Senator Shehu Sani and Senator Misau followed me as I normally do.

They joined me and in the process, they asked him some questions and he responded. But yesterday I made it very clear that that I’m not holding brief for northern senators forum, even though I’m a member. The clips are there and if there is anyone, who has anything to the contrary, I challenge him to bring that clip out,” he said.

Truth is, both the northern and southern forums have a lot to deal with at this time. Therefore, constituting the Southern Senators forum was timely yet challenging because it is not going to be a tea party, not for their northern counterpart either.