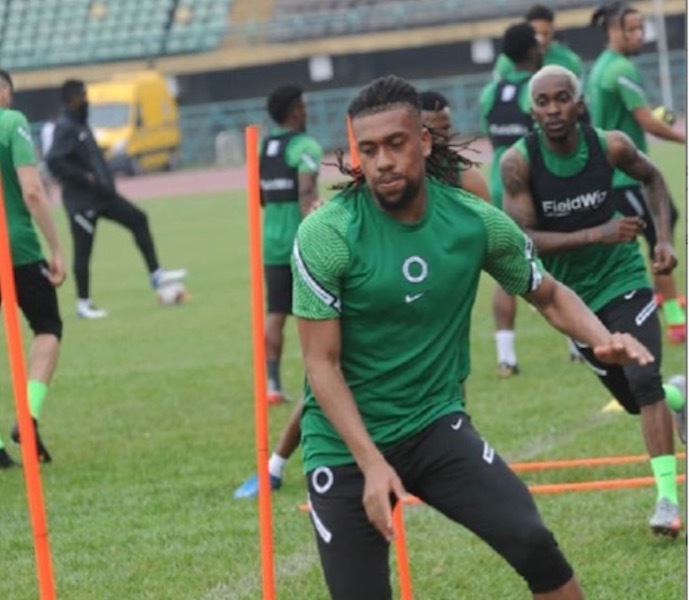 Three-time African champions, Super Eagles of Nigeria will be hoping to qualify the 2022 African Cup of Nations slated for Cameroon as they go for the broke against the Squirrels of Republic of Benin, therefore, making their last game against Lesotho in Lagos a mere formality

The Super Eagles will be craving to book their place in the 2022 Africa Cup of Nations for the 19th time as they confront the Squirrels of Benin who are equally battling to qualify for the biennial showpiece.

Nigeria top Group L having amassed eight points, while Republic of Benin is second on the table with seven points and a victory for any of the countries would ensure qualification for the Cameroon party.

Nigeria soccer fans would however be hoping that in-form strikers, Kelechi Iheanacho and Paul Onuachu would be able to re-enact their clubs’ form for the Super Eagles against the Squirrels.

While Iheanacho has scored nine goals in his last nine games, Onuacho currently tops the goals chart in the Belgian league and has scored 27 goals in all competitions.
Meanwhile, Nigeria national team coach Gernot Rohr believes the Republic of Benin will be a hard nut to crack, given their recent performances.

The three-time African champions will square off against the Squirrels at Porto-Novo’s Stade Charles de Gaulle today.
Michel Dussuyer’s men are on a five-game unbeaten run, having last tasted defeat against the Super Eagles in their first AFCON qualifying game in November 2019.

Their home form has also been spectacular, given they have not lost in eight years, having last tasted defeat on home soil against Algeria in 2013 and Rohr has warned his side to be battle-ready for the encounter.
“Benin have not lost a match for eight years at home, the last time they lost was in 2013 so you can imagine that we want to be the first team to win there in eight years,” Rohr told reporters.

“It will not be easy, they have a very good defence, they were quarter-finalists in the last AFCON. They eliminated Morocco.”
Rohr also revealed Benin had all the players needed for the game as the country provided a private plane for their stars based in France to ensure they honour the match.

The provision of a private plane has been part of the conditions given by the French government before players in the top two leagues could be allowed to leave for international duty.
The rule prevented Nantes forward Moses Simon from honouring the Super Eagles invitation and Genk forward Paul Onuachu was drafted in as his replacement.

“They have a private plane to help the French-based players, what we could not have, unfortunately,” he continued.
“They found the money to take a private plane and to bring them back by charter. This was the condition to get the French players.”
Rohr on Wednesday said he would use the 2021 Africa Cup of Nations qualifiers against Benin and Lesotho to “restore a winning mentality” to the squad ahead of the 2022 World Cup qualifying campaign.
This will be the only chance for Nigeria to play together before the next international break in June when they open their Qatar 2022 campaign.

They are drawn against Cape Verde, Liberia and Central African Republic with only the overall winners advancing to a final playoff to be played on a knockout basis in November.

“We are keen to restore a winning mentality to the group ahead of very crucial games we have,” said Rohr.
“It is important that we earn victories in the upcoming matches so that we get into our paces for the FIFA World Cup qualifiers,” he said.
“There will be tough games to come and we will be raring to go.”

The Super Eagles have been relatively unaffected by travel restrictions caused by the Coronavirus pandemic and are able to call on their top players like Victor Osimhen from Napoli, Leicester City pair Kelechi Iheanacho and Wilfred Ndidi and Samuel Chukwueze of Villarreal.
Meanwhile, Fulham defender Ola Aina has vowed to make the Super Eagles fans happy by winning today’s Africa Cup of Nations qualifying match against the Republic of Benin.

The Chelsea academy product has been one of the key players in a Fulham side battling to beat the drop, starting all but one of their last 27 matches in the English Premier League.

Aina probably stands a good chance of making Nigeria’s starting lineup to face the Squirrels as Hoffenheim defender Kevin Akpoguma has not been called up for the games in March due to fitness issues. “My ambition is to always be better and progress, you can learn something new every single day,” Aina said.

“We have to play, we have to make the fans happy somehow, and hopefully that’s how we can win the games and hopefully qualify.”
With three–pointer Sierra Leone scheduled to commence hostilities with bottom placed Lesotho at 3p.m., and Nigeria and Benin due to kick off at 6p.m., it means the match in Southern Africa would have ended before the group leaders take to the pitch of Stade Charles de Gaulle in West Africa.

A draw in Maseru sends Nigeria through to the finals in Cameroon, but the armada of Europe–based actors that Nigeria has again assembled say they are not interested in the encounter in Maseru and would rather concentrate on achieving a double over the Squirrels.
“We are not looking at what happens in Lesotho,” said Captain Ahmed Musa. “It is not necessary for us to bother ourselves with what they play. Our focus is to get the three points in Porto Novo and wrap up qualification. Three points will get us to Cameroon no matter what anyone plays, and that is what we are determined to get.”

The Nigeria Football Federation (NFF) has confirmed that the Eagles contingent will travel from Lagos by waterways to Porto Novo on Friday morning, where they will disembark and head to Cotonou by road to stay the night. The team moves to Porto Novo this morning and returns to Cotonou after the match.

Meanwhile, President of the Nigeria Football Federation, Amaju Melvin Pinnick, assured that the team was happy to travel to Benin Republic by the waterways in Lagos State, where the contingent is camped this time, “is the State of Aquatic Splendour.” He praised Governor Babajide Sanwo-Olu for his many youth development schemes that were changing the face of Lagos State.

“I believe the Eagles will not only win in Porto Novo, they will come back and beat Lesotho and still play many more matches in Lagos going forward.”
Nigeria lead Group L of the qualifiers table with eight points from four games and victory over Benin or Lesotho will seal their place at the 2022 Africa Cup of Nations, scheduled for Cameroon.