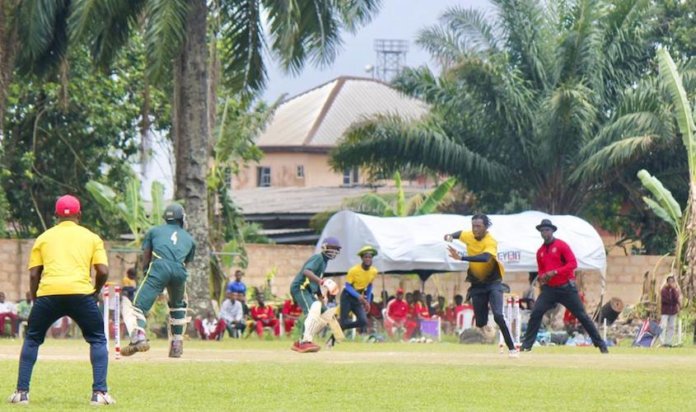 Lagos and Edo states served a nail-biting duel in the closing match of Pool A at the Cricket National Men’s Championship in Benin City. The host state humbled the star-studded Lagos team with 4 runs.

Despite the loss, Lagos still topped the group leaving Edo to the second place, while dashing the hopes of Anambra who had earlier in the day shoved Kwara aside hoping to ride on Edo’s defeat to the semi final.

National Under- 19 Coach, Uthe Ogbimi, who is also working closely with the the Head Coach at the event praised the doggedness of the Edo State team saying it brought out the best in them.

“I think the two teams that qualified justified their places in the semis though both team showed some level of vulnerability that I believe they should go back and address as the game progresses to the 50 over round,” he said.

Teams Anambra and Kwara will now have to leave the tournament.

Meanwhile, the four teams in the Pool B, Rivers, Ebonyi, Kaduna and Oyo will take to the Turf Wickets for their preliminaries from today through Saturday, March 27 at the Edo Boys High School in Benin City.

Kaduna and Rivers will open the rounds for the group by 9:30 am while Ebonyi ( a last minute call up to replace Delta State that pulled out of the event) and Oyo State will duel later in the afternoon.

The Technical Director of the Nigeria Cricket Federation, Enesi Habeeb, said the event has lived up to its billing as most of the players at the event have widened the national teams considerations through their show at the Championship.

“This event is living up to what we hope it would achieve for us in team selection and technical details. Its obvious we have a lot of work to do and I believe the National Head Coach, Asanka (Gurusinha) who is also on ground and has taken notes,” he concluded.

The Championship would be rounded off by March 31st.