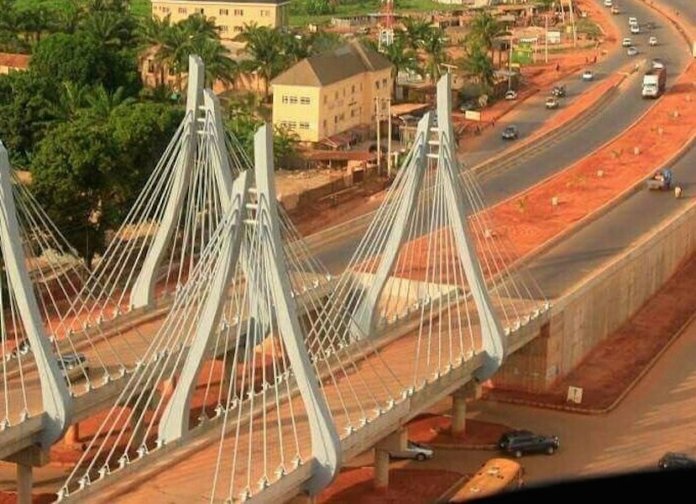 The three flyover bridges built in Awka, the Anambra State capital by Governor Willie Obiano have recently come under attack, with many saying the flyovers are on the verge of collapsing. David-Chyddy Eleke examines the criticisms

That Governor Willie Obiano of Anambra State was in a hurry to develop the state upon his swearing in as governor in 2014 is not in doubt. Shortly after he was sworn in, in March 2014, in his first ever executive council meeting, Obiano announced the plan of the state government to beautify the state capital, Awka. To do this, he began with the plan to build what he called three iconic flyover bridges in Awka. The first at the popular Aroma junction, another at Kwata Junction and the last at Amawbia junction.

Many doubted the sincerity of the government about the plan, but just days after the announcement, the contractors went to work, demolishing the roundabouts in the various junctions where the flyovers were expected to be built. Within his first two years, Obiano successfully delivered three aesthetically built flyovers, which he said was modeled after the hanging bridge of London. To further enhance its aesthetics, Obiano installed a very bright light on the top of the bridge, which illuminates the entire vicinities where the flyovers are located, while grasses were planted around each of them too, to enhance their beauty.

Today, the lighting installed on the three bridges now gives the state capital some sort of illumination at night as one drives by. This is made even better as the state government through its improvement in security has created a night life that now comes off as a revenue earner for the state.

Even before the bridges were delivered, criticisms had begun pouring in about the choice of the model of the bridges chosen by the governor. Many insisted that such model of flyover bridges that required building cement and rod embankments and filling it with red earth was no longer in vogue, while others criticized it for its cheapness. Yet another group insisted that the governor was building a death trap that would not last, thereby wasting the money of the people.

In an interview the Minister of Labour and Employment, Dr Chris Ngige held with journalists prior to the 2017 governorship election when Obiano was seeking reelection, he told journalists that when his party takes over the reins of government, it would demolish the flyover, but he later recanted, when criticisms started pouring in about the demolition being a waste of funds belonging to Anambra State people, since the funds used for the building of the flyover was Anambra’s.

When eventually the bridge became a reality, and the state government decided to erect a barricade to stop heavy duty equipment and other articulated truck from plying it, the governor’s traducers went to work again, insisting that the barricades were erected because the government knows that it built a substandard bridge that could collapse any moment. It took the state government lots of explanation that the barricade was just to ensure that since the flyovers are hilly, trucks may lose their brakes and roll back in the processing of ascending it, thereby causing havoc.

Even with the explanations, the belief that the bridges are substandard have not gone away. Just last week, a picture surfaced on the internet, where members of the opposition stated again that one of the bridges, precisely the one at Aroma junction was on the brinks of collapse. The picture which was all over the social media warned indigenes of the state to desist from using the Aroma flyover as it may give way any moment. The picture circulated on the internet showed a part of the bridge, with a huge crack.

As the argument continues, the bridge is already over six years old, and the governor insists that he knows the quality of flyover bridge he built, and that he was confident it would last very long. The opposition is however not relenting, as they continue to criticize the project at every little opportunity.

The state governor, Chief Willie Obiano, in replying to the rumours, has however said that there were no fears at all that the flyover bridges he built were collapsing. Obiano who inspected the bridges referred to them as ‘iconic’, insisting that the state government engaged the very best in the world of construction in building the flyovers, and that feasibility studies was carried out on the kind of bridges it was building, before embarking on them, and that the three bridges were built to last a long while.

Represented by the Commissioner for Works in Anambra State, Engr. Marcel Ifejiofor, Obiano said “the iconic Aroma Flyover is strong and safe”, contrary to the insinuations and scaremongering on social media questioning the safety of bridge. Ifejiofor stated that the alleged crack being posted around by scaremongers has nothing to do with the bridge insisting that the integrity of the bridge is not compromised in any way. He explained that the minor gap is on the side embankment on the Enugu approach was only added following an accident involving a big lorry on the Kwata bridge.

Ifejiofor who took journalists on inspection tour of the bridge said, “Aroma flyover bridge was built to global standard. The expansion which they talked about is an intrinsic part of bridge construction and does not indicate a crack. The three Flyover bridges at Aroma, Kwata and Amawbia were awarded in 2014 and 2015 are safe not to mention the 15 other bridges built across the state by the Obiano administration. I assure Ndi Anambra of the commitment of Governor Obiano to the safety of lives at all times, the barricade on the bridges are normal safety measures against big lorries rolling back from the bridge.”

Also, IDC, the company which constructed the flyover bridges, speaking through the construction Manager, Engr Yousssef Zghaib, said the embankment which had cracks, which was being shown on the social media has no correlation with the integrity of the bridge. He said the bridge is a separate unit, away from the embankment, and that accidents atop the flyover, in which a car hits the embankment can affect it, but would have nothing to do with the flyover. He assured that there is no cause for alarm, saying that Aroma bridge is safe.

By November this year, Anambra State would go to polls to elect a replacement for Obiano. Obiano who is of the All Progressives Grand Alliance would also be struggling to ensure that a candidate of his party wins the elections to take over from him. APGA has for 16 years held sway in Anambra state, and being the only state in the country that it controls, Obiano would most likely throw his entire weight behind anyone elected as the candidate of the party.

Meanwhile, the Peoples Democratic Party, PDP and the All Progressives Grand Alliance, APC the most visible opposition political parties in the state would also be working to ensure that its candidates topple APGA in the election. The tendency is that some of Obiano’s projects in the state, despite the three ‘iconic’ flyover bridges in Awka may still come under criticisms. How Obiano defends his projects against opposition would to a large extend determine how the candidate of his political party in the forthcoming election would fare.