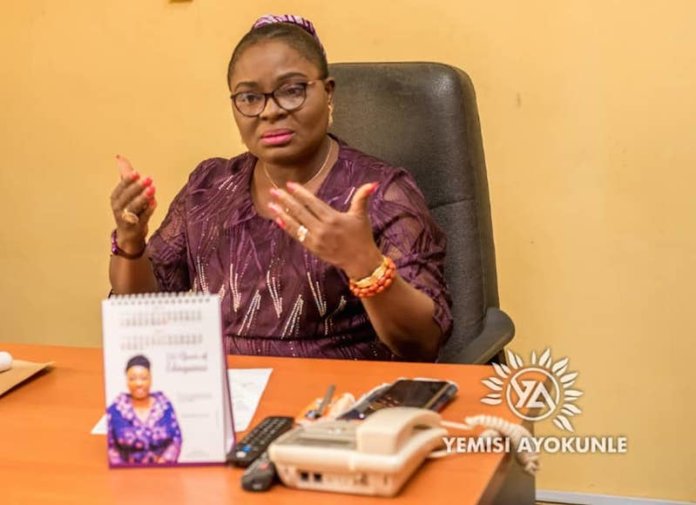 Four female legislators in the Ekiti State House of Assembly have urged Ekiti women to be valiant and resolute to make themselves relevant in politics in spite of a myriad of challenges confronting them.

The lawmakers identified cultural, sexual and economic impediments as hindrances constituting problems for women, which they said, should be surmounted for them to get prominence in politics.

They made these remarks at a training programme in Ado Ekiti on Friday. The legislators, who co-sponsored the programme, namely Yemisi Ayokunle, Teju Okunnuga, Kemi Balogun and Modupe Adelugba.

Counseling young women in politics at the programme, Ayokunle said: “Women are very relevant in politics and development of any nation.

“In any political rally, women are the most visible. We thank God that Fayemi didn’t allow women to be sidelined or their voices subjugated.

“She said Governor Kayode Fayemi and wife, Bisi had established a strong relevance for Ekiti women that would make it difficult for their successors to sideline them in the scheme of things.

“When Fayemi and the First Lady leave office, whoever takes over will recognise us, because the present administration has made us relevant. Politically, we are living in a time that sees more women than ever taking up high offices.

“The recent emergence of Dr. Ngozi Okonjo-Iweala as the Director General of the World Trade Organization (WTO), the track records of our own Erelu Bisi Fayemi at Oke-Ayoba and perhaps even our women legislators at the national and state assemblies showed that women can no longer be confined at home.

“In every rural and urban home, we have women change agents, mothers and their daughters, women who work for change with their men and communities. We must use this power judiciously to boost our relevance.”

Adelugba, another female legislator, urged women to build their economic potential, saying this remains the best way to gain political relevance and ward off all forms of abuses .

The Speaker of the Ekiti State House of Assembly, Mr Funminiyi Afuye, represented by a member representing Efon constituency, Goke Olajide, said that the assembly would continue to enact laws that would stamp out all manners of discrimination and abuses against women.

The trainer, who is a former State Director, National Directorate of Employment (NDE) in Ekiti, Mrs. Kemi Oni, advised the women to boost their entrepreneurial skills and be supportive to their husbands to earn respect at home and political fronts.

Oni said: “Don’t be too dependent on your husbands for economic survival. Build your skills in crops and animal farming, trading, cosmetology, tailoring, production and others so that you can be relevant right from the home -front for you to gain prominence in politics and governance.”

The programme tagged, “Train, Win and Lead,” was organised by the Women and Child Development Centre in the Assembly.