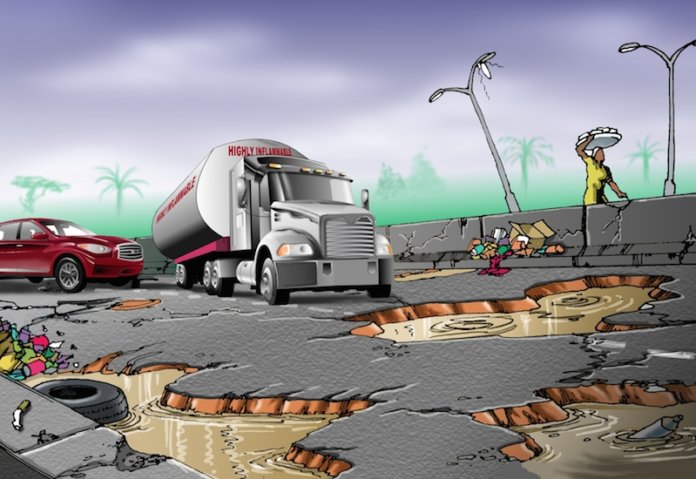 The Lagos-Badagry Highway is a metaphor for both leadership and state of infrastructure in the country. For many years, the road that connects Nigeria with members of the Economic Community of West African States (ECOWAS) has been a nightmare for commuters. Travellers along the corridor daily experience agony, spending several man-hours stuck in traffic; incurring unwarranted costs due to avoidable damage to their vehicles and perhaps developing health complications. While the federal government has neglected the highway, the Lagos State government came up with an ambitious rescue plan that has culminated in more fits than starts for more than a decade.

Constructed in 1977 by the Olusegun Obasanjo military administration to interconnect all the countries in one of Africa’s most viable economic blocs, the Lagos-Badagry express way is just about 60 kilometres in length. But today, what passes for ‘a superhighway’ linking Nigeria with Benin Republic, Togo, Ghana, Ivory Coast, Liberia and Senegal is a national disgrace at a time there is an obsession with constructing some highways that are of no economic value.

In 2009, the Lagos State government under then Governor Babatunde Fashola unveiled an ambitious plan to redevelop the highway to a 10-lane superhighway with a design to construct Light Rail Mass Transit (LRMT) in the median at a cost of $1.5 billion (N220 billion). Running from Eric More Interchange throughOrile Iganmu, Mile II, Okokomaiko, Agbara to Badagry, the project was designed with four dedicated toll lanes, two BRT lanes, 23 BRT online bus stations, seven toll link interchanges, four service lanes, seven bridges and 16 flyovers. With the support of the World Bank, the Fashola administration commenced the execution of the projects and almost fully executed the first phase of the highway project, which starts from Eric Moore Interchange and terminates at Maza-Maza Bridge.

In 2015, the Akinwunmi Ambode administration continued the execution of the second phase running from Maza-Maza to Okokomaiko awarded to China Civil Engineering Construction Company (CCECC). Between 2015 and 2019, the state government injected N12.04 billion into the highway project and N22.73 billion into the light rail project. Nevertheless, in 2016, Nigeria ran into economic turbulence which stoked a foreign exchange crisis which is still worsening by the day. That forced the Lagos State government to devise alternative funding strategies for the projects with both the Power China Corporation and Alstom SA, a French multinational. But the initiatives suffered a setback when Ambode lost his second term bid in 2019.

Amid protracted public disapproval, the federal government in 2019 took fresh initiative to rehabilitate theOkokomaiko-Badagry portion of the expressway, more than a decade after it had ceded the road to Lagos State. Under the 2020 fiscal year, the sum of N4.5 billion was set aside from the N162.55 billion sovereign Sukuk bond to do palliative works on the highway apart from N1 billion budgetary allocations. All these interventions have little positive impact given the gravity of dilapidation the road has suffered in recent years. With its current condition, the highway epitomises an ugly image of Nigeria for nationals of other West African states that travel through the trade route.

We are concerned that there appears to be a lack of synergy between the Lagos State government and the federal government regarding whose responsibility it is to complete the road. We urge both parties to set aside their differences and allow common sense to prevail. As an international gateway, the road is too strategic to be abandoned or left to the Lagos State government to handle. The federal government must intervene and very decisively. In specific terms, the two governments should urgently set up a joint commission to review the present dismal conditions of the highway, ascertain the degree of reconstruction works executed in the last decade, devise feasible reconstruction plan, come up with justifiable funding strategies and give reasonable duration within which the project will be fully executed.

What is required on the Lagos-Badagry highway is for both the federal and Lagos state governments to synergise in a bid to reconstruct the road that connects our country to the sub-region we claim to lead.

As an international gateway, the road is too strategic to be abandoned or left to the Lagos State government to handle. The federal government must intervene and very decisively