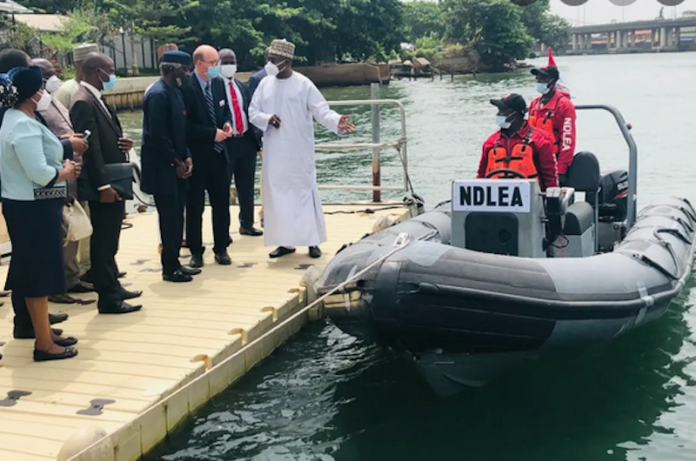 The British Deputy High Commission in Lagos, in association with the UK Border Force, Ministry of Defence (MoD) and the National Crime Agency (NCA), have donated a Rigid-Hull Inflatable Boat (RHIB) to the National Drug Law Enforcement Agency (NDLEA).

The boat was presented to the NDLEA Chairman, General Mohammad Buba Marwa, by the British Deputy High Commissioner in Lagos, Ben Llewellyn-Jones, in Lagos, recently. The US Consul General, Claire Pierangelo and the Director of Sea Ports, Omolade Faboyede were also in attendance during the handover.

The High Commission said the provision of the RHIB will greatly improve the NDLEA’s already effective capability to patrol and intercept vessels of interest and detect criminality that operates in and around the waterways surrounding Lagos. The deployment of the NDLEA patrol RHIB is expected to deter criminals and reduce maritime crime such as drug smuggling, piracy, robbery and kidnapping.

The donation was one element of the UK Border Force’s strategy to develop capacity building activity in Nigeria and an extension of the UK’s long-standing and successful cooperation with the NDLEA in the fight against organised drug crime in Africa.

The UK has been working closely with the Nigerian authorities to address the wide range of challenges of illegal criminal activity for many years.

In 2020 the UK’s working relationship with the Nigerian authorities led to the seizure of over 30 tonnes of cocaine, codeine and tramadol at Nigerian seaports, and in 2019 approximately 25 tonnes of cocaine seized in the Gulf of Guinea from vessels destined for Nigeria and neighboring West African countries.

Speaking at the unveiling event the Head of Mission at the Deputy British High Commission in Lagos Ben Llewelyn-Jones said: “Sadly, we know that Nigeria and specifically Lagos port can be both a destination point and a transit location for illegal goods and the illegal movement of people.”