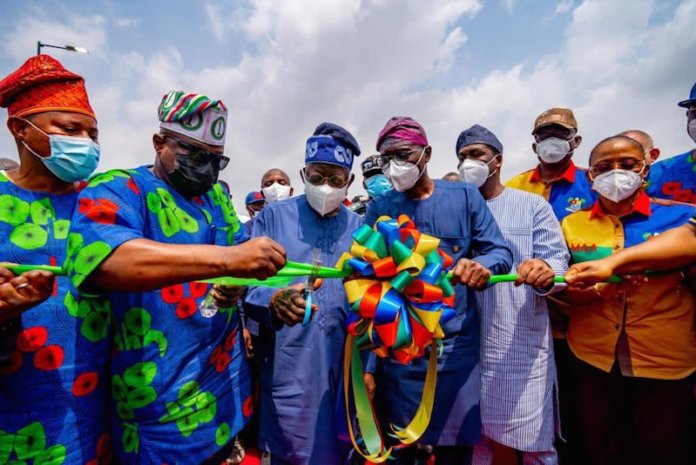 The Governor said his administration decided to continue the construction of the bridge because it was in line with the State Strategic Transport Master Plan deployed to bring immediate impactful succour and relief to commuters in the area.

**We are 648 days that we’ve been in Government. The delivery is a strong message of our resolve to deliver well articulated roads for the use of all residents in Agege and its environs

“As the Speaker (Mudashiru Obasa) said, we are now witnessing the end result of collaboration between legislative and executive arms of government.

“Let me assure all the residents of Agege and indeed Lagos, that we shall not relent but continue to provide more roads and more infrastructure for our people.

“Human benefits is of enormous interest to this government. We shall not relent but think of more benefits for entire people in Agege..

“I want to tell you that this project is for you and economic development. Take full charge and then ensure full maintenance of the entire project,” Sanwo-Olu said.

The governor urged residents to take ownership of the project saying that the delivery of the Pen Cinema Flyover which was conceived to transmit vehicular traffic across the intersections at Agege would resolve the perennial traffic gridlocks.

He added that commuters would witness improved vehicular movement and traffic flow with the attendant positive impact on businesses and living in the area.

In his remark, the All Progressives Congress National Leader, Bola Tinubu, commended the Sanwo-Olu led government for showing great commitment to develop and rebuild the state despite the COVID 19 Pandemic and other challenges.

He said the administration had shown great committment and had not let Lagosians down while making Lagos to become one giant construction site. “I say thank you for what you have been doing and for the fact that you didn’t let us down.

“Ever since Sanwo-Olu became the captain of the ship of this state, you have demonstrated good leadership that have developed, redeveloped and continue to further develop the state to benefit all Lagosians. Thank God you are building Lagos back to progress. No matter what economic adversities, you never let us down. We thank you for being who you are and what we think you are since the beginning and during the ongoing administration”, Tinubu said

Tinubu also urged the youths to embrace peace, eschew violence in order to achieve positive and sustainable development adding that destruction would not help them.

Earlier, the Speaker Lagos State House of Assembly, Mudashiru Obasa, said the completion of the project shows the collaboration and strong relationship that exist between the Legislature and the Executive adding that fifty streets had so far been tarred in the area.

In his attestation to good governance,
Chairman House Committee on Works and Infrastructure, Abiodun Tobun, said the project was going to improve the economic and well being of the area adding that the credibility of the contractor was not in doubt.

In her address, the Special Adviser to the governor on Works and Infrastructure, Aramide Adeyoye, said it was another sustainable road infrastructure investment and development effort of Governor Sanwo -Olu’s administration in line with the THEMES agenda to support businesses, promote development and ultimately improve the social economic well-being of Lagosians.

Adeyoye stated that the project which include the rehabilitation of five adjoining roads would provide solution to the traffic and transportation problem in the state, stressing that it would also change the skyline of the area and ease traffic gridlock tremendously.

Sanwo-Olu said the Bridge, which spans the intersections of Old Abeokuta Road, Railway Crossing Corridor and Iju-Ishaga Road and terminates near the entrance gate of Ijaiye Low Cost Housing Estate along Oba-Ogunji Road, was designed to convey traffic from Oba-Ogunji Road into Old Abeokuta towards Abule Egba through the ramp across Railway Corridor.

The project which was an initiative of the Governor Akinwunmi Ambode administration was to be commissioned last year but for the Covid 19 pandemic.