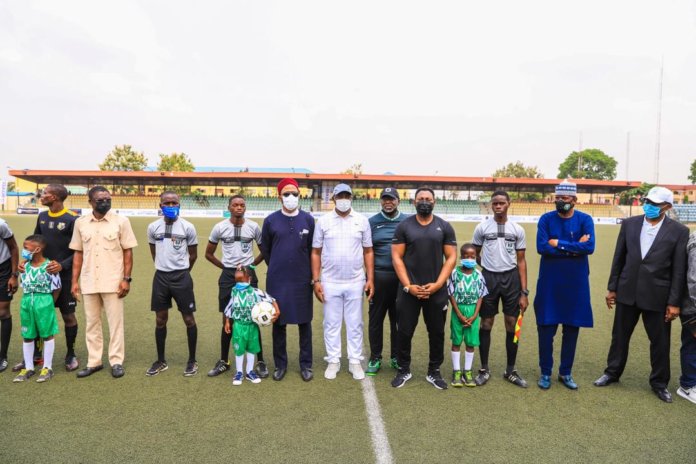 The Minister of Youth and Sports, Sunday Dare, at the weekend declared that the revived National Principals’ Cup has come to stay this time to boost the development of football in Nigeria.

The competition is a developmental grassroots event for all secondary schools in the country.

Dare was speaking at the kick-off ceremony of the Principals’ Cup on Friday at the Agege Stadium in Lagos when Igbobi College played the opening match of the competition against Government College, Kaduna.

The minister said: “I am so elated that a competition like this which engages our youths and prepares them for the future is back.

“When you look at at the likes of Segun Odegbami, Felix Owolabi, Daniel Amokachi, Adokiye Amiesimaka, Stephen Keshi, Dosu Joseph, Henry Nwosu, Victor Ikpeba and a whole lot of others who took part in this event, one will realize the magnitude of this big revival.

“I want to assure everyone that this competition will outlive all of us and will not go down again. It will be a brand with sponsors in place so that it will be sustained in many years to come.

“It is important to use this event to boost the age grade national teams and to give the young ones a chance to attain their full potential,” stressed the sports minister.

Deputy Governor of Edo State, Philip Shaibu, Minister of State for Education, Emeka Nwajuba, the first and second Vice Presidents of the Nigeria Football Federation – Seyi Akinwunmi and Shehu Dikko – represented the federation at the event.

Dare also enjoined the participants of the competition to combine education effectively with sports.

“Today, Adokiye is a Justice, Odegbami an engineer, Owolabi, a Ph.D holder and a host lot of others. Football did not affect their education,” Dare concluded.