A Narrative Full of Worthy Lessons 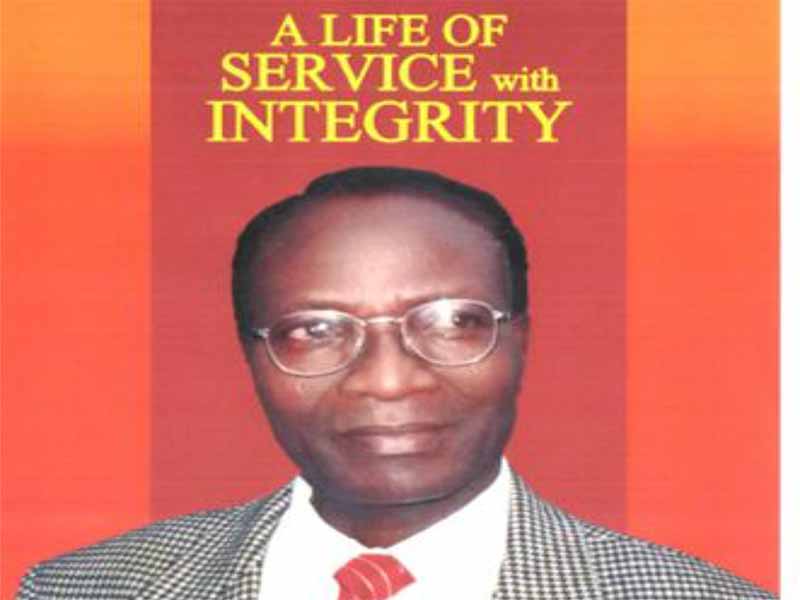 BOOK REVIEW
Bukar Usman
A Life of Service with Integrity is autobiography of Dr. Abraham Aderemi Alo, FCIB, a former student of King’s College, Lagos, our alma mater. Dr Alo born in 1937 was at King’s College from 1953 to 1959 while I attended the same college from 1964 to 1965.

I could not, therefore, resist the temptation to read the product of the octogenarian. The foregoing is my brief account of my take away from the book which I wish to share for the valuable lessons contained therein.

It is remarked that Dr Alo has an “inviting handwriting and good command of English” (p.146). As the script is not handwritten, I could not attest to the attractiveness of Dr Alo’s handwriting. However, the book’s narrative as published bears sufficient testimony to Dr Alo’s good command of English. In the 232-page book, he vividly narrated his parental background rooted in Ilesha, Osun State, his schooling, sporting careers and capped all with a detailed narrative of his challenging working life across the country and post-retirement social activities.

One learns that the book was written primarily as a legacy and also as a special present to his beloved wife a “priceless jewel” as he turned 80 in 2017 and to the present and coming generations (p.v). Lady Victoria Idowu Alo whom he courted for nine years and who holds MSc (Banking and Finance) has had a 36-year distinguished banking career rising to managerial status before retirement in 2001(p.36) and has been a caring life partner to Dr Alo. In addition to that, the couple is blessed with four healthy and talented children (p.92). Thus, assured of a comfortable home-front, Dr Alo confidently and competently faced the challenges of his working place and social activities.

Although Dr Alo’s parents had no formal Western education, they were deeply religious and hence imbibed in him sound Christian values (pp.10-11). The values which include simplicity, contentment, honesty, hard work, abiding trust in God and service with honour and integrity (p.viii) had guided him to excel and overcome the challenges he encountered and won laurels in academic and sporting activities at school and national levels. An avid reader, he never took second position in academic work (p.18).

One of his regrets in sports and in hockey in particular was his failure to attract synthetic turfs in vogue overseas to Nigeria to promote competitive hockey tournaments in and outside the country. He expressed grave disappointment at his inability to attract the necessary support from the stakeholders locally and overseas (p.85).

Dr Alo acknowledges the valuable guidance he got from a “faithful friend” in the person of Mr PH Davis, the erstwhile expatriate Principal of King’s College, Lagos and later Federal Government Colleges, Sokoto and Warri (pp.24 and 33). Here, I hasten to corroborate the good natured-attribute of Mr Davis who when I lost my box on my road journey from Maiduguri to Lagos in 1964 and narrated to him my loss when I reached the college, he promptly and sympathetically gave me a strong leather box in replacement. And even after he was deployed to the Ministry as Federal Adviser on Secondary Education to make room for the Nigerian Dr R.E.O Akpofure who took over from him as Principal King’s College, he maintained a fatherly disposition towards me. He confided in me that he did not quite like the exalted position of Adviser. He preferred the Principal post. He got his wish when he was posted to Federal Government Colleges Sokoto and later Warri as the foundation Principal of both colleges.

Dr Alo became the pioneer executive secretary of the Nigerian Corporation of Insurance Brokers (NCIB) in 1992. His post was pivotal to the development of insurance brokerage business in Nigeria anchored on service with integrity. He emphasised that “insurance broking is integrity and, ends when integrity ends” (p.167). Under his tenure, NCIB was able to own a secretariat building and got the government to enact a charter to govern insurance brokerage business in Nigeria.
Chapter 6 (pp71-123) which occupies the largest chunk of the 232-page book, embodies nearly all that one needs to know about the initial challenges faced in the development of insurance broking business in Nigeria and the pivotal role played by Dr Alo who anchored at the secretariat served under no less than ten out of the 16 presidents of the NCIB at the time of his retirement.

Dr Alo’s autobiography is inundated with several worthy lessons and guidance on service with integrity to God and mankind, and absolute trust in God. Among them are that as he proudly took his new car from Lagos to his hometown Ilesa, his father refused to bless it, saying he should first bring £75 to buy a land and become a landlord with an asset that appreciates in value (p.15). Dr. Alo further stated that one should always be honest and have trust in God and remember that destiny can never be changed (p.31); that secret of living is serving and giving (p.71); that all need not be literate or academically decorated to serve (p.71) and that the greatest use of life is to spend it for something that will outlast it (p.73).
As I read along, I gathered more wise sayings which said that God does not give you any assignment without the tools to pull you through (p.129); and that the focal point of the autobiography is deep gratitude to God for His protection and grace (p.144). Dr. Alo stated this with a narration of his life experience whereby he survived two ghastly motor accidents and escaped mob attacks.

Not yet done on his emphasis on values, Dr. Alo stated that one should see the world as a temporary abode and regard service with Integrity to God and mankind as enduring legacies (p.149); that the final word in living is service with integrity (P.150); and that Nigeria requires ethically sound leaders who will serve with integrity and patriotic followers too who would abide by the values of good citizenship prescribed in the National Pledge (p.151).
Dr. Alo further admonished that one should engrave principles of selfless service to humanity so no time can efface (p.210); that people without past are without future (p. 226); that if you have, give; if you lack, give-to reap more than you sow (p.231); that the river that forgets its source will sooner than later dry up (p. 231); and that permanent happiness lies in giving (p.231).

The book ends with a profuse invocation to God to make us instruments of healing for the injured, and of His hope for the despaired and of His joy for the needy (p. 232).
Remarkably, the values of service, integrity, honesty, contentment, hardworking and giving among others, are recurring decimals in Dr Alo’s narratives and admonitions to his fellow beings. These confirm the values deeply ingrained in him right from his childhood which he endeavoured to practice and preach as he matured in life to this day @83+.