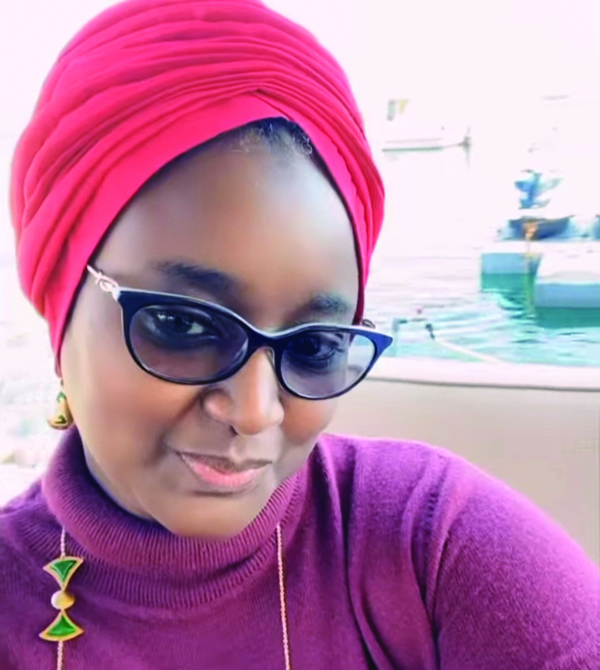 The lingering marital face-off between Rahma Indimi and Mohammed Babangida over the custody of their four kids may be over. Rahma now legally has custody of the kids. Ferdinand Ekechukwu reports

Mohammad Babangida had shortly after their marriage crises began in 2016, initiated custody battle to reunite his children and cut-off every trace of Rahma Indimi from their lives. Recall that the almost 14-year-old marriage between Mohammed and his first wife/mother of his four children, Rahama, had crashed irredeemably in 2016. Rahma is the daughter to Mohammed Indimi, a Maiduguri-based billionaire and oil magnate.

Mohammed, on the other hand, is the first son of Ibrahim Babangida, former Nigeria’s head of state. The estranged couple however was in the news days earlier due to Rahma’s post that there can be peace between couples even after a divorce. The mother of four stated this, two days after she celebrated her recent victory in court. According to Rahma, she was sued three times by her ex-husband, Mohammed Babangida, for custody of their children and she won.

“My ex-husband took me to court for custody. I won. Alhamdulliah. 3rd time,” she said responding to a poser from an Instagram user. Taking to her story, she then shared a comment she made on the platform, thanking everyone for their support and advised divorcees to sue for the sake of their children. “Thank you so much. I really appreciate the support. People need to understand that there is peace after divorce. Not everything is a fight.

“Yes, when you marry another, I understand they instigate a lot of issues between the divorcee only for their own selfish interests not to give any room for reconciliation between them. Men/women, there can be peace and tolerance ooo. Do everything you can for the kids’ sake. Simple. Do not fight, just get along. Drop the hatred and animosity. Let peace reign jorrr.”

She further shared footage showing the moment she got news that she won her court case.
Their marital face-off had taken them to seven different courts between Minna, Niger State and Abuja over the custody of the four kids they had together. Her post had also revealed that in addition to the reconciliation, she has a fiancé: “Allah is wonderful. The moment I got the best news in my life and I didn’t even know @dolcesheriff captured it on camera. Yessss ooooo after years in court, I won my case again and again. Alhamdullilah. 2021 is a good year. Reconciliation, winning my case and a wonderful fiancé that dots on me. Alhamdullilah ya Allah. Ya Allah, please continue to bless me.

While the union has so far endured a tumultuous ride, the couple, however, appeared to have buried the hatchet last year after Rahma revealed that they are cordially co-parenting their kids. Earlier in February, Rahma celebrated Mohammed on his 48th birthday with a terse post wherein she described Mohammed as her “one and only baby daddy.”

“Happy birthday to my one and only baby daddy. . . Wishing you the best in everything that you do,” she wrote. In another post, she also shared a photo of a beautiful cake made for Mohammed with photos of her and their children on it. “Happy birthday to our one and only. May Allah always protect you and may Allah always be there for you,” she added. At the height of their face-off, the duo had gone to court over who should have custody of their four children.

Sometime in November 2018, Rahama had taken to social media to accuse Mohammad of using money to secure full custody of their children. Rahma had initially taken custody of their two eldest kids, Maryam and Ibrahim. While their eldest kids were with her, Mohammed took the custody battle to a Sharia Court in Minna, Niger state. The Court then ordered Rahma to hand over the two children to their father, pending the determination of a substantive suit.

A source had alleged she decided to flout the court order concerning her children’s custody: “If the truth be told, Rahama is all out to drag her former husband and his family’s name in the mud. . . The kids have been with their father even since she moved out of the family home in Minna about four years ago. Despite all these, Mohammed still ensured that the family came together during vacation through holiday trips abroad. After the last one, she refused to allow the kids come back to Minna.

“Mohammed had allowed the kids to wait with her after the trip. She had to be cajoled into coming to Minna before the kids were returned to school. At that point, efforts were made to ensure that she was placated with gifts and money. Unknown to Mohammed, she only took a break. When during the long vacation, the kids went to her again for another holiday she refused to release them for school, for the second time. Even when the Sharia Court decided the children should be returned to their father so that the status quo is maintained, she refused it.”

At first, Rahma, who had her kids taken from her following the faceoff and separation from Mohammed, swore she would continue to fight till her last breath. In a swift reaction, Rahama took to the social media, insisting that her ex manipulated the Sharia court to get custody of their kids: “Well, I won my case in Minna last year. But victory was short-lived when Mohammed Babangida refused to accept his defeat. He brought his personal Judge to hear the matter again in the same court, instead of going to the Sharia Court of Appeal.

“I’m thinking since I’m done in Minna, I can finally move on with my life. Unfortunately, the case was re-listed. I told the court I’m not interested in doing the case. Lo and behold, the Judge forced me to be the plaintiff. My lawyer said we are still not interested in the case. Fine, I’m forced to do a case that I know they have no jurisdiction over, against my will. Long story short, the judge said I’m not truthful because I have no marriage certificate. What does customary law have to do with Sharia Law?

“This man changed the Sharia Law to fit his client. He gave him exclusive custody of all the four kids. Mind you, Sharia gives my mum custody if I’m unfit to mother my children. Even the two that are not within jurisdiction. Hey may God help our judiciary. Money talks and b””” shit works. I will continue to fight till my last breadth. Allah Kareem, Allah Wakil.”
She had taken Mohammed to seven other courts during this period over the same matter – Sharia Court in Minna, Sharia Court of Appeal, Minna, High Court, Minna Area Court, Abuja Upper Sharia Court, Abuja High Court Abuja and Court of Appeal, Abuja. She proceeded with a petition sent to President Muhammadu Buhari, the National Assembly, Inspector General of Police (IGP), Director DSS, the Sultan of Sokoto, Supreme Council of Sharia in Nigeria, National Human Rights Commission and the President, Nigerian Bar Association, alleging numerous acts of arbitrary abuse of power and privileges by Mohammed. She eventually got approval to keep her kids.

Growing up, Mohammed’s first love was actually Umma, the daughter of Ambassador Aminu Wali, the former Nigerian Envoy to the United States of America. Like it is in aristocratic families, where matchmaking is the norm, Rahma was married to Mohammed with a view to cementing the relationship between the two influential families. But Umma was the woman who made his heart to flutter. His heart and thoughts remained with her. Thus when Mohammed announced, four years into his marriage with Rahma, that he would be taking a second wife, it was hardly surprising to his family and friends who knew he still held a torch for his first love, Umma.

Mohammed’s decision was said to have been supported by his super rich family whose wealth and contacts had earned them a pride of place among the world’s privileged aristocrats. Being the heir apparent to the Babangida dynasty, the family left no stone unturned to ensure the marriage was a grand affair in April 2008, when Mohammed got married to Umma at an elaborate ceremony which spanned several days in Kano and Minna.

Consequently upon his second marriage, Rahama, moved out of her once cherished matrimonial home. Reason prevailed in 2010 after some months of initial grandstanding with Rahama returning after pleas from family members. Before he took Umma as his second wife, Mohammed, who is fondly called Moha by his friends and admirers, had faced a stiff opposition from Rahama. She was aggrieved with her husband’s decision to take a second wife. She was said to have felt crushed with the prospect of sharing Mohammed with another woman. And this must have fueled the bitterness she felt towards Umma for usurping her in the life of Moha.

After 14 years of roller-coaster marital life, Rahma, who owns Deva Petals and Fashion Cafe, a luxury fashion platform in Abuja, announced in July 2016 her final split with Mohammed. Prior to that decision, efforts by the two influential families, Babangida and Indimi, to rein in on the couple failed as the two could not reach a common ground for love sake.