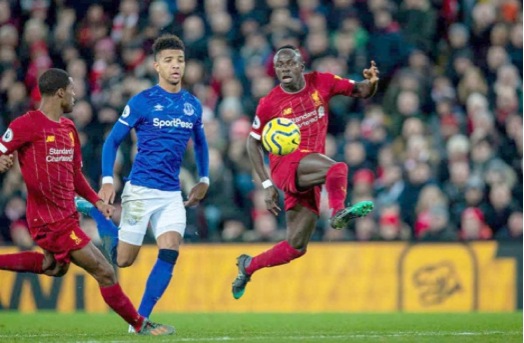 Everton will be hoping to end an 21-year winless streak at Anfield as they take on Liverpool. The last time the Toffeees recorded a win at the Reds’ home ground was in the 1999/2000 Premier League season and Carlo Ancelotti would be craving to end this uneviable record today

Merseyside rivals, Liverpool and Everton lock horns for the 289th time this afternoon, with just one place and three points separating the two sides in the Premier League table. The champions have plummeted to sixth place following a dramatic dip in form over the past two months, giving their neighbours from across Stanley Park the chance to move level on points with them this weekend if they can end their long Anfield hoodoo.

The scale of Liverpool’s demise over recent weeks is beginning to be laid bare in the Premier League table, where the champions currently sit in sixth place and now a whopping 16 points adrift of runaway leaders Manchester City.
It was less than two months ago that Jurgen Klopp’s side sat top of the Premier League, so to now be in a position where the manager has publicly conceded the title is in indication of just how bad their domestic form has been of late.

The Reds have won just two of their eight top-flight outings so far this calendar year and have lost five of those – incredibly already suffering as many league defeats in 2021 as they did from 72 matches in both 2019 and 2020 combined.
That includes defeats in each of their last three matches – against Brighton & Hove Albion, Manchester City and Leicester City and another loss on today would see them lose four on the bounce for the first time since December 2002.

The most recent two defeats have seen them ship seven goals too – as many as they had let in in their previous 10 games and their overall tally of goals conceded is now 32 from 24 outings, just one fewer than they let in throughout their entire title-winning campaign.

Klopp will no doubt be scratching his head as to why there has been such a marked downturn in results, but perhaps the most baffling aspect of their recent poor form has been their home record.
After going 68 league games without defeat at Anfield, the second-longest unbeaten run of its kind in English top-flight history, Liverpool have now lost their last three and are winless in their last five.

Indeed, it is now more than two months since the Reds won a game on home turf, and you have to go back to 1923 for the only previous time Liverpool have ever lost four consecutive home league games in any division.
Everton themselves were the last reigning top-flight champion to suffer that fate way back in 1928-29, which gives a stark illustration of just how poor Liverpool’s form has been at home especially.

Despite that, it will not be all doom and gloom for Klopp and his players ahead of the visit of Everton, and they offered a reminder of what they can do during Tuesday night’s impressive Champions League win over RB Leipzig.
Goals from Mohamed Salah and Sadio Mane saw off a Leipzig side that was in good form and flying high in the Bundesliga, notching two away goals without reply in Budapest to put one foot in the quarter-finals of the competition.

By Klopp’s own admission, the Champions League provides Liverpool’s last realistic route to silverware this season and so giving themselves a good lead to protect in the reverse fixture will have lifted a weight off the manager’s shoulders.
There is still plenty of work to be done to ensure Liverpool’s place in the competition again next season, with the Reds now two points adrift of fourth-placed Chelsea, but Klopp will also take encouragement from their recent league performances despite the unsatisfactory results.

The champions controlled the vast majority of the game against Leicester before their costly collapse, and were also every bit a match for Manchester City prior to another collapse.
On both occasions it was individual errors which were most to blame for Liverpool letting points slip, and Klopp will be confident that his side will return to winning ways sooner rather than later if they can cut those uncharacteristic mistakes out.

There is every reason for him to believe that the return to winning ways domestically will come this weekend too, with Everton enduring their worst ever run against their local rivals.
It is now over a decade since the Toffees claimed Merseyside derby bragging rights and they still have not won at Anfield this century, last doing so in 1999.

In more recent history, Everton also come into this match in poor Premier League form and are one of only three teams to have picked up fewer points than Liverpool over the past six games.
That statistic perhaps does not paint the full picture, with Carlo Ancelotti’s side sharing the spoils with Leicester, earning a dramatic 3-3 draw at Manchester United and winning at Leeds United in that time, but in terms of points on the board it is now just five from the last 18 on offer.

Carlo Ancelotti – Manager, Everton – Latest news, biographical informati…
News about Carlo Ancelotti – Manager, Everton – Latest news, biographical information, pictures and more.
The Toffees make the short trip to Anfield off the back of successive defeats to teams at opposite ends of the table, first losing to Fulham last weekend and then succumbing to the Manchester City juggernaut on Wednesday.
The encouraging news ahead of this game is that those defeats both came at home, where Everton have now picked up only one point from five games since the turn of the year.

It is a completely different story away from home, where Everton have amassed 17 points from a possible 21 in a seven-game run that stretches back to the beginning of November.
March 2016 was the last time they enjoyed a longer unbeaten streak away from home in the top flight, while only the league’s top three have picked up more points on their travels throughout 2020-21 so far.

That said, even accounting for Liverpool’s recent troubles at home, Manchester City are still the only team that can better their home points haul this season, and their record against Everton at Anfield cannot be ignored.
Liverpool will know that another defeat today would be a huge blow to their top-four hopes, whereas Everton have the tantalising prospect of moving level with their hosts having played a game fewer, as well as keeping their own Ch ampions League ambitions alive.