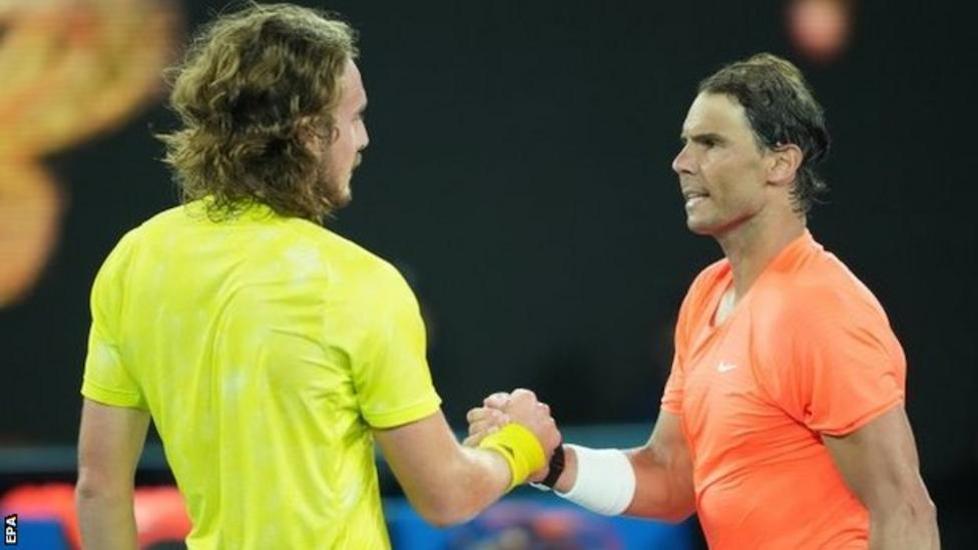 Tsitsipas, 22, broke out into a huge smile, almost in disbelief, after converting his third match point.

Fourth seed Medvedev beat compatriot Andrey Rublev to reach the last four at the Australian Open for the first time.

The 25-year-old won 7-5 6-3 6-2 as his childhood friend Rublev, who was seeded seventh, struggled in the 29C temperatures at Melbourne Park.

ATP Finals champion Medvedev now puts a 19-match unbeaten streak on the line against Tsitsipas, who needed over four hours to overcome Nadal.

“I’m speechless, I have no words to describe what just happened on court,” said Tsitsipas, who was still out of breath in his on-court interview.

“My tennis speaks for itself. It is an unbelievable feeling to fight at such a level and give it my all on the court.

“I started very nervous, I won’t lie. I don’t know what happened after the third set. I flew like a little bird.

“Everything worked for me and the feelings are indescribable.”

Few would have predicted this outcome between Tsitsipas and Nadal going into the match – and even fewer after the opening two sets.

Tsitsipas looked befuddled by Nadal’s presence, clean-hitting and court-craft, with 20 unforced errors coming off the Greek’s racquet to put the Spaniard in command.

The pair met two years ago in Melbourne when Nadal allowed Tsitsipas just six games in a one-sided semi-final.

After that match, a despondent Tsitsipas talked about how Nadal had a unique “talent” of making his opponents “play bad”.

Initially, it appeared to be a case of deja vu. This time, however, Tsitsipas remained composed and dragged Nadal into a physical battle which proved beyond him.