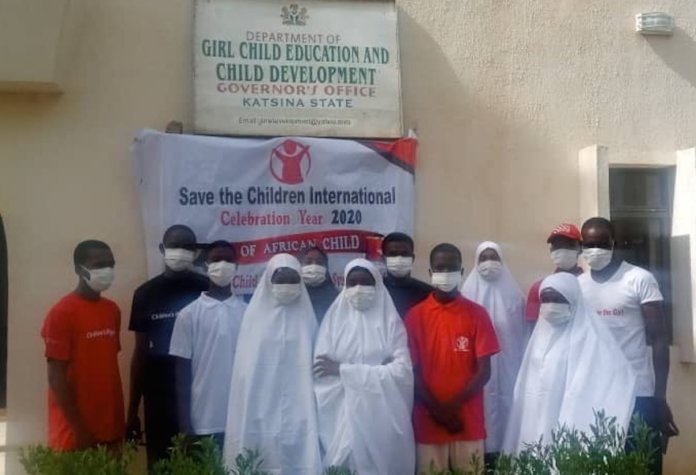 In 1989, world leaders made a historic commitment to the world’s children by adopting the United Nations Convention on the Rights of the Child, which is an international agreement on childhood across the globe.

The Convention says childhood is separate from adulthood, and lasts until 18. It is a special, protected time, in which children must be allowed to grow, learn, develop and flourish with dignity in line with relevant laws that protects them.

In Nigeria, the Act was passed into law in 2003 by former President Olusegun Obansanjo as the Children’s Rights Act (CRC) 2003, in large part because of the media pressure that national stakeholders and international organisations put on the National Assembly.

Article 3 of CRC states that “In all actions concerning children, whether undertaken by public or private social welfare institutions, courts of law, administrative authorities or legislative bodies, the best interests of the child shall be a primary consideration”.

Following the adoption of the Act in Nigeria, child marriage became illegal and the minimum age of marriage increased to 18 in the country. Though the legislation was put in place by the federal government, states are meant to adopt and pass the Act.

Despite the domestication of the Act at the national level, investigation revealed that Bauchi, Yobe, Sokoto, Adamawa, Borno, Zamfara, Gombe, Kebbi, Jigawa and Kano States are still battling with relevant stakeholders to ensure the passage of the act into law.

But in Katsina State, a non-governmental organisation (NGO), Save the Children International (SCI), has facilitated the passage of the Act in order to tackle deteriorating cases of child marriage, rape, labour and other impediments bedevilling the state, particularly in rural areas.

The non-profitable organisation believes that one of the remedies to end child marriage and other heinous crimes afflicting children in the state, is to domesticate the Act and increase the enrollment of girls for primary education, ensure retention and their transition to secondary school.

Accordingly, the organisation is working in Rimi and Sandamu Local Government Areas of the state with an average of 11 wards each, targeting no fewer than 33,000 married and unmarried adolescent boys and girls to address gender inequalities and improve their sexual and reproductive health services.

SCI, through its projects, REACH – Reaching and Empowering Adolescents to make informed Choices for their Health and Better Life for Girls, has impacted positively on the lives of young girls and boys in the state by empowering and educating them on their civic rights.

The organisation ensured the passage of the Child Right Act through frequent advocacy meetings with the state Governor, Alhaji Aminu Bello Masari and members of the State House of Assembly. It equally engaged traditional and religious leaders across the state on the need for its passage.

THISDAY reliably gathered that the Act was presented by the executive to the State House of Assembly in 2003 during late Umaru Musa Yar’Adua-led administration in the state as Child Right Act but the then lawmakers after series of deliberations, changed the name to Child Protection Bill.

The bill, which scaled the first and second reading was not passed into law due to criticism on its content by prominent Islamic scholars, parents and other critical stakeholders, including some top government officials and it was later declared missing by the lawmakers.

However, after pressure from Save the Children International through its Community Engagement and Advocacy Coordinator, Mrs Murjanatu Kabir, the bill was resubmitted to the current sixth Assembly by Governor Masari on March 3, 2020.

After the resubmission of the Child Protection Bill by the state government to the Assembly and subsequent agitation for its immediate passage by SCI, the lawmakers unanimously passed it into law on November 26, 2020.

Musa Nuhu, who chaired a nine-man committee inaugurated by the Speaker of the House, Hon. Tasi’u Musa Maigari for the passage of the hitherto bill, while presenting the recommendations of the committee during plenary, canvassed for the immediate passage of the bill into law to end the prevailing cases of rape, child marriage and child labour in the state.

Nuhu, who is the member representing Kaita, during the plenary, told his colleagues that all misconceptions attached to the bill have been tackled, adding that the bill provides the opportunity for the protection of children’s rights and better welfare packages for them.

He explained that the bill also seeks to address the menace of drug abuse, underaged marriage, same-sex marriage and other social vices bedevilling children, particularly teenage girls in the state, adding that government at all levels has the task of ensuring that the rights of children are placed on top priority of their agenda for proper development.

Meanwhile, after hours of deliberations and counterarguments on the committee’s report, the lawmakers unanimously passed the controversial Child Protection bill into law and a clean copy was forwarded to Governor Masari where he signed it into law on December 24, 2020.

Although, the law did not specify age limit for marriage in the case of a Muslim child, but it emphasised that any person who marries, betroths or promote child marriage in the state without the consent of the child’s parents commits an offence that is liable on conviction to a fine of N200,000 or imprisonment for a term of two years as enshrined in part IV, section 1 and 2 of the law.

Also, Part III, section 13 subsection (1) of the law States, “Every child has the right to free, compulsory and universal basic education and it shall be the duty of the State to provide such education”. While in section 3 of the same part III, the law made it mandatory for parents to ensure that their children attend and complete primary and secondary schools before marriage.

The law further stated that a child who becomes pregnant under special circumstances before completing her education shall be given the opportunity after delivery to continue on the basis of individual or parents’ ability. Therefore, there is need for parents not to discriminate a child who got pregnant while in school, but work towards the completion of her education after given birth.

Consequently, any parent or person who has the care and custody of a child and fails to educate or provide the basic humanitarian needs for the child, commit an offence punishable under Part IV subsection (3) of the law. And such offenders will be convicted to pay N5,000 or serve a jail term of one month, while subsequent convictions attracts a fine of N10,000 or two months imprisonment.

Part IV, section 24 subsection (2) of the law, equally spelt out punishment for rapists. It stated that: “Whoever sexually harass a child is guilty of an offence and shall be liable on conviction to a term of imprisonment not exceeding 10 years and a fine of not less than N200,000”.

To avert contempt of court, the law banned members of the public from publishing name, address, school, photograph or anything likely to lead to the identification of a child whose matter is before the court, “except in so far as required or permitted” by the provisions of the law.

With the passage of the bill into law, what is left for state government, parents, traditional and religious leaders and security agencies is to adopt workable and revolving mechanism for the implementation or enforcement of the law in the state, particularly in villages where cases of rape and child marriage are rampant.

It is, however, worrisome to note that the Katsina State Police Command during its press conference said it has recorded 287 cases of rape and 22 sodomy cases in 2020, while 236 cases are undergoing investigation and most of the victims are between the age of three and 14.

Apparently miffed by the statistics of rape cases released by the command, Save the Children International at a five-day capacity building training for journalists in Kano, said it has become imperative for the state government and relevant security agencies to support the police in order to implement the law.

Mrs Murjanatu Kabir, who disclosed this during the training, which drew journalists from Katsina, Gombe and Abuja, said the implementation of the law would tackle the pervading cases of rape and child marriage bedevilling children in the state.

In her presentation christened, “Katsina Updates”, Kabir said although the state Governor, Aminu Bello Masari, had assented to the Child Protection Bill into Law, but more needs to be done in curtailing the upsurge in violence, sexual abuse and other challenges militating against children’s education in the state.

She said: “In Katsina, the governor has signed the Child Protection Bill into Law after several years of struggle. What is left now is the implementation. So, we are calling on relevant stakeholders, including the media to work towards its implementation in order to end issues of rape, out-of-school children and child marriage.”