Corps Member, One Other Jailed in Kwara over Love Scam 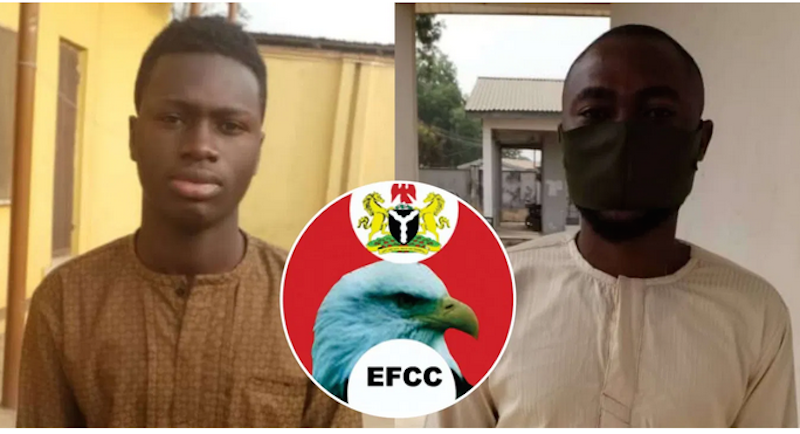 A member of the National Youth Service Corps (NYSC), Mr. Sam Abiola and one Adebiyi Sodiq have been convicted by a Kwara State High Court over attempted cheating and love scam.

The affected suspects were arraigned before the court by the Ilorin Zonal Office of the Economic and Financial Crimes Commission, (EFCC).

Abiola, 26, who is currently doing his compulsory national youth service programme in Kogi State, and Sodiq, 18, were arraigned on separate charges contrary to 321 of the Penal Code Law and punishable under Section 324 of the same law.

While one count was preferred against Abiola, Sodiq was prosecuted on a four-count charge. They pleaded guilty to the charges.

The charge against Abiola reads: “That you, Sam Abiola (Missie Bonie), sometime between July 2019 and September 2019, in Ilorin, within the jurisdiction of this honourable court, did cheat by impersonation when you pretended to be one Missie Bonie, a white female with Gmail account, missiebo271@gmail.com, and fraudulently deceived one Rick to send $550 to you through gift card after you made him believe you were in love with him, thereby committing an offence contrary to Section 321 of the Penal Code and punishable under Section 324 of the same Penal Code.”

For Sodiq, count three of his charge reads: “That you, Adebiyi Sodiq (alias: Maria Monica), sometime in August 2020, in Ilorin, within the jurisdiction of this honourable court, did cheat by impersonation via your email address; terrellwhite856@gmail.com, to one Manny, by portraying yourself as a white female, named Maria, and induced him to send you his Cash App, a representation you knew to be false, thereby committing an offence contrary to Section 324 of the Penal Code and punishable under the same Section of 324 of the same
law.”

The EFCC had last week reviewed the facts of the case after the defendants pleaded guilty to their separate charges, following which it urged the court to convict them based on their pleas and the evidence placed before it. But, the court adjourned till today for judgment.

In a similar fashion, the judge sentenced Sodiq to six months imprisonment on each of counts 1,2,3 and 4 with N100,000 (One Hundred Thousand Naira) as option of fine on each of the counts.

The judge ordered that the convict’s phones and laptop used as instruments to perpetrate the crime be forfeited to the Federal Government of Nigeria.