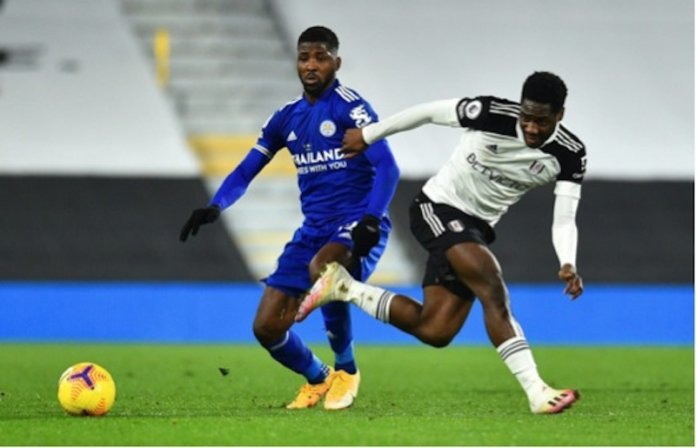 After an unimpressive start to the season culminating to a proposed move away from King Power Stadium, his performance midweek may have erased his past ‘sins’ as his coach, teammates and analysts heaped praises on him. Kelechi Iheanacho on Wednesday solidified Leicester City’s first-four target after his goal helped the Foxes to third position of the Premier League and Manager Brendan Rodgers was not economical in his praise for the Nigerian

After putting up a Man of the Match performance and even shot Leicester City into the lead in the Foxes 2-0 win over Fulham, Nigerian international, Kelechi Iheanacho has been enjoying praises from his Manager Brendan Rodgers, teammates and analysts.

Iheanacho’s 17th minute strike helped Leicester to a third place in the Premier League table and inching them closer to their first-four target in the league.
It was Iheanacho’s first league goal of the campaign and he almost doubled his side’s lead in the 25th minute when he dribbled his way into Fulham’s defence but failed to direct his shot on target.
The 24-year-old was handed his third league start of the season, spearheading the Foxes attack in the absence of Jamie Vardy.

The Nigerian international made the most of the opportunity to open his account in the English top-flight this term and helped the Foxes return to winning ways after suffering a defeat against Leeds United last time out.
Leicester City manager Brendan Rodgers said that he and the players were happy to see Iheanacho end his Premier League goal drought in a 2-0 win against Fulham on Wednesday evening.

Since scoring in the 49th minute against Crystal Palace on July 4, 2020, the Nigerian international hadn’t put the ball in the back of the net, failing to score in 14 consecutive matches.

“I thought it was an excellent win,” Rodgers said after the game.
“You only need to look at Fulham’s record, how hard they have been to beat, especially against big teams.
“We scored two goals of great quality. The first one we won the ball back and it’s a brilliant cross. We’re delighted for Kels.

“The second was a different type, with good possession, played quickly, and then there’s the left-back getting up there to support with good energy.”
Speaking on Premier League Productions at half-time, former Manchester United midfielder Owen Hargreaves praised Iheanacho for his goal and secondary assist.

Hargreaves said : “What a ball from James Maddison, he puts it on a plate for Iheanacho. To be fair, Iheanacho adjusts absolutely brilliantly.”
On Justin’s goal, the former England international added: “This goal is a dream, Iheanacho with a lovely turn and then the rest of it is a dream.”

Meanwhile, Match of the Day pundit Micah Richards insists Iheanacho is better finisher than his goalscoring record at Leicester City suggests.
Richards believes he has plenty to offer if given a regular run of games.
“Yeah, he came as a young kid at Man City and the first thing I realised about him was how good his touch was,” said Richards.

“You could fire the ball in and he has great close control and he was left footed.
“He’s a better finisher than his record at Leicester suggests. I knew he was something special, and I want to see him kick onto the next level now.

“He’s got the chance with Vardy out, but to replace Vardy is always going to be difficult.”
Fellow Match of the Day pundit Danny Murphy is surprised Iheanacho has not figured more amid Vardy’s injury absence.
“I’ve been surprised he hasn’t started more while Vardy has been out,” said Murphy.

“I’ve always liked him, he’s more of a goalscorer in the number nine role than Perez, for me. I know he missed the penalty at Palace, but even more reason to leave him in there and give him time to get over that.
“When he’s at it, he’s a handful, he’s got good game intelligence, he knows when to go in behind and drive on goal. With Maddison playing as a 10, they link really nicely.”

Continuing, Rodgers revealed Iheanacho remained a key member of his team.
The Nigerian international has delivered impressive showings in the few games he was afforded in the 2020-21 campaign.

Iheanacho has made 19 appearances across all competitions this season, involving eight starts, scoring three goals and providing four assists.

Rodgers has praised the performances of Iheanacho and looks forward to seeing him make more impact for the club in the second half of the season.

“The role he has been in, he’s done very well in. It’s difficult for any striker when you play with one up front, you need guys who are going to be loyal,” Rodgers said in a press conference.