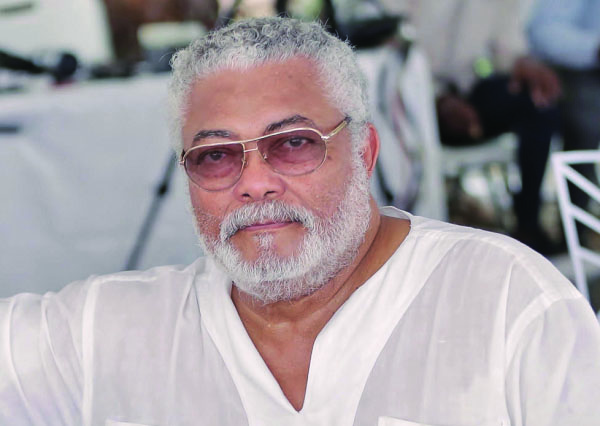 For four days last week, a grateful nation of Ghana closed shop to honour with dignity her favourite son Jerry John Rawlings. He had fallen to Covid -related death two months after burying his mother. This is not a tribute but a recap on a life dedicated to service. JJ or Junior Jesus as some Ghanaians called him was a true servant leader.

His life is high-lighted so that other African leaders can juxtapose their governance style against that of JJ.
Many people forget that JJ Rawlings carried out an abortive coup for which he was arrested, tried and sentenced to death. The important point is that during the trial, he asked the military tribunal to free the other NCOS charged with him since in his own words he was the brain behind the entire exercise. He was condemned to death by firing squad. Before the sentence could be carried out, non-commissioned officers broke the prison gates and catapulted him to Commander in Chief of Ghana Armed Forces. He refused to promote himself and remained Flt Lt till death.

His trial and subsequent execution of former Ghanaian leaders can be assessed against this background. As a person I do not think that killing people is an acceptable way to change government but that argument is for another occasion. Jerry Rawlings saw his ascendency as a revolution and expected most Ghanaians to fall in line. A majority did. He refused to promote himself and remained flight lieutenant until death. He said at the beginning that he was in power to make a difference to the lives of ordinary people and that not all African leaders can be tarred with the same brush of corruption. Corruption was anathema. He was a maverick, led by example and ordinary people had access to the Castle Osu which was the Presidential palace

His wife who was a soulmate from school at Achimota was asked to mobilize women. In her tribute read by one of her daughters, she expressed shock that when she asked for funds to execute the women’s project, JJ told her there was no budgetary allocation and she should devise ways to raise funds on her own. The children also highlighted shortcomings in time spent with them by their father. Rawlings had shortcomings but these are prices paid for integrity and commitment.

When the Ghanaian economy collapsed and the Cedi was worthless, Ghanaians moved to Nigeria in troves. On Rawlings assumption of power, in the midst of ‘Ghana must go campaign’, He mobilized all available vessels both military and civilian and repatriated 2.1 million Ghanaians back from Nigeria and restored their dignity.

Several tributes by many people highlighted zero tolerance for corruption as recorded by international organizations such as Transparency International. This is not an x-ray on corruption but Nigeria has this knee jerk reaction once international bodies release their periodic reports. Transparency International recently released a report rating Nigeria as the second most corrupt country in West Africa. As usual our Minister of Information called a press conference to fight back. The whole scenario reminds one of the Ostrich burying its head in the sand. Anybody who does business in Nigeria knows that corruption is systemic and endemic. It is a sharped embedded in a major vein of the Nigeria psych. Between corruption and malaria one will find it difficult to decide which is bigger threat to the survival of Nigeria. The government in fact provided the evidence because two leaders of the government set up anti-corruption agencies are currently on trial for corruption.

In governance, there is only one way to go and that is the path of probity. Praise singers and sycophants can deceive for a while but history written by the likes of SJS Cookey, Adiele Afigbo and Obaro Ikimi will record the events as they actually occurred.

As we watched JJ Rawlings for the best part of four days, we could but be filled with nostalgia at what possibly could have happened in Nigeria. The outpouring of affection from Ghanaians right from the President Nana-Akufo Addo down to the sentry guard at Castle Osu was overwhelming. One lady was so filled with grief and in between streams of tears said their regret was that JJ did not build a house in his home town where they could go on pilgrimage. The President Nana-Akufo Addo in his tribute said on a number of occasions he has asked JJ for permission to name a port or a university after him but he turned down all such offers. At his death however he again discussed with his family and the new University at Tamale will be called Jerry Rawlings University. JJ was a true servant-leader.

Nigeria was missing as we were neither mentioned from the podium and there was no tribute. The National Assembly has oversight functions on the Ministry of Foreign Affairs and Nigerians will like to know why we were missing in action. The other countries were represented by their Presidents or Prime Ministers. You cannot claim to be leading from the rear. Not long ago, Ghana celebrated twenty years of uninterrupted electricity in towns and villages and we are still faffing around from one administration to the next.
May the Angels of God direct JJ a baptised catholic to his earned rest. Africa says JJ Rawlings fair thee well.